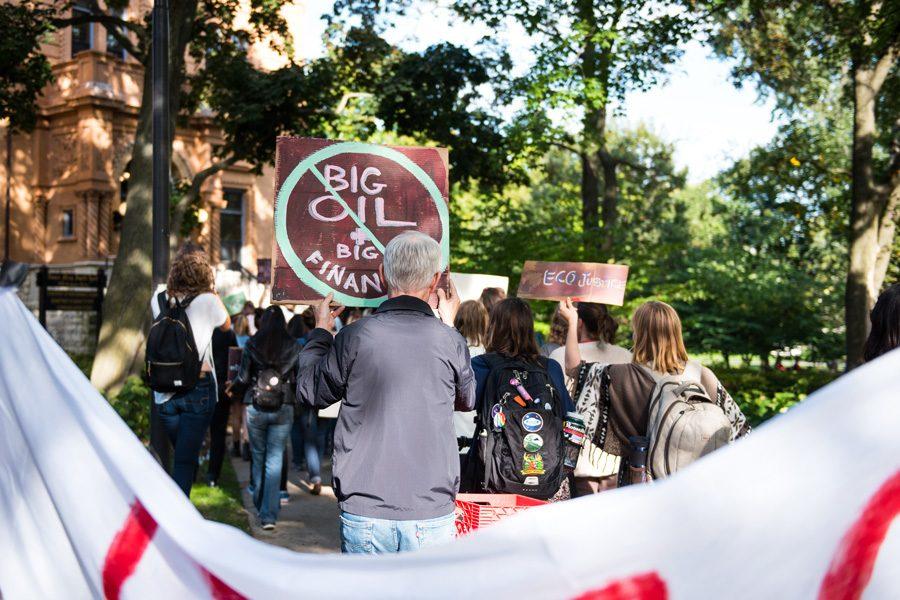 Dozens of people gather at The Rock on Monday to protest the Dakota Access Pipeline. Protesters chanted, “Water is life. You can’t drink oil,” as they marched from The Rock to Norris University Center.

About 50 people gathered at The Rock on Monday afternoon to protest the Dakota Access Pipeline for this year’s Indigenous Peoples’ Day.

The rally was organized by the Native American and Indigenous Student Alliance along with the American Indian Center-Chicago. Fossil Free NU was also present and collected clothing that will be donated to pipeline protesters.

The Dakota Access Pipeline, which was proposed to tap into undiscovered oil and reduce foreign oil dependency, will span more than 1,000 miles between Illinois and the Dakotas if completed. The Standing Rock Sioux Tribe said in a federal complaint that the pipeline “threatens the Tribe’s environmental and economic well-being, and would damage and destroy sites of great historic, religious, and cultural significance to the Tribe,” according to CNN.

Ninah Divine (Weinberg ’16), who is Cherokee and serves as the coordinator of the Native American and Indigenous Peoples Steering Group, provided background on the pipeline for the crowd.

“Should it burst or break or anything happen, it’d be damaging to sacred land as well as the water supplies,” said Divine, who was a member of NAISA as an undergraduate.

A sign over The Rock read “#NoDAPL” and expressed “solidarity with the Standing Rock Sioux against the Dakota Access Pipeline.”

Al Eastman, a Lakota archery teacher at the American Indian Center-Chicago and an organizer for Chicago in Solidarity with Standing Rock, also helped put on the event. He urged those present to “put our bodies on the line” against “this desecration of our earth.”

“There’s generations of people who have fought long and hard for their land, for future generations,” Eastman said. “We need people like you to come together, to call your politicians, to call banks … to let them know that we disagree with this movement poisoning our waters. Water is life. You cannot drink oil.”

These words were the cry of the rally as the group marched from The Rock to Norris University Center chanting, “Water is life. You can’t drink oil,” and “Haha, hoho! The DAPL has got to go!”

The protesters also held signs with slogans such as “Sustainable Energy Now” and “Water Is Sacred.”

Weinberg senior Yoseline Huerta, who attended the rally, said it is important for non-Native American students to recognize the history of the land on which they live.

“I identify as Chicana, so a lot of the spaces I’m in … believe in solidarity work,” she said. “The reason why we’re here is to support the indigenous folk in their struggles.”

Organizers encouraged students to continue involvement with the issue in a variety of ways, including donating to Fossil Free NU’s clothing drive, informing other student groups and speaking to businesses and politicians.

Eastman told The Daily that holding the rally at NU was important because there is not a large Native American population on campus. It is important to find different resources to fight the implementation of the pipeline, such as engineers, medicine and even basic tools, he said.

“This is environmental justice, but also (fighting) environmental racism,” Eastman told The Daily. “This is a higher education institution where hopefully like-minded people can bring out more awareness and more support.”