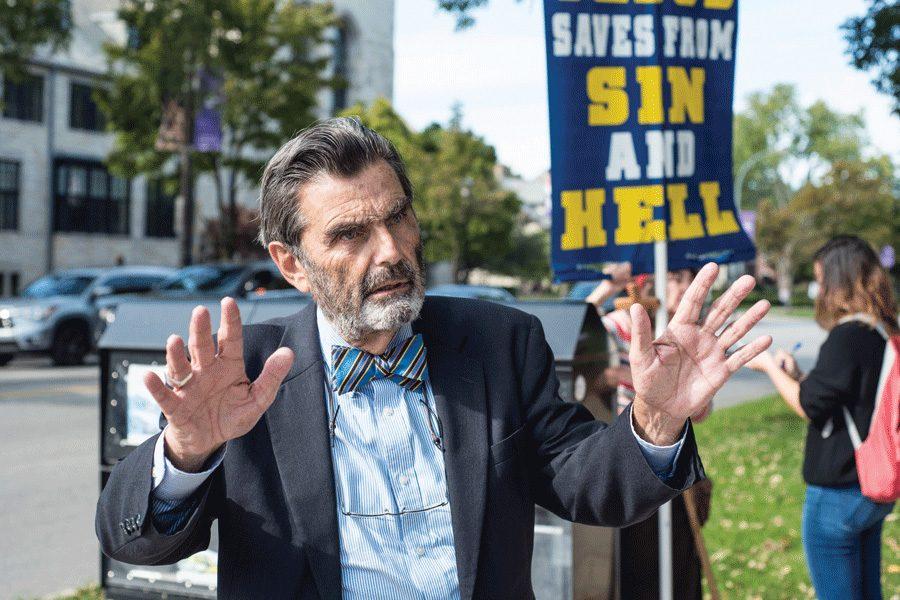 Jed Smock preaches to NU students about sin during a demonstration at The Arch on Monday. Smock is the president and founder of The Campus Ministry USA, a conservative religious group from Terre Haute, Indiana.

Led by founder and president Jed Smock, 73, the conservative religious group — based out of Terre Haute, Indiana — travels to college campuses nationwide preaching the gospel of Jesus Christ, but with a twist.

“When you smoke the pot, the gay demons come and start talking to you,” said Cindy Smock, who is married to Jed Smock, as she engaged with students who questioned why smoking weed is a sin.

One demonstrator held a sign that listed various types of sinners whom the group said should repent. The list included “feminists,” “lesbians,” “sodomites,” “masturbators,” “fellatists,” “baby murderers,” “gossips,” “non-Christians” and “vixens,” among other things.

With the presidential election drawing near, the group expressed support for Donald Trump during their demonstration. Jed Smock said they decided to come to NU because he believes its students are predominantly liberal.

“Liberals need to hear what I have to say because they tend to be more agnostic and atheistic than conservatives,” Jed Smock told The Daily.

The group was met with anger from some students who said they were insulted — and laughter from others. The police were also called twice in an attempt to remove the group from campus. However, they were protected by the First Amendment, Cindy Smock said.

Some students, including Weinberg freshman Michael Iverson, got into heated debates with Jed and Cindy Smock. Jed Smock approached Iverson and asked the student if he is gay.

Iverson said he was offended by Jed Smock’s assumption about his sexual orientation based on his appearance.

“I’m not just a homosexual, and he has basically degraded a lot of people here to being just a label and being just a sin,” Iverson said. “I’m a person as well.”

In addition to condemning gay people, Jed Smock shouted women should remain virgins until marriage and that men are not attracted to women with small breasts.

His comments about women’s appearances provoked Weinberg sophomore Hayley Platt to remove her sweater and confront him in a tight-fitting, black top.

“What he was saying made me really angry, so I just wanted to do something,” Platt said.

Other students used humor to deal with the situation, laughing at Jed Smock’s claims while recording the demonstration on video or live streaming it to Facebook, McCormick freshman Danny Callahan said.

“People think it’s very funny, but I would say deep down everyone knows that what he’s saying is wrong,” Callahan said. “They’re making a mockery of him to dull down the situation.”

Jed Smock is used to it, though: After more than 40 years of visiting college campuses, he said the group is unfazed by harsh backlash and wants people to be angry.

Jed Smock also told The Daily he was disappointed by the response from NU students because he did not think they had “rational arguments” or “asked intelligent questions,” but were just “emoting” instead.

“They’re the past,” Platt said. “This is not the future of America, so they’re losing their grip on what they see as their America, but their America doesn’t exist anymore.”