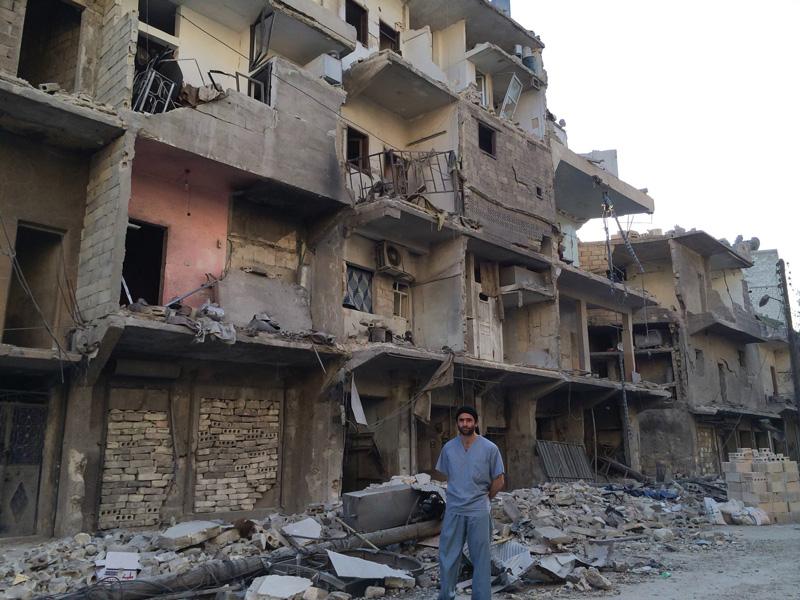 Most of the year, orthopedic surgeon Dr. Samer Attar can be found at Northwestern Memorial Hospital, where the facilities are top of the line and there is no shortage of trained doctors, nurses and support staff.

But the conditions are different at the underground trauma center in Aleppo, Syria — located about 800 meters from the front lines — where Attar spends a few weeks each year volunteering to save the lives of war victims.

In Syria, Attar sees up to 50 patients at once and has a small staff to help him.

“It’s the same job I’m doing in Chicago, but in Syria, the impact is so much more palpable,” Attar said. “You see people bleed to death in front of you, and there’s little you can do. You can’t save all of them.”

Although he was born and raised in Chicago, Attar’s parents are both from Syria. His ancestry and desire to help others motivated him to volunteer with the Syrian American Medical Society — a non-profit, humanitarian organization that sends physicians to countries such as Syria, Turkey, Jordan and Lebanon — and the Aleppo City Medical Council, he said. Attar’s first trip to Syria was in the summer of 2013, and he has returned multiple times since then.

“I was given the opportunity to grow up in this country and become a surgeon, so when I learned about what was happening to the Syrian people, I just felt obligated,” he said. “I felt like I needed to play my part and give back, even if it’s for a short period of time.”

In Syria, the need for doctors is constant, but the difficulty lies in finding volunteers, said Syrian-born Dr. Zaher Sahloul, who travels to his homeland for medical missions. Many doctors want to go on medical missions to help those in need, but they do not want to risk their lives, said Sahloul, a critical care specialist at Advocate Christ Medical Center in Chicago.

Not many American doctors would be willing to do what Attar does, said Dr. John Kahler, an outpatient physician and pediatrician at Access Community Health Network in Chicago.

“Sam is one the most selfless physicians I’ve ever met in my life,” said Kahler, who volunteered in Syria with Attar. “He is serious, dedicated, and he’s humble. He personifies what you would call a humanitarian physician.”

At the trauma center in Aleppo, most of the staff Attar worked with were volunteers without formal medical training, he said. Janitors would perform CPR, while 20-year-olds administered anesthesia using skills learned from observing other doctors.

Recently, the trauma center was bombed “so severely and with such intensity that it is now inoperable and not salvageable, and nobody’s there anymore,” Attar said.

Sahloul said foreign volunteers like Attar do much more than save lives — they spread awareness about Syria’s health care crisis. He, Attar and Kahler have all been interviewed about their experiences and have individually authored opinion pieces on the subject.

“Every physician should feel like they have to be vocal about what’s going on,” Sahloul said. “You have a crisis where physicians are dealing with very limited resources. We have to extend a hand of relief to them and be their voice to the international community.”

Currently, Aleppo is under siege, and the road into the city has been shut down. No one can travel in or out, but Attar said he remains hopeful.