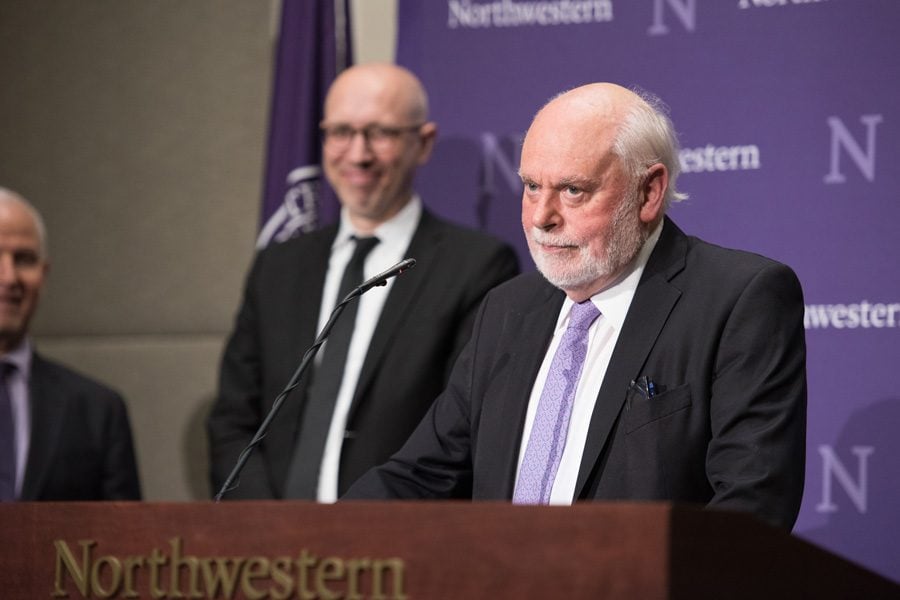 Chemistry Prof. Sir Fraser Stoddart speaks at Hardin Hall on Wednesday. The University held a reception for Stoddart after he and two other scientists received the 2016 Nobel Prize in Chemistry.

“The development of computing demonstrates how the miniaturization of technology can lead to a revolution,” the Royal Swedish Academy of Sciences said in its announcement. “The 2016 Nobel Laureates in Chemistry have miniaturized machines and taken chemistry to a new dimension.”

The prize is the second Nobel Prize awarded to a member of Northwestern’s chemistry department, after the late John Pople received the prize in Chemistry in 1998, according to a news release.

Zhichang Liu, a postdoctoral fellow in Stoddart’s laboratory, said he was excited about the Nobel Prize announcement. Liu said his mentor is an energetic and passionate scientist — the first one to reach the lab in the morning and the last to leave.

The University held a ceremony in Hardin Hall on Wednesday morning to celebrate Stoddart’s achievement. University President Morton Schapiro and the Nobel laureate both gave remarks during the event.

Schapiro said Stoddart’s win came just in time for the annual International Institute for Nanotechnology Symposium, which will be held Thursday at the Hilton Orrington. He said most people want to build on the work of those who came before them, but Stoddart created his own field.

“Your contributions to that field, of course, are legendary,” Schapiro told Stoddart.

During his speech at the ceremony, Stoddart emphasized the importance of collaboration in science and said it is necessary to support basic science that can lead to future discoveries.

Stoddart told The Daily he hopes the award will open up the possibility of Northwestern scientists winning future Nobel Prizes in chemistry, physics and medicine.

Each year, the University’s chemistry department ranks at “the very top of the league,” Stoddart added.

“The world has to catch up with this more instant type of recognition,” he told The Daily. “It will help that I’ve got a Nobel Prize because that then raises the attention of the more traditional people in assessing the importance of our department. It can only be good news for Northwestern.”