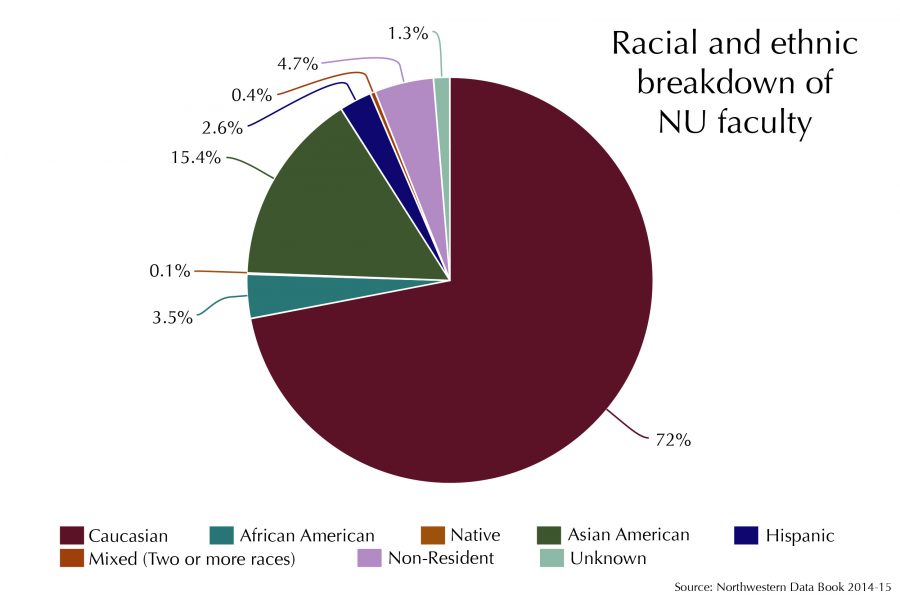 Two weeks after a report recommending Northwestern hire more diverse faculty members, some of the University’s black professors have said not enough has been done to create a better environment for both black students and faculty.

McCormick Prof. Russ Joseph said NU has to prioritize recruiting black faculty, and to do that, it must look beyond its usual networks and have a diverse search board.

“It does make a difference, the ability to see people who look like you, who have similar backgrounds to you,” Joseph said. “The lack of those types of role models … has very negative effects. I know that personally.”

The Black Student Experience Task Force reviewed surveys and held focus groups to write the 150-page report, which includes 14 recommendations to improve the experience of black students at NU.

The report recommends the University increase the number of black faculty, who make up only 3.5 percent of the University’s total faculty, according to the most recent data released by NU from the 2014-15 school year. The report also says NU should expand its “efforts to increase the pipeline of Black faculty” by investing in programs and research opportunities that benefit black faculty, saying it should form a cohort of minority faculty who will assist in recruitment and development processes.

African American Studies Prof. Debra Thompson said increasing the number of faculty of color broadens students’ horizons, especially when they have mentors who look like them. Particularly in science, technology, engineering and mathematics fields, students are discouraged because they don’t have a firm foundation of support throughout their education, she said.

Only five African American professors taught in the McCormick School of Engineering and Applied Science out of the school’s 231 faculty members in 2014-15, according to NU data.

He said even now, as a professor and member of the research community at large, the lack of diversity in STEM fields continues to affect him.

“If I look across the room and I look at my other colleagues at the university or in other technical venues or conferences, there are not a lot of black faculty,” Joseph said. “You notice that.”

Thompson added that a greater number of faculty of color is especially necessary because they serve as mentors outside of the classroom. Students of color frequently come to faculty of color to talk about subjects beyond classroom material, “informal” work that isn’t recognized by universities, Thompson said.

“Without our mentorship, we know students are less likely to succeed,” she said.

Medill Prof. Ava Greenwell (Medill ‘84, ‘85, Weinberg ‘14) said although she believes representation in NU’s faculty has improved since her time as a student, it is not dramatically better.

Greenwell said she was saddened by how September’s report echoed a report published in 1968 — the same year the Black House was founded — by black NU community members unhappy with the way the University treated students of color.

“Definitely I would say the student body is more diverse, not necessarily more African-American students, but more diverse,” Greenwell said. “(The black student experience) is one we should particularly pay close attention to because … unfortunately it hasn’t flown upwards consistently enough.”

She said NU needs not only to increase the number of black professors but also Hispanic faculty. She said the the country’s population is “browning,” so Northwestern’s faculty population should do the same.

Beyond NU, having few black professors can skew a student’s perspective of leadership, Thompson said. Hiring more black faculty will normalize the idea that people of color have equal potential, she said.