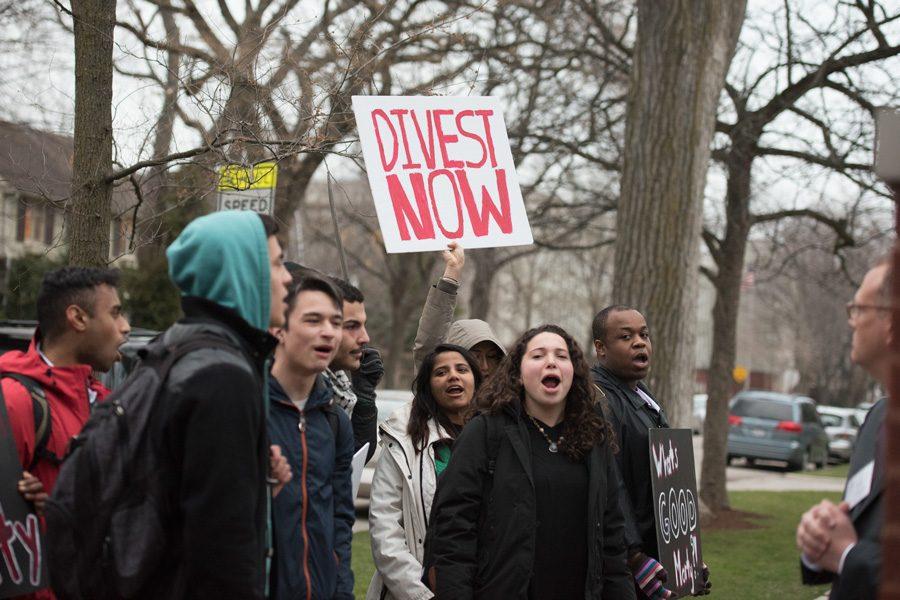 Northwestern student leaders are concerned by discussions surrounding the socially responsible investment committee charter after their most recent meeting with administrators two weeks ago, in which the students said administrators did not include many of the proposed changes discussed in June.

After the June meeting, divestment leaders from Unshackle NU, NU Divest and Fossil Free NU, as well as Associated Student Government were under the impression that the University would drop two major components of the charter. One was that University President Morton Schapiro has to approve all voting members of the committee, and the other was that Chief Investment Officer Will McLean only has to forward recommendations of the committee to the Board of Trustees if he concurs. However, according to a copy of the charter obtained by The Daily, both components remained as of two weeks ago.

The groups met with administrators in June to review the charter, and they settled on some changes to be made, said ASG president Christina Cilento, a SESP senior. Cilento said McLean and the University’s general counsel were “largely agreeable” to the proposed changes.

“It seems like a lot of the key items that we fought for in that June meeting didn’t end up being altered, which is disappointing,” Cilento said.

The leaders also said they’re concerned by a new stipulation saying the committee’s chair can only present proposals to the Board of Trustees once a year. Students found the stipulation in the most recent charter draft during the meeting held two weeks ago.

Originally, student leaders thought they would present to the board once a quarter, said Scott Brown, a Medill senior representing Fossil Free NU at meetings.

Brown, a former Daily staffer, said that particular stipulation forces campaigns to wait an entire year before getting to approach the Board of Trustees, which he said kills momentum and students’ ability to organize — especially considering the short time period students spend at NU.

“It’s frustrating because we verbally agree on things during the meetings, and then they go back to their people and come back to us with something completely different,” said Weinberg senior Marcel Hanna, a member of Unshackle NU. “These stipulations completely invalidate the integrity of the committee — there’s essentially no difference between this and an ASG resolution now.”

McLean told The Daily in an email that administrators made “great progress” over the summer discussing the construction of an advisory committee.

Student leaders have been “very responsible and passionate” regarding their views, McLean said, but he added they are only one of the multiple constituents involved in the process.

In March, the University announced plans to create a socially responsible investment committee to advise McLean and Schapiro. The committee was to include alumni, students, faculty and staff, Schapiro and McLean wrote in an email to divestment leaders and members of ASG at the time.

NU Divest, Unshackle NU and Fossil Free NU presented a first draft of the charter at the end of Spring Quarter. Nearly two weeks ago, administrators responded without many of the proposed changes that had been discussed, Hanna said. The groups’ leaders expect to hear again from administrators about the charter on Wednesday.

Hanna said administrators are trying to “dilute” the charter because they want something the Board of Trustees can approve. Hanna and other divestment leaders are wary of a weaker charter becoming a bureaucratic obstacle that could be used against other campaigns and student groups in the future.

“The board doesn’t care and that’s the message we’re getting,” Hanna said. “The board doesn’t want to bother itself with this, and they want to spend as little time as possible discussing this. The board is unwilling to compromise or to give this committee any power and (the) administration is being complicit to whatever the board wants.”

In November 2015, NU announced plans to sign the United Nations-supported Principles for Responsible Investing. Hanna said he believes the socially responsible investment committee just wants the Board of Trustees to abide by the principles they say they want to abide by, which is why Hanna said McLean should not have veto power against the committee’s recommendations.

“Our peer institutions have these committees, but none of theirs have any power — it’s just a formality,” Hanna said. “We have this opportunity to form the committee now, and I think we have to focus on forming one with integrity as well as the power to check the board and make these dealings transparent. What we’re pushing for is a committee with a purpose.”

McLean said the parties are nearing agreement on the charter.

“We are very close to a finished product, so negotiating in the press makes no sense at all,” McLean said in the email. “I will say however that given that President Schapiro has been the driving force to establish this committee, he will absolutely have the authority to approve the members and the committee chair.”

“If we’re going to establish this committee, then it should be our direct avenue to the board because that’s the whole point of the charter,” Hanna said. “But administration seems to be okay with a toothless committee, which raises doubt about their intentions in creating this committee.”