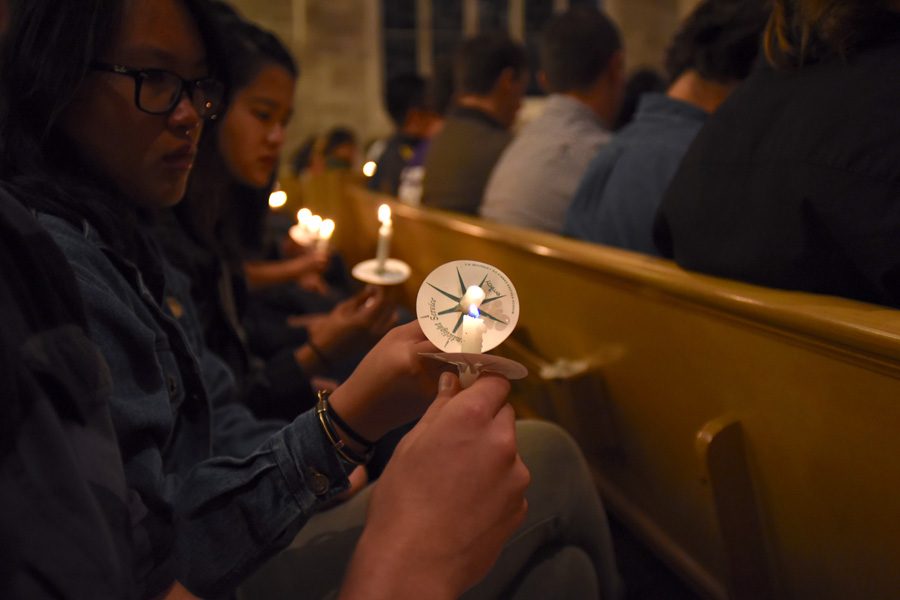 Students light candles during a memorial for Chuyuan Qiu on Friday evening. More than 650 people filled Alice Millar Chapel for the service and remembered Qiu for her excitement to be attending Northwestern and her lighthearted attitude.

More than 650 students, faculty, administrators, family and friends filled Alice Millar Chapel on Friday evening for the memorial of Chuyuan “Chu” Qiu. The 18-year-old Weinberg freshman died in a bicycle accident Sept. 22 after being struck by a cement truck. The memorial service was organized by Associated Student Government and featured prepared statements from faculty, students and family, who remembered Qiu for her excitement to be attending Northwestern and her lighthearted attitude.

University Chaplain Tim Stevens and Patricia Telles-Irvin, vice president for student affairs, opened the evening with remarks on Qiu’s eagerness to begin her time at NU. Qiu, a native of Nanjing, China, was a resident of the Residential College of Community and Cultural Studies and a member of the Kaplan Humanities Scholars Program. She looked forward to joining a variety of student groups, including ASG, Telles-Irvin said, and wore a purple gown to her senior prom to celebrate her admission to NU.

“She came to Northwestern with great enthusiasm and pride,” Telles-Irvin said. “She was our ideal student.”

“I never would have thought that conversation would be the last one she would have on this earth,” Newman said. “So long as I live, I will never forget you.”

Hong Lei, consul general of the People’s Republic of China in Chicago, also attended the memorial. Hong helped Qiu’s family quickly acquire documents to come to the United States for the service. In addition to Qiu’s father, several other relatives visited for the memorial service.

Qiu’s cousin read a message in Mandarin Chinese that Qiu had written when she was admitted early decision to NU. Describing her eagerness to “study hard, play hard,” the message encapsulated Qiu’s goofiness and love of life, her cousin said. Qiu looked forward to many aspects of NU, her cousin read, including Dillo Day, joining Greek Life, the Evanston restaurant scene and being able to “enjoy the courses rather than pursuing a result.”

Although Qiu had been on campus for only a short time, she made a great impact on the NU community, said Christina Cilento, president of ASG.

“We’re all so shocked and saddened to be here so close to the start of the school year and to a student so young,” the SESP senior said. “Too few of us knew her, but I know Chu loved Northwestern. I want her family to know we loved her back.”

Qiu’s father read a letter in Mandarin Chinese he wrote to his daughter while on his flight to the United States for the memorial. He was happy Qiu could realize her dream of studying abroad in the United States, he read, but when he heard the news of her death, “the sky fell.”

“You are our pride … we love you so much, especially now. Can you feel it?” he said. “There was so much we could have done … Let me render you more love in our next life.”