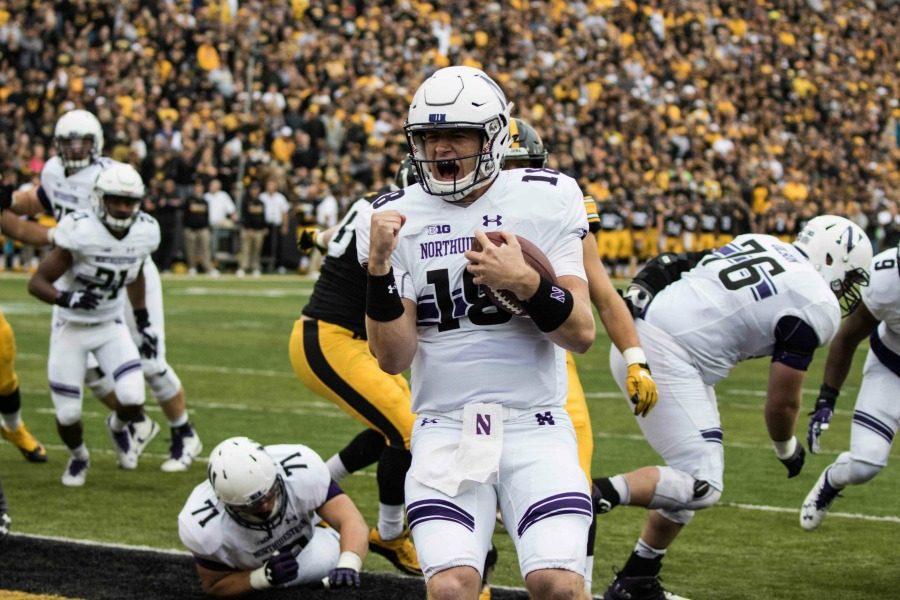 Clayton Thorson celebrates a score. The sophomore quarterback and Northwestern will play in the Pinstripe Bowl on Dec. 28.

IOWA CITY, Iowa — With its season seemingly teetering on the brink, Northwestern came up in the clutch.

Impressive play from junior running back Justin Jackson and senior wide receiver Austin Carr powered the Wildcats (2-3, 1-1 Big Ten) to a 38-31 come-from-behind win, spoiling the Hawkeyes’ homecoming game. NU’s 38 points were its most against Iowa (3-2, 1-1) since the 1996 Big Ten champion season.

Coach Pat Fitzgerald said he was pleased overall with the win, noting the perseverance of his team after blowing an early 10-point lead.

“We had to avoid the first-round knockout,” Fitzgerald said. “Kinnick (Stadium) and the Hawkeyes, they knock a lot of teams out … in the first 15 minutes, and for us to weather that storm and not flinch after they went on a 17-0 run, I thought showed maturity.”

For much of 2016, the Cats’ defense has underwhelmed as injuries plagued the secondary, with junior cornerback Keith Watkins II out for the season and defensive backs Matthew Harris and Kyle Queiro having missed time. Coming into Saturday, NU allowed an average of 435 total yards and had just given up 556 yards in a loss to then-No. 20 Nebraska, its highest total allowed since 2012.

But needing a win to prevent the season from spiraling out of control, the Cats held Iowa to just 283 yards, including just 79 on the ground. Furthermore, redshirt freshman cornerback Trae Williams sealed the victory in crunch time, intercepting Iowa quarterback C.J. Beathard in NU territory with just under a minute to go.

Junior linebacker Anthony Walker, who recorded a season-high 10 tackles in the win, praised Williams after he was forced into the starting lineup.

“Trae’s a focused guy; he comes in every day and works hard. I knew he was going to make a play,” Walker said. “Coming off of last week giving up the big play and then this week making the big play, it’s a great response by him. Being able to come up at the right time and make a play, that was great.”

The defense also suffered a scary moment in the third quarter, as junior linebacker Brett Walsh was injured on a kickoff return and needed to be carted off the field on a stretcher. Fitzgerald said after the game that all tests came back negative and that Walsh would travel back to Evanston on Saturday night.

On the other side of the ball, NU’s offense exploded, putting up its highest point total of the season and most in a road game since November 15, 2014, when the Cats upset Notre Dame 43-40 in overtime. Jackson’s 171 rushing yards were a season high, and Carr established a personal record with three touchdown catches.

Jackson’s longest run of the day, a 58-yard scamper to the end zone, put NU up for good late in the third quarter after the teams traded leads in the first half. Coming off three straight games he failed to reach the century mark on the ground, Jackson said he was happy to turn in a big performance.

“There was a pretty big seam, and it was just me and the safety,” Jackson said of the run. “I had been putting my head down early in the game, so I tried to just make a move and after that it was me trying to get away from the guys.”

Historically a team that struggles in October, the Cats’ schedule only gets tougher from here. After next week’s bye, NU will face No. 17 Michigan State and No. 2 Ohio State in a three-week span before the end of the month.

Fitzgerald said though he was impressed with the way the team handled itself in a “hostile” environment, the upcoming games in East Lansing and Columbus will be difficult.

“After a couple weeks you know what you have and what you don’t have,” Fitzgerald said, reiterating a point from his Monday press conference. “We’ve got to squeeze everything out of this group, and I think they’re coming along with us.”