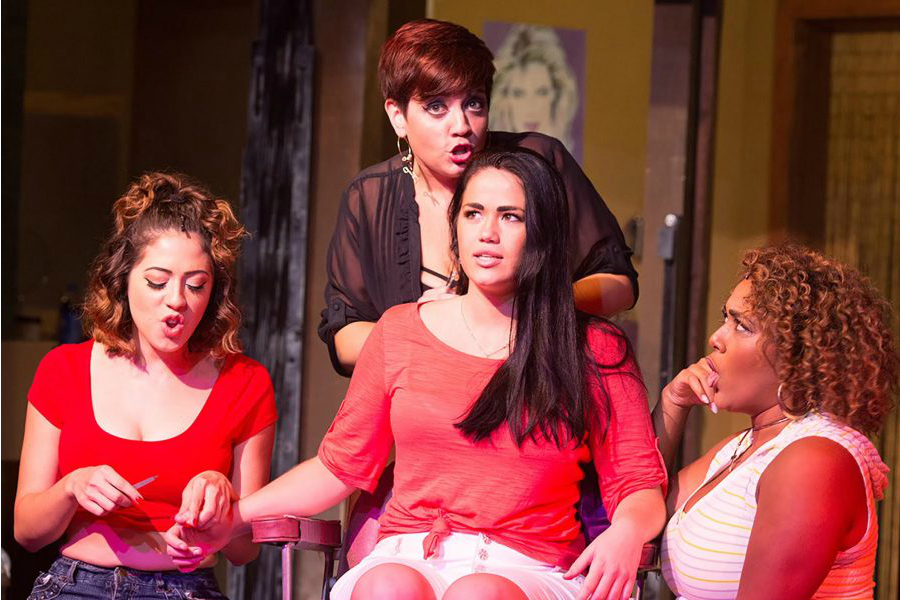 When Lucy Godinez takes the stage in Chicago’s Porchlight Music Theatre to portray Nina Rosario in Lin-Manuel Miranda’s “In the Heights,” she says she looks at the crowd and recognizes the awe in their eyes as they see a little bit of themselves being portrayed on stage.

“Last weekend there were two adorable young Latina girls who were in these really nice little dresses and nice shoes watching the show and seeing representations of themselves on stage,” said Godinez, who identifies as Latina. “That is why the show is so special. It is the most incredible thing.”

A Communication junior, Godinez has been starring in the production since it first opened on Sept. 13. The show, penned by Miranda — of “Hamilton” fame — tells the stories of a group of young men and women of color as they struggle to get by in a small Hispanic community in New York City’s Washington Heights neighborhood.

Nina, Godinez’s character, is the neighborhood’s “good girl” who has just returned from her first year at Stanford. The community is overjoyed to see her, because she’s the one who made it “out,” the one everyone pinned their hopes and dreams to.

But in the opening scene of the musical, Nina reveals she dropped out of college after feeling overburdened. The young Latina woman must then decide what to do with her life as her parents struggle with maintaining their small business afloat while she falls in love with Benny, who is black, and whom her father doesn’t approve of.

For Godinez, landing the role of Nina was a dream come true.

The 20-year-old actress is one of the youngest artists on stage, and although having this role means she has less time to do her class readings, she said the experience so far has been worth it.

“It’s nice to be in a show where my significance on stage is not my race,” she said. “I’m not there as the token this or that. I’m there because (Nina’s) identity is central to the character … She’s fully three-dimensional, as are all of the other characters on stage.”

All the characters in Miranda’s show are people of color. Godinez’s co-star, Michelle Lauto, who also identifies as Latina, plays Vanessa, a young woman with dreams of leaving the neighborhood. Both Lauto and Godinez said opportunities present in shows like “In the Heights” are necessary to remind aspiring Latinx actors that spaces where they can play non-token Latinx characters exist.

Porchlight Theatre, which Godinez said has a history of reaching out to marginalized communities and actors of color, seats about 150 people, giving the Tony award-winning musical an intimate touch.

This setup leads to closer, more intimate relationships among actors on stage, which is obvious when Lauto and Godinez appear together. Lauto, 25, said getting to play such a key character next to Godinez is rewarding because the young cast is full of energy.

“Normally I’m the youngest person in the room so then to walk into the room and be one of the older ones was really shocking,” she said. “No one is jaded yet … Everyone is hungry to do the work.”

A Second City Conservatory graduate, Lauto met Godinez during the show’s casting. At one point, they were both called back for the role of Nina. Though callbacks tend to be tense, Lauto said she and Godinez clicked immediately after they found themselves making each other giggle while waiting for their turn.

In the show, Godinez and Lauto’s characters are best friends. In real life, the actresses are also close. During the moments of the show when they’re not the focus of the scene, Lauto said she and Godinez crack each other up.

“I’m very proud of her,” Lauto said. “It’s funny because she’s like a little sister in some ways … I always shake my head at her and am like, … ‘You’re freaking talented.’”

Lauto said the show, which has been extended four weeks and has sold out every performance in the last week, makes her emotional because she thinks the cast looks like a “rainbow.” Shows such as “In the Heights” and “Hamilton,” she said, are just scratching the surface of what theater productions can do to improve diversity on stage.

“I love that we’re telling stories of people of color,” she said. “The next step now is to stop being afraid to cast us in shows that are not race-specific.”

Communication junior Andrew Restieri has casted Godinez in two Northwestern productions — 2015’s “Bonnie and Clyde” and 2016’s “The Drowsy Chaperone” — both of which she played a title character in. Restieri, who saw “In the Heights” a week ago, said seeing his friend on stage playing a Latina woman for the first time was thrilling.

Restieri said he was glad Godinez has the opportunity to portray a character so close to her own identity, especially because at NU, he said students of color are rarely given the space to play characters and put up shows that relate to their identities.

Restieri said he hopes to see her in “Hamilton” someday.

For now, Godinez, who is still unsure on whether she wants to fully pursue a theater career in New York or work as an advocate for Latinx rights in Washington, D.C., continues balancing the show with her first quarter of junior year. Although it can be exhausting, she said she’s just glad to play a character who’s so close to her own identity.

“I’ve never felt so lucky to be a part of something,” she said.