Men’s Soccer: Northwestern to face No. 1 Maryland after Michigan win 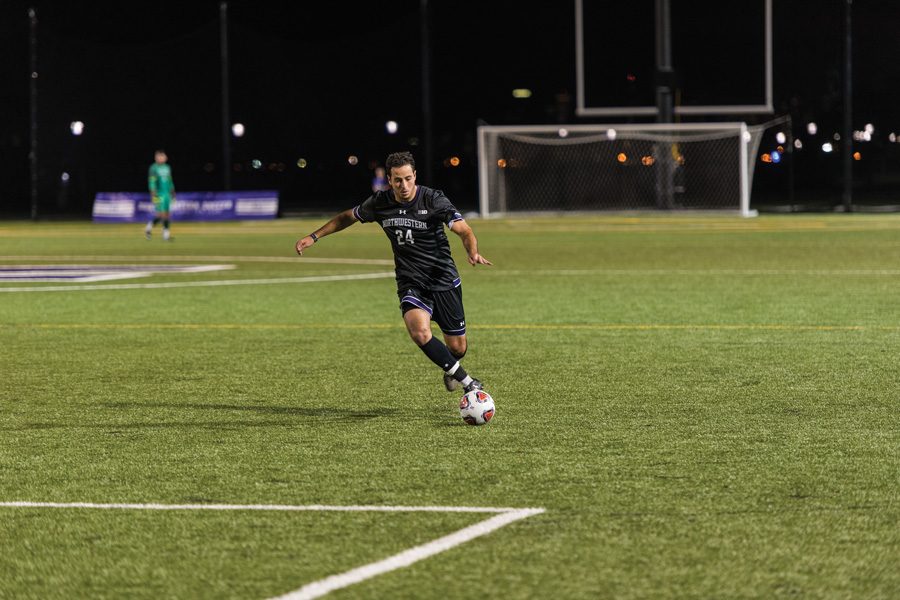 Drew Rosenberg approaches the ball. The senior midfielder helped set up the winning goal against Michigan last Sunday, giving Northwestern its first win in a month ahead of a matchup with No. 1 Maryland on Friday.

Sunday was a great day for Northwestern. After beating Michigan 2-1, coach Tim Lenahan left the field with a smile on his face, the rest of the team celebrating behind him.

“I’ll worry about Maryland tomorrow,” Lenahan said on Sunday as he prepared to leave the stadium after the team’s first win in a month.

So far this season, Maryland has faced four Big Ten opponents, including No. 6 Indiana, who they tied 1-1. Two weeks ago, NU tied then-No. 3 Indiana 0-0 in Bloomington.

After beating the Wolverines, the Cats hope to pull off a major upset against the Terrapins, whom they beat 2-1 in overtime last year during a home game at Toyota Park. Beating Maryland again this year would improve the Cats’ outlook after starting the season with six defeats in nine games.

Senior forward Mike Roberge, who scored the winning goal against Michigan on Sunday, said he is ready for the challenge.

“We’ve had two great results in the last three games, (and) last year we beat Maryland in overtime which was a great win,” he said. “I’m looking forward for the opportunity to play again; it’s always fun to play a Top 10 team.”

While NU needed two overtime periods to top the Wolverines, Maryland had no problem defeating then-No. 22 Michigan State 2-0 on Friday. During the game, the Terrapins took 11 shots to the Spartan’s five, though they benefited from a Michigan State own goal.

The Cats’ defense, the team’s strength, seems ready for Maryland after a solid game against Michigan. NU’s junior goalkeeper Francisco Tomasino registered six saves, while senior defender Nathan Dearth chipped in on the other end, assisting on both goals.

Meanwhile, junior forward Elo Ozumba was an offensive spark and scored the opening goal against the Wolverines. Ozumba’s speed made him dangerous against Michigan, and he has high hopes heading into the matchup with the Terrapins.

“We’ve always, historically, had a good game against Maryland so I think (the win against Michigan) helps us get our confidence up for that one,” Ozumba said.

It will be the third time the Cats have played the Terrapins since the team joined the Big Ten. In both previous meetings, NU has taken overtime wins. The last time Maryland was in Evanston, the Cats beat the newcomers 3-2.

This time around, the Terrapins are ranked No. 1 for the first time since 2012. Maryland forward Gordon Wild was named Big Ten Offensive Player of the Week twice in the last three weeks and has eight goals on the season.

Nevertheless, Ozumba said he feels ready to face the team.

“It’s going to be a big game,” Ozumba said. “We’re at home and we’re very excited to play them.”