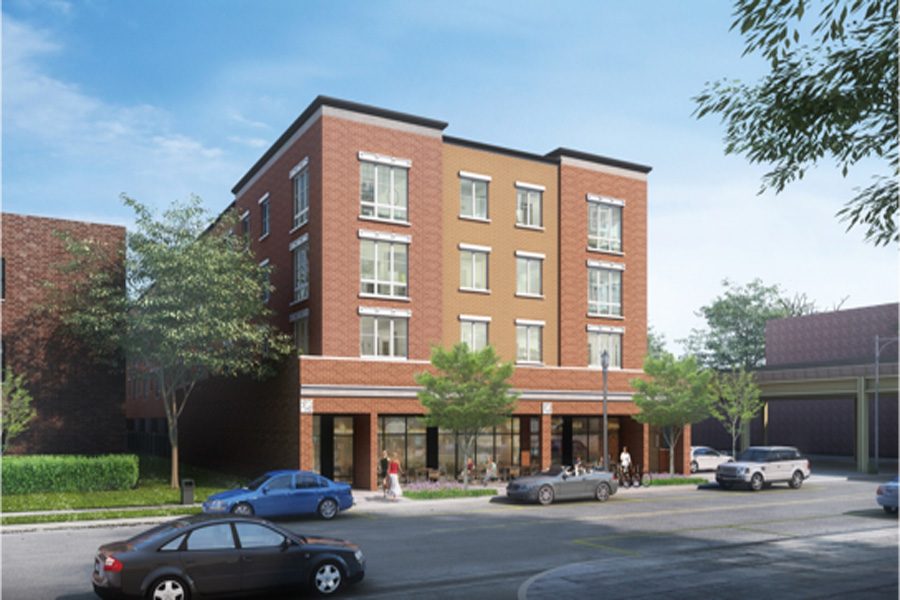 A rendering of the development at 824 Noyes St. The plan for the four-story building was approved by City Council on Monday.

A new apartment complex at 824-828 Noyes St. was cleared by aldermen at a City Council meeting on Monday.

Aldermen voted 8-1 in favor of the building’s construction. Plans for the complex were presented to the Planning and Development Committee earlier this month by Evanston resident and developer Greg DeStefano. The complex lies across the street from D&D Finer Foods and the Noyes Purple Line stop.

DeStefano plans to renovate the older, retail building currently located at the address into the new complex. The current structure, which is listed as “blighted,” will mainly consist of recreating the upper levels of the building, he said, with plans to keep the construction on the first floor, where the new retail space will be located. Several off-site improvements such as repaving, landscaping and replacement of a handicap crosswalk will cost about $139,000.

The apartments are set to house a diverse group of residents instead of focusing on a specific demographic, DeStefano said.

“We have a combination of studios, one bedroom and two bedroom units, and we’re expecting a community of students, young professionals and single parents with their kids,” DeStefano said. “We have four inclusionary housing units, so there’ll be affordable housing that meets the city’s new affordable housing ordinance that went into effect in January.”

The new affordable housing ordinance passed in November 2015 and motivated developers to build more affordable units in their projects by inducing a fee to those who neglect to build such units.

The exterior style of 824 Noyes is planned to differ from that of the surrounding buildings, DeStefano said, and apartments will feature loft style ceilings, recycled glass countertops, large windows, stainless steel appliances and a sit-down restaurant on the first floor. The restaurant is still in the concept phase and will bring economic benefits to the popular street, he said.

“It’ll have a more urban feel than a traditional one,” DeStefano said.

One of the issues with the project that worried aldermen was the current lack of sufficient parking spots surrounding the area. The streets and parking lots are already congested and the current plan to create 35 parking spaces for the complex won’t account for the greater influx of cars owned by the apartment residents, Ald. Eleanor Revelle (7th) said at a committee meeting earlier in the month.

“The Central Street area is really congested parking-wise, primarily because of the renewed economic activity provided by the restaurants and such,” Revelle said at the meeting. “We’re all delighted to have those restaurants, but there’s the spillover in terms of parking from the restaurants.”

Other aldermen were worried about the density of the apartments and the lack of open areas. Large windows are featured around the building’s exterior, but there isn’t a courtyard or garden in the complex’s center similar to other Evanston apartment buildings. The lack of outdoor spaces is potentially unhealthy and could be a dealbreaker for those looking to live in the new complex, Ald. Judy Fiske (1st) said at the committee meeting.

“Even the buildings built in the 1920s featured green space where people could come out of their units and enjoy at least a little bit of fresh air on site,” Fiske said. “Not so with this building, even though it’s on a very large lot that could accommodate some sort of green space on it.”

Fiske was the one dissenting vote.

The complex would be expected to pay an annual property tax of about $125,000 to Evanston and provide approximately 30 new permanent jobs.

DeStefano projected the building to be completed in June 2018.