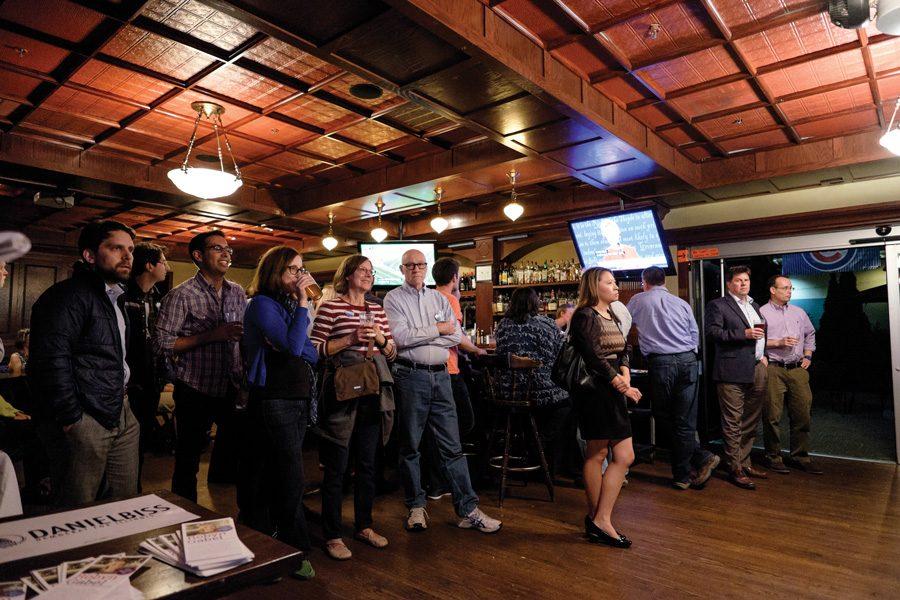 Laughter and clapping filled Tommy Nevin’s Pub on Monday night during the first presidential debate, as Hillary Clinton and Donald Trump squared off on domestic and foreign issues.

Biss said Clinton demonstrated her ability to serve as commander in chief, saying her composure makes her best suited for the job. Biss had opposite feelings about Trump, saying he was concerned with his ability to form political relationships.

“His approach to interpersonal relations, if imprinted on a global stage, would be dangerous to an extent that we can’t fully understand,” Biss said.

“People ‘ooh and ahh’ because what he says is so outrageous,” Phelan said. “People can’t believe what they are hearing.”

Although many at the event criticized Trump for not having concrete policy proposals, he did outline a tax plan during the debate that includes cutting the corporate tax rate from 35 to 15 percent. Trump also praised New York’s now-defunct stop-and-frisk law as a way to keep guns off the streets and crime down.

Trump also pointed to 200 generals who have endorsed him, saying their support is evidence he could lead the fight against the Islamic State.

Gabel said last night’s debate probably didn’t change the minds of those who think Clinton is unlikeable, but she said she doesn’t think Clinton should change her persona.

“Hillary is who Hillary is,” Gabel said. “It is hard for her to become somebody she is not. I think she presented a patient and very calm demeanor, but one that she was willing to give him a few zingers when he needed it.”

Gabel said Lester Holt, who moderated the debate, should have limited the candidates from interrupting each other, although she did appreciate Holt fact-checking Trump on his claim that he did not support the war in Iraq.

Christian Sorensen, campaign manager for Robyn Gabel, cautioned from putting too much importance on the first debate.

“The history of first debates show that it will have an impact until the next debate,” Sorensen said. “The reality is anything can happen. The history of the last few elections include natural disasters, financial crisis, and you tend to have an event that can define leadership over the last six weeks of a campaign, and that is a better indicator of who would be a better president.”