At memorial, friends and family remember Scott Boorstein as ‘the best of us’ 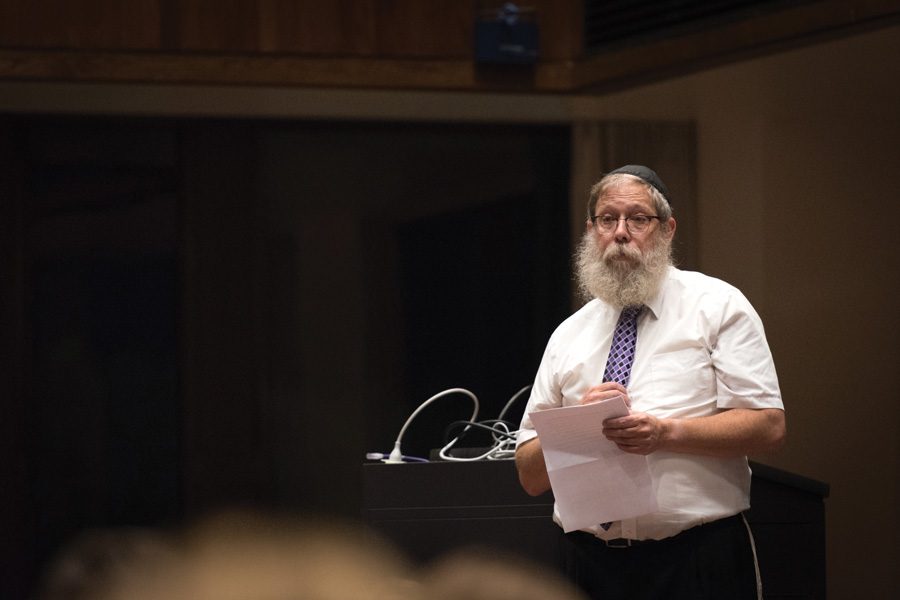 Rabbi Dov Hillel Klein speaks at a memorial for Northwestern student Scott Boorstein. More than 300 people gathered in the Louis Room of Norris University Center on Friday and shared memories of Boorstein.

“He was the selfless friend that would sacrifice anything and everything to make those around him happy,” said Ali Boorstein, his older sister.

Boorstein, a rising Weinberg senior from Riverwoods, Illinois, took his own life on Sept. 2. More than 300 people attended the memorial in the Louis Room of Norris University Center, and 1,100 others watched via a Facebook livestream hosted by The Daily. The University funded the catering for the event and helped facilitate it.

About a dozen people delivered prepared remarks during the memorial, which included a photo slideshow and a video montage of Boorstein’s life. Some of the videos showed Boorstein dancing at a concert, a surprise birthday celebration his friends organized for him and several of his friends saying what they will miss about him. The last hour of the event included an open mic session for attendees to speak on stage.

Ali Boorstein said her brother was excited about an internship he secured at his uncle’s company a few summers ago. But when a friend asked Scott Boorstein if there were other internship opportunities at the company, he offered the only spot to his friend, Ali Boorstein said.

Weinberg senior Daniel Polotsky, who attended high school with Boorstein and was his roommate at NU, said Boorstein was the best friend he could ask for.

“I was not the only person who felt this way,” Polotsky said. “Everyone who met Scott also met his compassion, his fun-loving nature, his selflessness and his drive to make people feel wanted.”

Nina Boorstein said her son was a very curious person. He enjoyed watching and playing “Jeopardy!” with his father and cared deeply about staying current on local and national events.

Boorstein was also passionate about Dance Marathon and Northwestern Capital Management, which is part of the Institute for Student Business Education, his mother said.

“How can we all be more like Scott?” Nina Boorstein said. “Be more curious, ask more questions, love a little more, be a little kinder, give an extra hug, smile a little wider, be a little gentler.”

Boorstein also served as the member at large in his fraternity, a position responsible for conflict mediation and brotherhood events, said Klein, who serves as the fraternity’s adviser.

“I have never seen a more dedicated member at large,” Klein said. “He put his all into the position, and when his brothers were going through a difficult time, he was there to support them.”

Marc Boorstein said his son was never boastful. In high school, Boorstein participated in DECA, a preparatory program for leaders and entrepreneurs. He won first place at a state competition in Illinois but didn’t tell his family about it, Marc Boorstein said. Instead, he described how fun the competition was and how well his teammates had done.

Boorstein always had a good word to say about other people, his father said.

“The last year or so, he started chastising us for having negative thoughts about anybody,” Marc Boorstein said. “He would always say, ‘Maybe they are having a bad day.’ It was really something to admire.”

Boorstein showed “unconditional love” to those he knew, Weinberg junior Brandon Piyevsky said. He let Piyevsky confide in him during some of Piyevsky’s toughest moments at NU, he said.

Not enough good can be said about Boorstein, Piyevsky said.

“Scott was, and forever will be, the best of us,” Piyevsky said. “Let’s be a little more like him every day. Let’s help each other like he helped all of us, and let’s love each other without even thinking about what we will get in return, just like he did.”