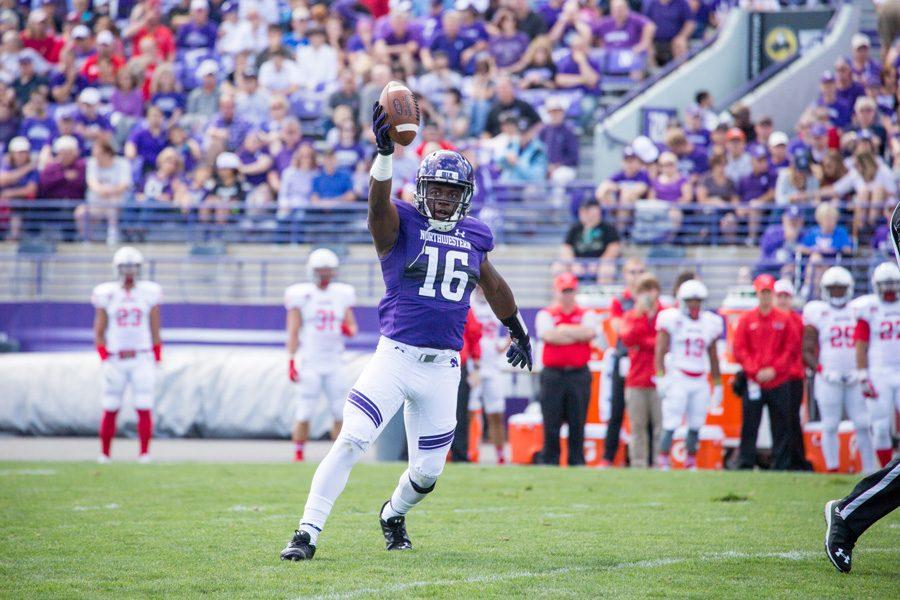 Godwin Igwebuike holds the ball in the air. The junior safety leads the Wildcats with four pass breakups.

Even after injuries to three-of-four preseason starters, Northwestern’s secondary can still claim to be the best unit of the Wildcats’ defense.

The revamped unit — Igwebuike, sophomore safety Jared McGee, sophomore cornerback Montre Hartage and redshirt freshman cornerback Trae Williams — held the line Saturday against Duke, limiting quarterback Daniel Jones to an inefficient 5.8 yards per attempt and coming up with an interception. It was a good, not great, performance, but that the “Sky Team” — the secondary’s self-appointed nickname — rebounded so quickly is nothing short of impressive.

“Obviously I had faith in them; they’re great players,” Igwebuike said when discussing McGee, Hartage and Williams. “You have the talent, you’re here for a reason, you’ve been grinding with us the whole time.”

Now the leader of the unit by default, Igwebuike has not shied away from the role and made an outsized impact in getting the rest of the secondary ready for game day, his teammates said. McGee pointed to Igwebuike as the guy organizing extra film sessions outside of practice, and true freshman cornerback Roderick Campbell described him as “a special player” who leads by example.

Igwebuike’s style is summed up well by his actions Saturday. The safety tweeted “Thanks for the int” a couple hours before kickoff — and then actually managed to pull off the feat during the game.

“It’s a bold move, but it shows a lot of confidence on his part,” McGee said. “For a guy to tweet that out and then actually make a play, that says a lot. I might actually try it myself for next week.”

Igwebuike has been critical in backstopping a pair of cornerbacks that had zero combined career starts coming into this season, though both Williams and Hartage have performed admirably on their own. Coach Pat Fitzgerald named Williams the Cats’ defensive player of the week for the game against Duke, noting the cornerback was 10-for-11 in coming up with defensive stops by his count.

Hartage, meanwhile, broke up what would have been a touchdown reception by the Blue Devils and has otherwise been resilient in coverage, recording 20 tackles, three pass break-ups and an interception since taking over for the injured Watkins.

“Things happen, you have to move on,” Hartage said about the injury-worn secondary. “Trae (Williams) stepped in. He’s fulfilling the role right now, and we’re looking forward to playing ball.”

Igwebuike helped the young guys grow up fast, but he’s had some assistance from Harris and Watkins on the sideline. Hartage, Williams and Campbell all pointed to the veterans as a continued presence among the cornerbacks, helping them in film study and giving tips during games.

NU will need to leverage all of that collective experience this weekend against a much tougher opponent for the secondary. Duke played its backup quarterback last Saturday and doesn’t have much to brag about at wide receiver. Nebraska, on the other hand, has quarterback Tommy Armstrong, a four-year starter who threw for over 3,000 yards last season.

Armstrong is a versatile dual-threat who also has the luxury of throwing to Jordan Westerkamp, one of the best receivers in the Big Ten who famously victimized the Cats with a game-winning Hail Mary touchdown reception in 2013. Flanking Westerkamp is speedy senior Alonzo Moore. Between the two, the Cats will more than have their hands full.

But — of course — that doesn’t faze the rebuilt Sky Team one bit. Everybody in the secondary seems wholly confident in the defense’s ability to deal with a scrambling Armstrong.

“When (Armstrong is) scrambling he’s looking to throw, so we really have to stay disciplined,” Williams said. “In the secondary we’re pass first, so we have to make sure we’re staying on our guy, locked on, and make sure we’re doing our job.”

The secondary will have to be locked in if NU hopes to win. Armstrong torched Oregon for 200 yards passing and another 95 yards rushing last week in a surprise win over the Ducks. The Cats will fare no better against a similar onslaught.