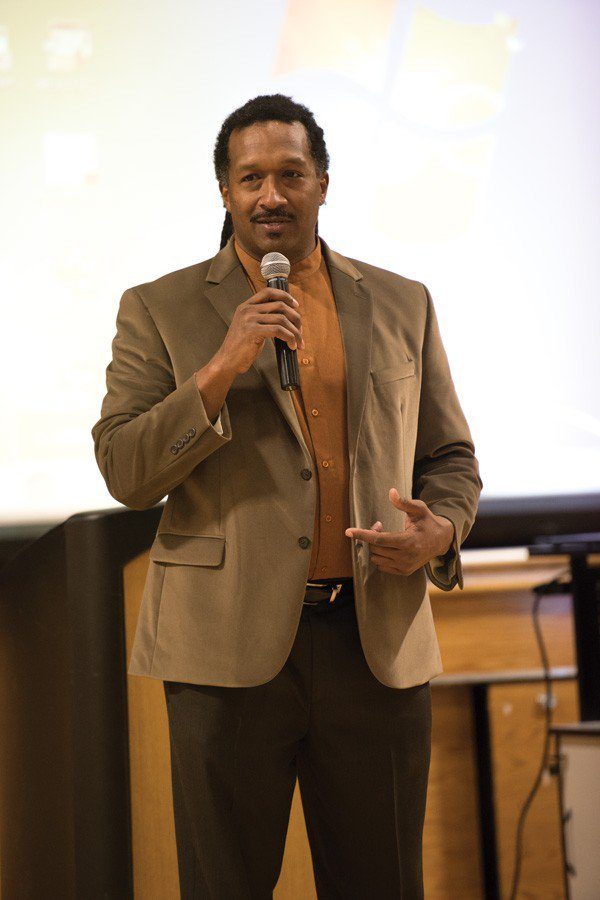 Dr. Gilo Kwesi Cornell Logan speaks at an event earlier this year. Logan was called in by the Evanston Police Department for diversity training.

Logan, a fifth-generation Evanston resident and son of former Evanston police chief Bill Logan, conducted several meetings with Mayor Elizabeth Tisdahl and police chief Richard Eddington, as well as organized workshops and focus groups with more than 90 police officers prior to the meeting on Sept. 6. The workshops focused on identity and stereotypes with the goal of developing and implementing a diversity and inclusion training program for officers to fit the demands of the Evanston community.

“There exists a general misunderstanding, disconnection, mistrust and lack of discourse between the department and member groups within the community,” Logan said. “Officers feel strongly that a stronger relationship with the community needs to be forged.”

Through conversations with community members, Logan found many black people in Evanston feel training is needed to prevent overly-aggressive policing. Community members were also concerned that, by not enforcing EPD officers to live in Evanston, they fail understand the community.

Officers embraced Logan’s feedback, which Eddington said is indicative of Logan’s ability to create a safe environment and his police force. Logan is an Evanston resident, so he was able to work quickly and understand the community’s nuances, Eddington said.

“Bringing in an outside expert who might be good at diversity training or cultural fluency will be extremely hard, if not impossible, for that person to understand the nuances of Evanston during a three-day training,” Eddington said.

Loyola University of Chicago professor Arthur Lurigio, who analyzed Evanston police while a professor at Northwestern, said EPD has a difficult time because of the diverse groups they protect.

“You have the very rich and you have the very poor,” Lurigio said. “Evanston has had a longstanding gang problem and had its challenges with an underground economy driven by drug sales. Evanston has most likely suffered the same challenges that other police departments have in regards to policing people of color.”

Lurigio said the key to fostering and advancing better relations between the police and minorities must come from humanizing the community. Just as soldiers tend to separate themselves from “the other side” in war, police officers are also more like to resort to violence when they fail to communicate with the community, he said.

EPD has asked Logan for an additional proposal, which Eddington said they will add to the 2017 budget.

“I don’t look at this training as a vaccine,” Eddington said. “It’s more like taking vitamins. You have to repeat this. Just because you go through it once doesn’t mean that you are done. Logan was the latest iteration of this effort.”