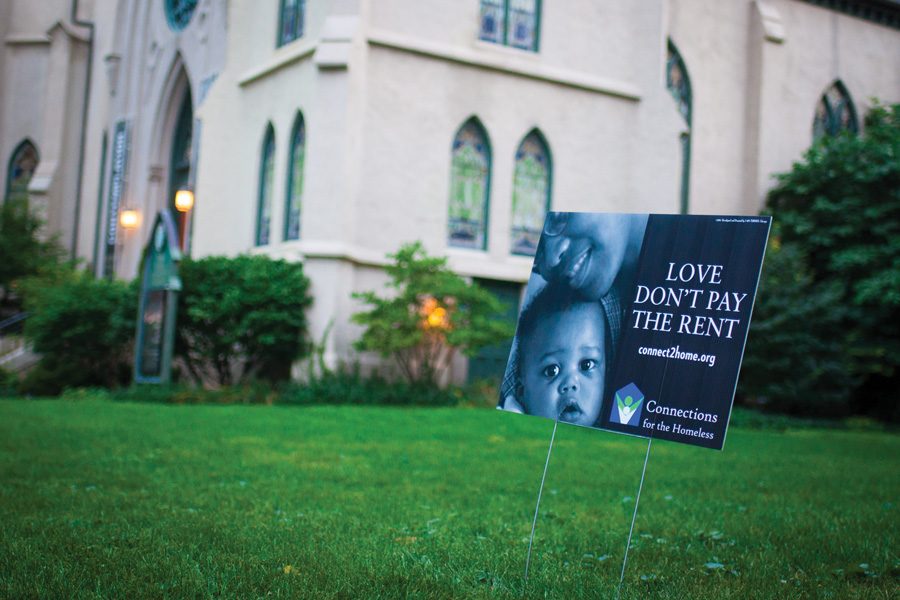 Connections for the Homeless launched an awareness campaign attempting to inform Evanston residents of the city’s homelessness problem. They are hoping to both increase community awareness and raise $500,000.

The time has come to act on Evanston’s homelessness problem, said officials from Connections for the Homeless on Wednesday.

The nonprofit, located at 2121 Dewey Ave., serves North Shore and Evanston residents who are homeless or struggling with home payments. The group has started an awareness campaign designed to inform Evanston residents of the work yet to be done in alleviating homelessness and raise money to expand programming.

Sue Loellbach, director of development for Connections, said, “the math just doesn’t work for anyone trying to live on the North Shore making less than $18 an hour.”

The campaign centers around the theme “love don’t pay the rent” and aims to raise $500,000 to fund a five-day-a-week program for homeless people. The programming currently runs two days a week.

“We love our citizens, but our love is not paying the rent,” Loellbach said at a press conference on Wednesday.

Evanston city manager Wally Bobkiewicz said he and Mayor Elizabeth Tisdahl received a notice about the campaign from Connections last week and said the group was smart to raise the level of awareness in the city.

“Homelessness in Evanston is not as apparent as it is in other communities,” he said.

There are about 4,000 people homeless at some point during any given year in Evanston, said Loellbach, with almost 1,500 on any given night. This includes 272 District 65 students and 178 ETHS students homeless on an average night.

Additionally, nearly 7,500 households in Evanston are at risk of becoming homeless.

Helping to prevent homelessness or helping those who are already homeless will also alleviate other community health problems, Loellbach said, such as mental health issues and hunger.

“More and more, our primary job is to help people survive,” Loellbach said.

Connections is part of Pay Now Illinois, a coalition of more than 90 social services agencies that is suing Gov. Bruce Rauner and his administration for payments on contracts the state had taken out with the social service agencies. During the year-long budget stalemate, many state-supported social services agencies were missing checks from Springfield and were forced to consider cutting programming or staff.

Betty Bogg, the executive director of Connections, said that although they have recently got paid on their Fiscal Year 2016 contracts, some of the damage from the impasse cannot be undone.

Bogg said a small amount of money can make a major difference in whether a person becomes homeless or not.

“If we can give you that as prevention, you may not become homeless,” she said. “We did not get that in FY16, and we were not able to help people with that money.”

Bogg said they wrote the state funding out of their budget for the 2017 fiscal year, although they still have contracts with the state for this year that are not getting paid. Connections received a about $600,000 a year in state funding — a relatively small amount for them — some of which was from the Affordable Care Act and was set to expire.

Despite the state’s financial woes, Loellbach said the time to work toward ending homelessness is now.

“We’re tired of waiting,” she said.