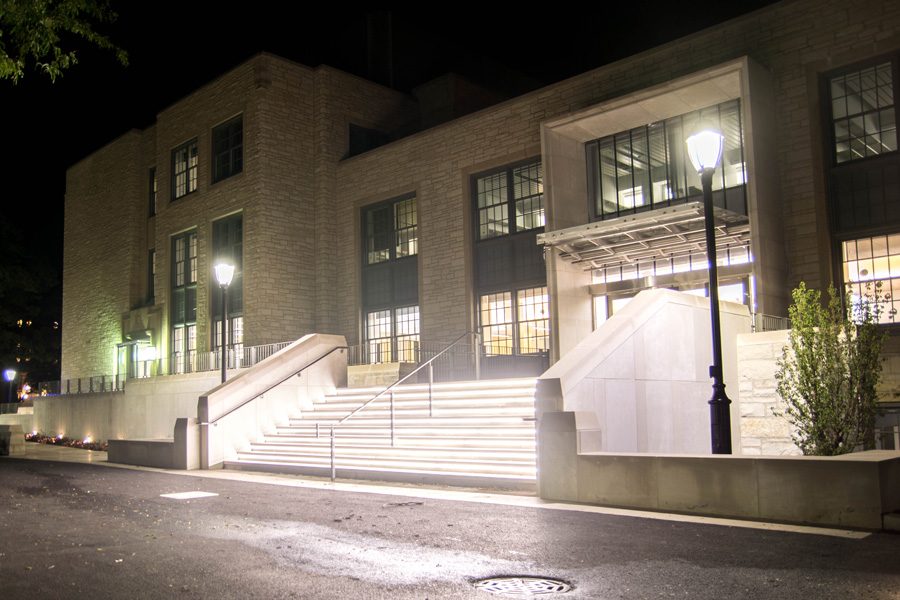 Kresge Hall, which opened in August after renovations, is applying for the Leadership in Energy and Environmental Design platinum certification, the highest ranking a green building can obtain. The Uni

Three weeks into its participation in a national energy saving challenge, the Office of Sustainability reported noticeable progress in its efforts to reduce Northwestern’s carbon footprint.

To supplement its goal of cutting 20 percent of its energy use by 2020, Northwestern started Battle of the Buildings at the beginning of the month. Battle of the Buildings is a 90-day challenge started by Energy Star — a national organization working toward energy efficiency — encouraging participants to save building energy consumption through internal competition.

NU has selected five laboratory facilities — the Catalysis Center, 1801 Maple Ave., the Technological Institute, the Tarry Research and Education Building, and Cook Hall — to compete with one another to save the most energy.

The challenge is a way to engage more people on campus to save energy in simple ways, Office of Sustainability director Kathia Benitez said in an email to The Daily.

“Over the past month we’ve walked through each building and found quick wins that could easily reduce our energy usage with significantly low to no-cost impact to implement,” Benitez said. “Our goal is to be able to demonstrate energy savings from improved air flow … by the end of the competition.”

To reach this goal, laboratory workers are encouraged to close fume hoods — ventilation devices for harmful chemicals — that are not being used and to turn off lights in vacant labs, sustainability communications manager Stephanie Folk said. A single fume hood can use up to as much energy as three single family homes in a year, she said.

The Office of Sustainability is promoting ways to save energy by distributing information throughout buildings and putting reminder labels on equipment, Folk said.

“Since our messaging has circulated throughout campus regarding the competition, we have received tons of positive responses from department chairs excited to learn more about the initiative and are including our conservation tips with our students,” Benitez said.

Participation in Battle of the Buildings will contribute to the University’s efforts to reduce energy usage by 20 percent by 2020 from baseline levels in 2010. It is currently well on track to meeting the goal, having already reduced energy use by 15 percent, Benitez said.

To work toward this goal, NU has invested in replacing fluorescent lamps with LEDs throughout campus and ensuring that current construction projects are as energy efficient as possible, Folk said. Kresge Hall, which opened in August after renovations, is applying for the Leadership in Energy and Environmental Design platinum certification, the highest ranking a green building can obtain. Folk said the Office is “hopeful” that the building meets LEED’s requirements.

“Twenty percent is pretty ambitious, but I think with a lot of the technology that’s coming out it’s something actually not that hard to do,” said Weinberg sophomore Anand Lal-Tabak, Associated Student Government vice president for sustainability. He said he hopes to add a “student component to energy” and get more NU students involved.

The Battle of the Buildings will last until the end of November, and the lab with the most savings will be rewarded for its work.

“We are seeing some interest from the building managers at Tech saying they’re excited about it, they’re behind it,” Folk said. “Just seeing that some of the people who manage these buildings and work in those buildings are getting engaged and … contributing some of their own ideas as well, that’s been great to see.”