University report: Being a black student at Northwestern is ‘exhausting’ 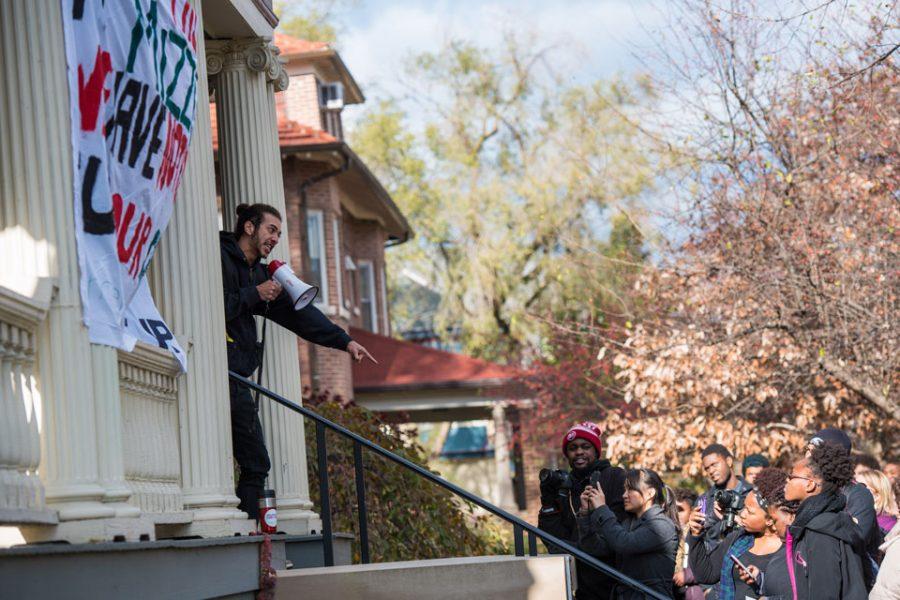 Students gather at the Black House in November 2015 to support students at the University of Missouri and Yale University who protested racial injustice. The NU students later spoke out at the groundbreaking ceremony for the lakeside athletic facility and demanded the University address racial problems on campus. On Monday, the University sent out a report including recommendations to improve the experience of black students at NU.

A landmark report sent out Monday gives a data-rich account of black students at Northwestern feeling dissatisfied, exhausted and alienated on campus.

The 150-page report, compiled by a University task force, includes 14 recommendations to improve the experience of black students at NU. In part, it recommends the University increase the number of black students, faculty and staff, as well as create a research institute to study cultural competency and administer trainings for NU faculty and staff. It also recommends all undergraduate schools at NU create a social inequalities and diversity course requirement focusing on the United States.

In its report, the Black Student Experience Task Force notes the difficulty of describing “a single, all-encompassing” black student experience and recognizes that “intersecting identities must be considered.” But in general, the report explores the ways many black students feel unwelcome and uncomfortable at NU.

In surveys and focus groups, students described microaggressions from both faculty and peers. For first-generation college students especially, students talked about not knowing where to seek help when the academic rigor at Northwestern becomes overwhelming. Students also described loneliness from “being the only one” both in social situations as well as science, technology, engineering and mathematics fields.

Macs Vinson, Associated Student Government executive vice president and a member of the task force, told The Daily that he is more often than not the only black student in his classes.

“It is something that I have come to understand is part of the experience of being in higher education,” the McCormick senior said. “You are the only one.”

The task force, which comprised four students and 11 faculty and staff, was created in November 2015 after protests against University plans to move administrative offices into NU’s Black House and Multicultural Center.

Throughout Winter and Spring quarters, the task force reviewed enrollment data and surveys related to the black student experience. In April, NU faculty and staff facilitated six focus groups at the Black House and the Multicultural Center. Of the 510 black students invited, 63 participated. The task force also sent out a survey to 658 students who either identified as black or both another race and black, and 154 students completed the entire survey.

The task force — chaired by Campus Inclusion and Community executive director Lesley-Ann Brown-Henderson — wrote that to increase the number of black students at NU, the University should improve financial aid packages.

“It is clear that the students who chose not to come to Northwestern go to other universities because of the financial aid packages they are offered,” the report says. “Many of these students are middle class, and our financial aid structure does not provide them a financial package that is competitive with our peer institutions.”

In focus group discussions quoted in the report, black students describe feeling uncomfortable, isolated or neglected by campus institutions. For example, Wildcat Welcome is a difficult, awkward week for many black students, the report says. One student reported he was the only black student in his Peer Adviser group.

“When the kids were talking to me, sometimes it was obvious that they didn’t interact with Black people ever in their lives,” he told a focus group. “Every time our PA group had a discussion on the kind of people that we were or where we came from … I felt the least welcome because no one was like me.”

The task force recommended the University review Wildcat Welcome to find ways to make it “more inclusive and welcoming” for black students.

The report also says many black students feel excluded — “or even shunned” — by NU’s Greek community. The task force notes that the University’s most populous Greek councils are predominantly white: According to data from this past spring, only 54 of the 2,628 students who participated in Interfraternity Council or Panhellenic Association were black.

Black students reported being ignored at fraternity parties. One said she wasn’t admitted to parties because of her race.

“A lot of my friends would say, ‘Oh, let’s go to this frat party tonight,’” one student said during a focus group. “None of them (my friends) are Black. I remember going to my first one. It was very uncomfortable for me. I looked around. Of course, I was different. I wasn’t accepted. I felt extremely uncomfortable.”

The task force recommended the University challenge members of Greek organizations and their leaders to “examine the culture of their community and explore ways to ensure they are more welcoming and inclusive.”

Vinson said he hopes the recommendations improve the relationship between University leaders and black students.

“We go to school at Northwestern, but it’s so much more than that,” he told The Daily. “We live here, we eat here, our social lives revolve around this campus, and so I think that’s important — that the people who are making these decisions are really cognizant of what’s affecting us.”