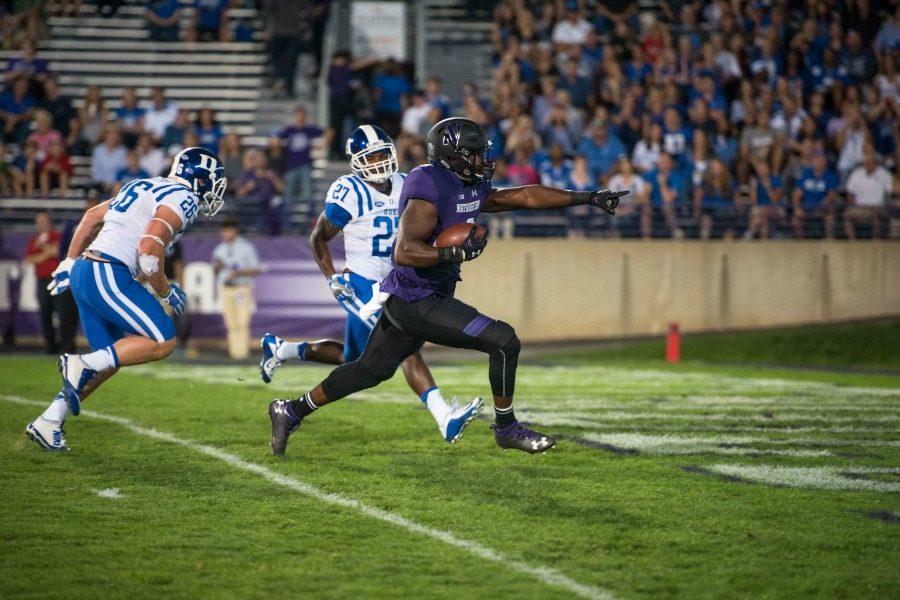 Garrett Dickerson punches in Northwestern’s first touchdown of the game. The Wildcats would go on to score two more long touchdowns en route to their first win of the season.

After a pair of nail-biting losses, Northwestern let its fans breath easy in the final minutes of its 24-13 win over Duke on Saturday night.

A big passing day from sophomore quarterback Clayton Thorson and a stingy defensive performance allowed the Wildcats (1-2) to best the Blue Devils (1-2, 0-1 ACC). NU prevented Duke from putting a damper on a celebration of the new students, who raced onto the field pre-game as part of the “Wildcat Dash” orientation festivities.

For the second straight week, the Cats threw the ball frequently. Thorson approached the career-high 41 passing attempts he finished with against Illinois State, airing it out 39 times. He completed just 18 of those attempts, but finished with a career-high 320 passing yards and a trio of touchdowns.

Thorson found himself fighting against an aggressive Duke pass rush all night.

“I thought (Thorson) hung in pretty well with the amount of heat that we got,” coach Pat Fitzgerald said after the game. “I think (Duke) threw every blitz ever known to man at us.”

The signal caller’s first touchdown came from a 26-yard completion to junior superback Garrett Dickerson, which put the finishing touches on a balanced, 10-play, 75-yard opening drive for NU.

“It was a nice play by Garrett against man coverage,” Thorson said. “It was Garrett’s first touchdown catch … that was fun for us.”

It was the only score of the first half for the Cats but set the tone for the evening, and NU would never trail. But Duke drew even with a 99-yard drive late in the second quarter.

With the score still locked at seven 10 minutes into the second half, the Cats were gifted an opportunity after a botched Duke punt gave them the ball at their opponent’s 44-yard line. Just one play later, NU took the lead, as Thorson dropped the ball into the hands of an open Solomon Vault, who rolled into the endzone to open up a 14-7 NU lead.

Thorson put the game on ice in the fourth quarter with a 58-yard third-down touchdown pass to Austin Carr. The touchdown, and a 40-yard third quarter Jack Mitchell field goal, allowed NU to finish with its highest point total of the season.

NU’s defense was again a bright spot in the win, holding Duke to 5-for-17 on third downs and turning the Blue Devils over twice.

“We ran that play in practice … Ran that exact play,” Igwebuike said. “Didn’t intercept it in practice.”

Igwebuike tweeted “Thanks for the int,” before the game, portending the pick. He said the tweet was inspired by a conversation with God.

“If I don’t get an interception, I’m going to get cheesed — everybody’s going to make fun of me,” he said.

Following the game, Fitzgerald revealed Walker has been fighting a knee injury since early this year and is just now getting back into “game shape.”

With the win, the Cats bounced back from what has been a rough start and gave new students something to celebrate. Fitzgerald said he hopes for another strong student turnout when the NU hosts Nebraska in its Big Ten opener next week.

“I know there will be no midterms next week, so I expect them to be here very early and ready to rock,” he said.