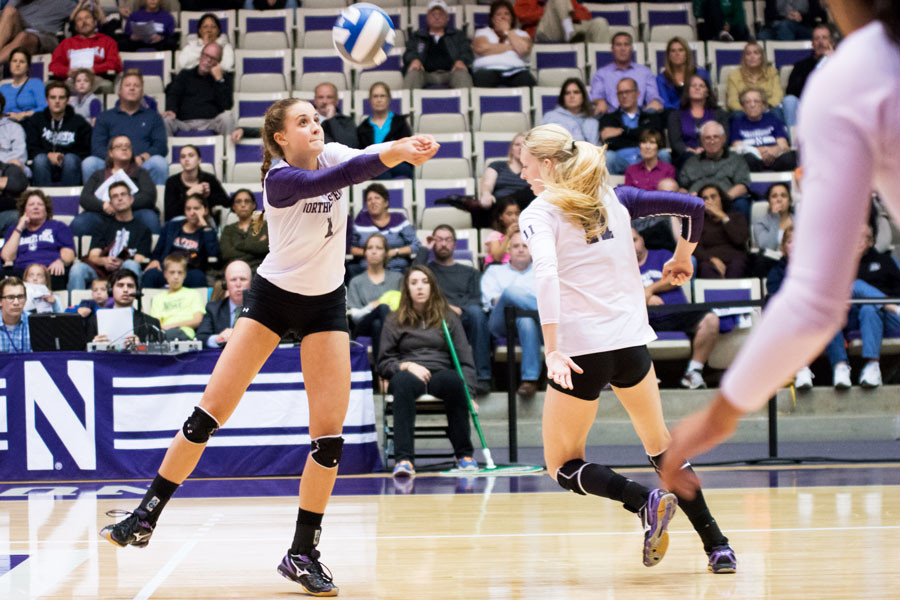 Taylor Tashima passes the ball. The junior setter had a big game in Northwestern's Saturday loss against Dayton.

The second weekend of coach Shane Davis’ tenure at Northwestern didn’t go as smoothly as the first.

After sweeping three matches in their opening weekend of the season, the Wildcats (4-2) lost two of three matches at the Dayton Invitational.

The toughest matchup of the weekend came Saturday against the hosting Dayton (7-0). NU hung in the match before getting edged 15-11 in the fifth set to fall 3-2. The Cats held up well defensively, holding the Flyers to a .180 hitting percentage, but only hit .200 themselves after sitting at second in the country with a .380 hitting percentage coming into the weekend.

After a long match, NU didn’t have much left in the tank against Xavier (3-3) later that day, losing in three sets to the Musketeers. The Cats hit just .146 as a team to drop the second game of Saturday’s double-header.

There were also some positive moments during the invitational, as NU opened their weekend with a dominating performance on Friday against Tennessee-Chattanooga (5-2) in a 3-0 victory. The Cats won the first set 25-11 and didn’t look back from there against the Mocs.

Junior outside hitter Symone Abbott was NU’s most prolific hitter on the weekend, leading the way in kills for the Cats in each of the three games to continue a strong start to the season. Meanwhile, junior setter Taylor Tashima shined with 46 assists and 12 digs against Dayton to give NU a chance to win the match.

The Cats are slated to play three more games next weekend at the Lipscomb Invitational.