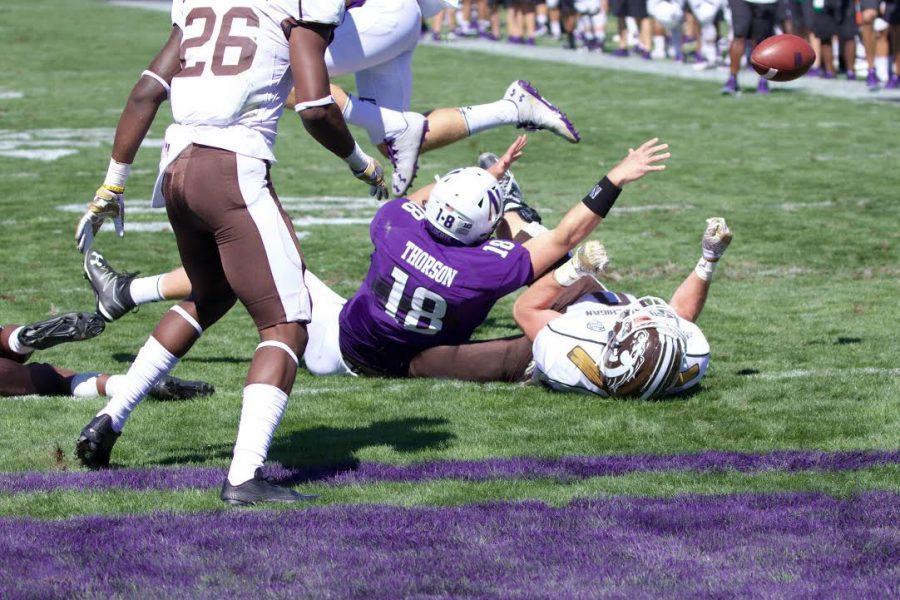 Clayton Thorson loses the ball on the one-yard line late in the fourth quarter Saturday. The sophomore quarterback had been trying to score on a first-and-goal from the six, but ultimately fell just short.

Late in the fourth quarter, Clayton Thorson tucked the ball under his right arm and raced toward the goal line as a Western Michigan linebacker swung his arm at the sophomore quarterback’s shoulder. The linebacker, junior Robert Spillane, connected and the ball popped out, tumbling into the end zone while Thorson helplessly watched the Broncos recover the fumble.

Western Michigan sealed a 22-21 victory over the Wildcats (0-1) on Saturday as Northwestern’s defense, which struggled all afternoon, was unable to stop the Broncos (1-0) from running out the clock. NU’s chance to take the lead, and win the game, slipped away.

The Thorson turnover, recovered in the end zone by redshirt-freshman Bronco Davontae Ginwright, was the difference in the game. It was the only giveaway by either team all afternoon.

“I came around the edge and saw a lot of space,” Thorson explained, but the Western Michigan defender hit from the side. “I’ve got to hold onto the ball. Can’t fumble on the one yard line.”

Coach Pat Fitzgerald echoed the sentiment. Despite a lengthy and controversial replay of the fumble recovery, Fitzgerald put the onus on his players.

“We can’t fumble the ball. We take pride in our ball security,” Fitzgerald said. But the coach also noted the importance of NU’s defense forcing mistakes on the other side of the ball. “We can’t go through a game, with the amount of experience we have back on defense, without a turnover.”

A turnover or two would have been big for a defense that was on the field for more than 39 minutes on Saturday. The Cats surrendered 416 yards of offense to Western Michigan, and the Broncos were able to control possession thanks to seven third-down conversions and four fourth-down conversions.

Together, the failure to force turnovers and the inability to get stops on third and fourth downs made for a long day for NU’s defense.

“Any defense can’t stay out on the field that long,” Fitzgerald said.

The time of possession imbalance was also partially a product of offensive struggles for NU. Junior running back Justin Jackson lit up the box score, picking up 124 rushing yards, 47 receiving yards and a career-high three touchdowns. But flashes of brilliance from Jackson were not enough for an offense that needed to consistently put together lengthy drives to rest an overworked defense.

NU opened the day with a drive that seemed to put the team on a pathway for success, going 75 yards on 15 plays and utilizing a mix of plays to take a 7-0 lead. But it would prove to be NU’s only score of the half, as the Cats’ next two drives were short, ending in punts.

Western Michigan set the tone for the rest of the game with a drive lasting 10:08 that sucked up most of the second quarter and ended in a field goal. It was one of four scoring drives for Western Michigan that lasted 10-plus plays. NU’s only such possession was its opening drive.

Although the contest was one-sided in terms of possession, it was back-and-forth on the scoreboard, and NU had a chance in the final minutes to punch in the final score. After a Western Michigan touchdown with 5:38 left on the clock, the Cats’ offense went to work. Thorson, who finished the game with 15 completions for 196 yards, pushed NU down the field with strikes to senior Austin Carr and junior Garrett Dickerson, and a 12-yard Jackson run moved the ball to the six-yard line.

Then Thorson lost the ball.

“Turnover: 1-0. Difference in the game,” Fitzgerald said. “One point. End of story.”