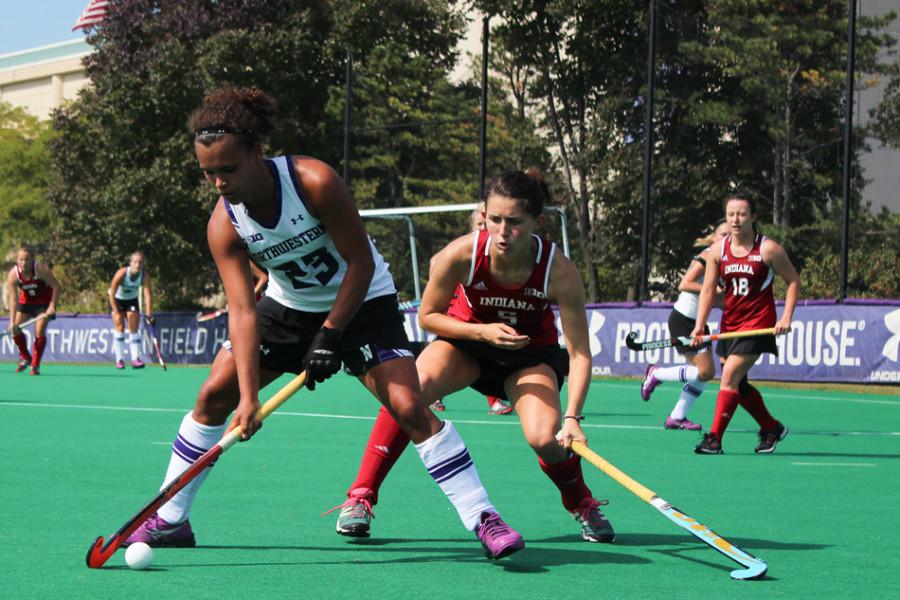 Isabel Flens holds off a defender. The senior midfielder scored twice in Northwestern's 5-0 win over Massachusetts on Sunday.

Northwestern began its season on an uneven note, falling 2-1 to Boston University on Friday but rebounding with a 5-0 win over Masachussetts on Sunday at the Wildcat Classic in Durham, New Hampshire.

The No. 16 Wildcats (1-1) played well against the No. 17 Terriers (2-0) in the season opener, but failed to take advantage of a 14-6 edge in total shots and five penalty corners to just two for Boston. The Terriers scored on either side of halftime, and though senior midfielder Dominique Masters cut NU’s deficit to 1 with just under 15 minutes to play, the Cats could not find an equalizing goal. Boston goaltender Cammy Jensen played a significant role in slowing NU, making nine saves on 10 shots on goal.

The Cats made good use of their opportunities on Sunday, rolling through the Minutemen despite outshooting Massachusetts (0-2) just 13-12 and conceding eight second-half corners. Senior midfielder Isabel Flens led the way with 2 goals, and Masters added a goal and an assist of her own. Freshman midfielder Lily Katzman and junior midfielder Elena Curley each scored their first career goal for NU, which scored three times in the opening 16 minutes to take a early commanding lead.

The weekend offered coach Tracey Fuchs a first look at her team in game action without 10 graduated seniors, including second-team All-American back Lisa McCarthy and second-team All-Big Ten midfielder Charlotte Martin. Three players, including Curley, a transfer from Ohio University, made their first NU starts, and four others made their debuts. As expected, Flens and Masters were the focal points of the offense.

The Cats next travel to Lancaster, Pennsylvania, for games against No. 8 Boston College (1-0) and No. 4 Duke (2-0). NU split games against that duo last year, also in Lancaster.