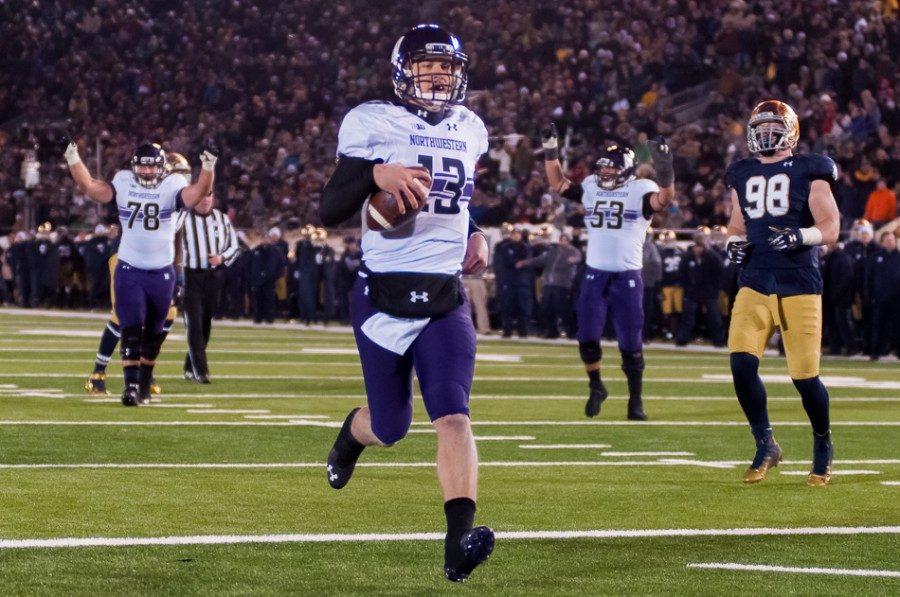 Trevor Siemian runs for a touchdown in Northwestern’s 43-40 win over Notre Dame in 2014. The ex-Wildcat will take over for the now-retired Peyton Manning as starting quarterback for the Denver Broncos.

Siemian will start Denver’s season opener against the Carolina Panthers on Sept. 8 in a championship rematch. He won the job over veteran Mark Sanchez and rookie Paxton Lynch.

By most accounts, Siemian’s rise to starter was improbable. The ex-Wildcat QB was one of just seven quarterbacks selected in the 2015 NFL Draft, when the Broncos took him in the seventh round. Following the retirement of Peyton Manning and the departure of Brock Osweiler via free agency, Denver had been searching for a quarterback to start the 2016 season.

It remains to be seen how long Siemian’s leash will be. He has only one snap of NFL experience under his belt — a kneel-down to close out the first half in Denver’s Dec. 20 loss to the Pittsburgh Steelers.

For now, Siemian will lead an offense headlined by wide receiver Demaryius Thomas and running back C.J. Anderson. The Broncos’ offense was middle-of-the-pack last season, finishing 16th in the NFL with 355.5 yards per game.

As a Wildcat, Siemian threw for 5,931 yards, the fourth-most in NU history, in addition to 27 touchdowns and 24 interceptions. Siemian played in all three preseason games, starting two of them, and completed 27-of-43 passes in that span for 285 yards, one touchdown and two interceptions.

Sanchez began his career with the New York Jets in 2009 and spent the last few seasons as a backup on the Philadelphia Eagles. Denver traded for him in March.

Lynch passed for 8,865 yards over three seasons at Memphis, tossing 59 touchdowns against 23 interceptions. The Broncos selected him with the 26th overall pick in the 2016 NFL Draft.