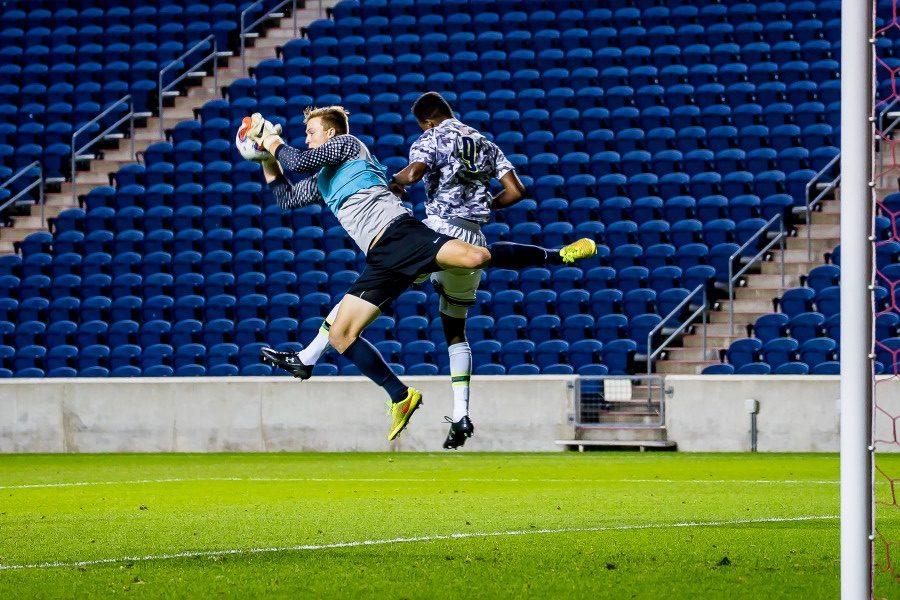 Elo Ozumba challenges the goalie for the ball. The junior forward had two shots on goal and helped Northwestern to a 2-1 victory in its season-opening game against Florida Gulf Coast.

For Northwestern, it’s good to be home.

After playing the majority of their home games in Bridgeview, Illinois, last season, the Wildcats (1-0-0) opened their 2016 season in the renovated Martin Stadium on Friday and marked the occasion with a 2-1 victory over Florida Gulf Coast (0-1-0).

Senior midfielder Brandon Medina scored the first goal of the season for NU off a penalty kick in the 22nd minute to give the Cats an early 1-0 lead. He added another goal from the spot in the 47th minute, notching a brace in his first appearance after missing all of 2015 with injury.

The Eagles threatened throughout the game, getting off 23 shots to NU’s eight. Junior goalkeeper Francisco Tomasino had four saves for the Cats, doing enough to maintain the lead.

Florida Gulf Coast got on the board in the 72nd minute with a penalty kick goal from forward Albert Ruiz, but NU held off the Eagles from there to secure the opening-day victory.

The Cats return to action at home Monday against Santa Clara.