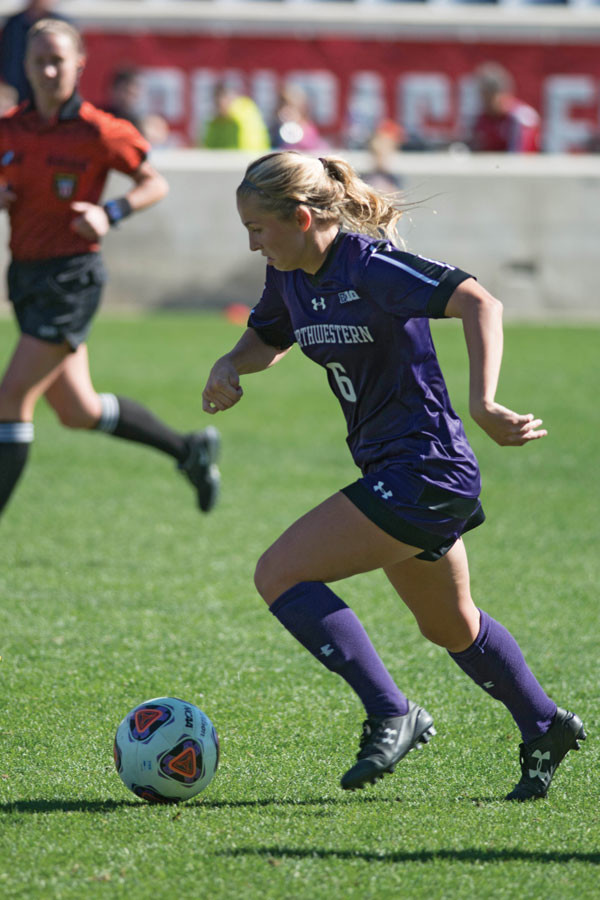 Kassidy Gorman moves forward with the ball. The junior defender scored the game-winning goal for the Wildcats over DePaul, giving Northwestern three wins in as many games.

NU’s defense conceded it’s first goal of the year early on, with a 4th-minute tally from Blue Demons forward Kelli Hubly forcing the Cats to play from behind for the first time all season.

But NU was up to the task, coming on strong late in the second half to come back for the win. For the third straight game, junior forward Michelle Manning, the expected leader of the Cats’ attack, was missing from the lineup, but the play of two other forwards ensured that NU would have enough offense to get back into the game.

Sophomore forward Brenna Lovera got the start and continued her great form to start the season, notching three shots on target. She slotted home a goal that pulled the Cats level with DePaul in the 78th-minute, her third of the young season.

Meanwhile, junior forward Maria Fayeulle was a key facilitator off the bench for NU. She was credited with the assist on Lovera’s goal, and she also set up Gorman on the left side of the box for a second assist on Gorman’s game-winning goal in the 86th minute.

The Cats now have 6 goals on the season in three games, all coming after the halftime break. NU’s depth could be the key to its ability to surge late in games, as seven different players saw time off the bench for the Cats compared to three for the Blue Demons.

NU will look to stay unbeaten as it returns to the road Sunday to take on Kentucky.