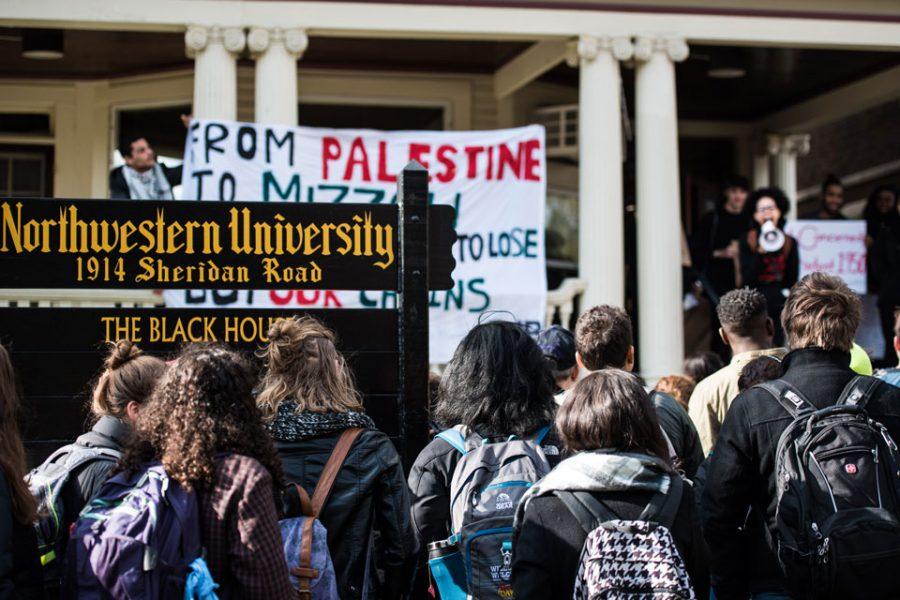 Students gather outside the Black House last November to protest institutional racism and proposed changes to the facility. Conversation about safe spaces on college campuses was drawn back into the spotlight when the University of Chicago dean of students told new students in a letter that the administration does not support them.

University President Morton Schapiro wrote in a Los Angeles Times op-ed published Thursday that protests on college campuses are a sign of progress toward diversity and inclusion.

The article adds to public commentary from college administrators on students’ demands to change their learning environments — from protesting institutional racism to requesting trigger warnings and safe spaces. The day before the op-ed was published, a letter from the University of Chicago’s dean of students drew attention for telling incoming students that the University does not support safe spaces and trigger warnings. Northwestern University spokesman Al Cubbage told The Daily that Schapiro did not wish to comment on the UChicago letter directly.

In his letter to the UChicago class of 2020, dean of students John Ellison discussed the meaning behind what he sees as the school’s “commitment to academic freedom.”

“We do not support so-called ‘trigger warnings,’ we do not cancel invited speakers because their topics might prove controversial, and we do not condone the creation of intellectual ‘safe spaces’ where individuals can retreat from ideas and perspectives at odds with their own,” the letter said.

Communication senior Xiomara Contreras, co-coordinator of moderators at NU’s Sustained Dialogue, said the UChicago letter made it seem as though the University was dismissing students who feel marginalized, despite its focus on creating a diverse student body.

“When you want to recruit students that come from different identities, I think you should make them feel included, and that includes making sure they feel comfortable in the space they’re in,” Contreras said.

In a Washington Post op-ed published in January, Schapiro confronted the issues of trigger warnings and safe spaces, writing that “the best hope of creating an inclusive community is to first create spaces where members of each group feel safe.”

Schapiro’s most recent article, which he co-wrote with Lewis and Clark President Barry Glassner, called college campuses an “ambitious experiment in diverse populations living together” and recognized that students will make different choices in responding to that sort of environment.

Although Schapiro and Glassner wrote that they prefer students work with administrators toward change instead of occupying offices or segregating themselves from students they disagree with, they said they realize today’s college students live “in a time of political, social and economic turbulence,” citing the rhetoric of the 2016 presidential election as an example.

They wrote about their disapproval of elite voices who base their criticism on incidents that are “unrepresentative” of the reality on college campuses.

“For every student who complained about inauthentic ethnic food in the cafeteria, to cite one well-publicized example, exponentially more Asian and Asian American students endured insults and snubs based on jealousy, stereotypes or outright hatred,” Schapiro and Glassner wrote. “Likewise, for every example of students demanding safe places or trigger warnings so as to avoid material they consider offensive or upsetting, innumerable LGBT students and students of color found themselves in situations where they were affronted or physically threatened.”

Discussions about safe spaces and trigger warnings at NU drew attention last year when Communication Prof. Laura Kipnis drew criticism from students after publishing an article in The Chronicle of Higher Education in which she wrote that many students are “cocooned from uncomfortable feelings,” recalling instances in which two students requested to not view assigned films because they would be mentally or emotionally triggering.

Later that year, University officials announced plans to move administrative offices into the Black House and the Multicultural Center, sparking outrage among students and alumni who said these changes would alter spaces many students went to for comfort and community.

In November, several NU students disrupted the groundbreaking of the lakeside athletic facility being built on campus, protesting institutional racism and the proposed changes to both buildings. The protest resulted in the cancellation of all plans to move offices into the Black House and the MCC. Two weeks later, students wrote to Schapiro demanding changes to University curricula, demographics and buildings to make the campus more inclusive for minorities.

In May, the Black House Facility Review Committee submitted a report to the Office of Student Affairs with recommendations about upgrading the building and restructuring its programming. The report is set to be reviewed by Patricia Telles-Irvin, vice president for student affairs, with a final decision to be made this summer.

Glassner and Schapiro wrote that “no one should be surprised” by the protests held on college campuses last year, as many universities have become much more diverse while most Americans outside of academia continue to live and work with people who are very similar to themselves. Diversity and inclusion is not easy, they wrote, but students’ college years are an opportunity for people of different backgrounds to coexist.

“While on campus, a daughter of a hedge fund parent may share a room with the daughter of a migrant worker; a straight Republican may room with a gay Bernie Sanders supporter,” Schapiro and Glassner wrote. “Everyone is here, and everyone lives together, if not in perfect harmony.”

Associated Student Government president Christina Cilento said she believes students can learn about each other in a respectful way and broaden their minds while still having safe spaces on campus. The UChicago letter “missed the mark,” she said.

Cilento, who walked out of a dinner at Schapiro’s home in April to protest NU’s investment choices, said she hopes more conversations about safe spaces will take place at NU in the upcoming year.

“It’s encouraging to see that President Schapiro is thinking about safe spaces and understands the reasons why students protest conditions on college campuses,” Cilento said.