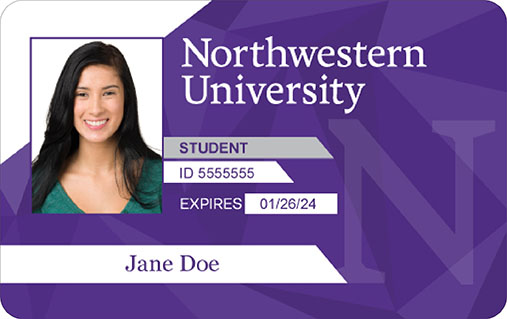 A picture of the new Wildcard, which features a new design and “smart card” technology. The card, which administrators say will make Northwestern more secure, will replace conventional dorm keys in four to five years.

Students will be able to enter some dorms this fall using a redesigned Wildcard, one which University administrators say reflects Northwestern’s new visual identity and marks a shift away from conventional security.

The cards, equipped with computer chips that grant access to “secured campus facilities,” will be issued to all new students, faculty and staff beginning Aug. 1, associate provost for academic initiatives Jake Julia said. He added the Wildcard was long overdue for a redesign and that the inclusion of “smart card” technology “unequivocally” symbolized a new means of access on campus.

“For most folks — faculty, staff and students — to carry their Wildcards with them for parking or the library is just a service function,” he said. “Having one card that would do all that versus having different keys would just make life easier.”

Over the past 18 months, executive director of Residential Services Paul Riel said University officials had constructed a plan to replace dorm keys with the new “smart cards.”

In the fall, four residential buildings — Allison Hall, Shepard Residential College, 1838 Chicago and Goodrich House — will take advantage of the new “access control” system. Residents of the four dorms will use their Wildcards to enter both public spaces and private rooms, a change Riel said would make the campus more secure.

“If someone loses a card we’re able to quickly disable it and prevent someone else from accessing a different space or room,” he said. “You just have a lot more access control when you move to a higher technology.”

In addition, students who live in any of the newly renovated South Campus dorms will be able to use their Wildcards to move “seamlessly” through each building. Previously, key swabs only allowed entrance into a student’s own living space.

“The current model is if you don’t live in a building, you don’t have access,” Riel said. “All of this solves that — it allows us to control who has access to spaces when and provides a lot more opportunities for seamless programming.”

Riel said over the next four to five years he hoped to eliminate all physical keys in dorms and replace them with the new “smart cards.”

Plans for the Wildcard redesign began last year, when Julia said a group of representatives from the Wildcard Office, Student Affairs and Global Marketing was formed to gather input from the community.

Current community members without “smart cards” — cards equipped with computer chips — can upgrade their Wildcards at no cost beginning Nov. 1. Those who already have computer chips in their Wildcats will have to pay a $25 upgrade fee or wait until their current Wildcard expires to get a new “smart card.”

“Technology has accelerated in the last five or 10 years related to access control,” Riel said. “The lock-and-key systems that we currently have are difficult to maintain and expensive. … We are moving toward a card-access system.”