Charles Dawes biography, set to release in August, will use information from Evanston Archivist’s basement archive 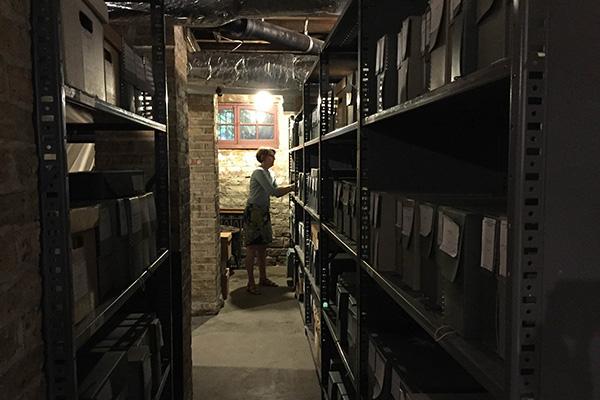 Lori Osborne searches through files of historical records in the basement of Evanston’s Charles Gates Dawes House. She has worked as the Evanston History Center archivist for 10 years.

Lori Osborne carefully climbs down a steep flight of stairs into a dim expanse. She inhales, the musky air mingling with rotting paper and dust-covered furniture. To her, the scent is warm and familiar.

Osborne’s office is located in the basement of Evanston’s historic Charles Gates Dawes House, in the space once used by former vice president Charles Dawes’ maids and butlers as a storage and work room. There, Osborne has created a haphazard home for herself, working by lamplight to find the stories that hide in the piles of documents, photos and books surrounding her.

Osborne, 56, works as the Evanston History Center archivist. She can be found in the Dawes House basement three times a week, digging through the expanses of pale green filing cabinets that line the basement’s walls in search of various odds and ends that make up Evanston’s past.

“We get records and things from everywhere,” Osborne said. “My job is to put them all in boxes, and know them.”

Osborne manages approximately 3,500 documents in the Center’s research room, which she said range from genealogies of Evanston’s founding families to telephone directories from 1926. Her work varies; she may find the missing link to a family tree in a lost passport, or simply verify that one of Evanston’s 61 registered historic homes once had a porch, she said.

“I just find this stuff fascinating,” Osborne said, examining a 20th-century architecture and fire safety record from her archive. “It tells the town’s story.”

To her colleague Kris Hartzell, Osborne is an exemplary historian.

“She’s very energetic, very focused,” said Kris Hartzell, the center’s director of facilities, visitor services, and collections. “It’s the archivist in her, wanting to classify and delegate and make sense of it all, give it meaning.”

For over a decade, Osborne has enjoyed what she calls “organizing history.”

After earning her Master of Arts in Public History from Loyola University in 2004, she worked as the project archivist at Northwestern University until 2005. Osborne said the following year, her passion for Evanston’s history led her to join the staff at the Evanston History Center and launch the Evanston Women’s History Project.

“I’m always collecting information, so people will realize how significant the contribution of women was to the creation of Evanston,” she said.

Osborne has pieced together much of the center’s information on Frances Willard, who became the president of the Woman’s Christian Temperance Union in 1879.

Osborne said archiving the documents that fill her basement office means an opportunity to uncover the stories of Evanston residents — both male and female — that time has lost.

“Things in an archive can pile up.” she said. “Paper multiplies and it takes digging to find the stories. But collecting stories is priority to me.”

An earlier version of this article misstated what the basement was used for by Dawes’ maids and butlers. It was used as a storage and work room, not for lunch. The Daily regrets this error.

An earlier version of this article’s headline was unclear about the role the archivist played in the biography. Osborne herself did not contribute significantly to the research for the biography.

Taylor Plett is a rising high school senior participating this summer in the Medill-Northwestern Journalism Institute.