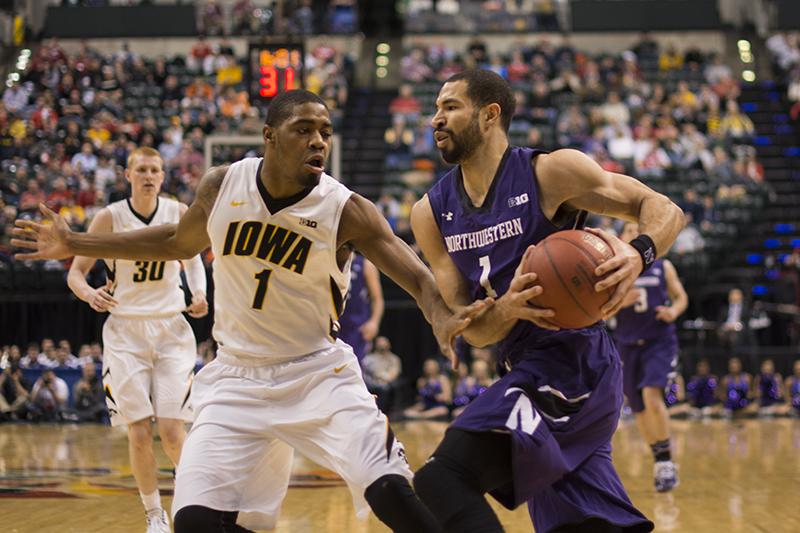 Former Wildcat guard Drew Crawford attacks the paint in a 2014 game. Crawford is one of three Northwestern alumni slated to play in The Basketball Tournament for a team put together by former Cats Tim Doyle and Craig Moore. (Daily file photo by Brian Lee)

Former Wildcat guard Drew Crawford attacks the paint in a 2014 game. Crawford is one of three Northwestern alumni slated to play in The Basketball Tournament for a team put together by former Cats Tim Doyle and Craig Moore.

Despite setting a program record in wins last season, Northwestern has yet to make an appearance in the NCAA Tournament, the only major-conference school with that dubious distinction.

But this summer, several former Wildcats will get another chance at tournament glory when three NU alumni — Michael “Juice” Thompson, Drew Crawford and Craig Moore — travel to St. Xavier in Chicago to compete in The Basketball Tournament.

TBT started in 2014 as a 32-team tournament with a $500,000 championship prize. Since its conception, it has expanded to 64 teams, partnered with ESPN and now boasts a $2 million reward. The five-on-five tournament is open to anyone who is over 18 years old and it attracts NBA, college and international talents. The tournament starts on July 9 in Los Angeles and will culminate in a nationally-televised championship game held in New York on August 2.

A team of their own

Moore and former NU guard Tim Doyle headed the project of trying to create a majority-Cats team to compete in this year’s tournament. The two played together for two years at NU, before Doyle graduated in 2007 and Moore in 2009. Moore said Doyle asked him over lunch in Chicago to help him put together a team.

“He had a couple contacts that would help and I’m close with some of the younger guys that I played with and Tim didn’t,” Moore said. “I told him I would reach out to those guys and see if there is any interest … Once we got that going, Tim went through his contacts to kind of help us get started. It came together from there.”

Doyle, who was formerly the general manager of the team, will no longer be playing with the team because of limited roster space and will be a booster for the squad. He has been following TBT since it began and had a friend play on a team of Notre Dame alumni that won the whole tournament in 2014.

The former guard said he has played in close to 30 different tournaments since he graduated from NU, and said TBT was a perfect opportunity to reunite his former teammates.

“It was one of those things where you were like ‘half a million dollars, what is going on here?’” Doyle said. “You really didn’t know what was for real and what wasn’t. Then last year with the television exposure of ESPN and between being nationally televised and the prize money being $1 million, I thought to myself ‘it would be really fun if we could get a former group of Northwestern guys back together.’”

Doyle remained close with the Cats, calling games for both the Big Ten Network and WGN. He maintained his connections with older and younger players alike and started reaching out to them to gauge interest in forming a team. Doyle specifically had a close relationship with Thompson — who had already played in the tournament before with Moore — and he had gotten to know Crawford and former star forward John Shurna.

Thompson, Crawford and Shurna all agreed to join Doyle and Moore in playing in the tournament, establishing the NU nucleus of players for Doyle’s team.

“Once I had the foundation of Northwestern guys, I knew other guys would want to play with us,” Doyle said. “Once we had the foundation then it was a matter of just putting the ball in motion, and now I think we have as good a chance as any team in the tournament to win the whole thing.”

Despite Doyle locking down his core, he was concerned about the NBA Summer League conflicting with the schedule.

After Thompson led France’s top professional league in scoring, Crawford finished his season in Israel as one of the league’s top-10 scorers and Shurna recorded a stellar season with Valencia, Doyle was worried some of his teammates would receive offers to play for NBA teams in the summer. The Las Vegas Summer League stretches from July 8-18 and the playoffs will intertwine with the opening round of TBT.

Following the NBA Draft, Crawford told The Daily he would be playing with the Toronto Raptors in the summer, which could force him to miss the first round of TBT. Additionally, Shurna fractured his right arm in early June while playing for Valencia and will miss the entire tournament.

“My focus is definitely on summer league because that’s the big thing to advance the career, to keep moving forward in my career,” Crawford said. “TBT is just a chance to have fun, a chance to get out and compete. It’s a cool tournament because it’s taking basketball back to basics.”

Doyle knew that his team could be playing short-handed in the first round, so he had to extend invitations beyond just the Cats community. Doyle recruited former Purdue star forward and NBA journeyman Robbie Hummel to join the team, along with several other players who could fit the team’s offensive scheme.

120 Sports — named for the media company Doyle works for — will have seven players who did not play at NU, including former NBA D-League guard Nate Brown, former Creighton guard Grant Gibbs and players from Georgetown, Yale and Fordham.

Brown, who played for St. Peter’s and the Austin Spurs, currently plays with Moore for the New York Athletic Club and has run similar offenses to those that his Cats teammates ran at NU. He considers himself a pass-first point guard who values making good decisions with the ball, and said he is not worried about meshing with the rest of the team.

“If you bring together guys with a common goal and not necessarily guys having individual goals, it makes the process easier,” Brown said. “We have unselfish guys, guys obviously with a high IQ that can play. We can adjust. We’ll have some bumps in the road but hopefully those are small and we can get through them as quick as possible because one loss and you’re done.”

Along with Brown, Doyle and Moore decided to reach out to Gibbs, whom they had seen play at Creighton. Gibbs hasn’t played with any of the NU players on the team, but after failing to create an entirely Creighton team, he decided to join the Cats.

Gibbs classified himself as a high-IQ player, who could adapt to the team. He said he is willing to fill any role the team requires.

“I’m a facilitator, I can score some when called upon,” Gibbs said. “As far as my fit with this team, just being able to play multiple positions, being versatile. Obviously this team has some really good scorers, so I’m just filling in the gaps, and doing whatever is asked of me.”

Both Moore and Doyle decided the team would run the Princeton offense — an offensive style that is based around cutting and shooting — which the players learned while playing under former Cats coach Bill Carmody.

“That’s what Tim’s goal was when putting the team together,” Shurna said. “It’s such an intellectual offense when you’re just reading one another, and Tim put together guys that are really smart basketball players and read the game well.”

Moore said most of the players on the team have run some form of the Princeton offense or could adapt quickly enough to fit the system. The team focused on creating a group of players who could play cohesively together.

Doyle said the Princeton offense, which relies heavily on off-ball screens to free shooters and cutters, wouldn’t be difficult to implement since a majority of the team has some experience with it.

Thompson said the team is at an advantage since other teams don’t have the time to scout offensive sets. He also said the team might even consider bringing back the 1-3-1 defense that Carmody installed while he was with the program.

But Thompson said for the system to work, the team’s chemistry must be exceptional.

Thompson, Crawford and Shurna still work out together every summer and play competitive one-on-one games to challenge one another. Thompson said playing against his former teammates keeps their chemistry at the level it was at during college.

Thompson and Crawford will lead the backcourt for 120 Sports and reunite for the first time in a competitive game since the 2010-11 season. Both have emerged as effective scorers abroad in the interim — Thompson put up 17.9 points per game last season, while Crawford averaged 16.2 points per game on 54.1 percent shooting from the field.

Crawford said his chemistry with Thompson will be pivotal in the team’s success.

“Because we see each other every summer and work out together, I think we still have that chemistry,” Crawford said. “Getting back on the court, it will take a day or two to get the rust off and remember everything but we’ll get it all back quickly.”

As the No. 8 seed in the midwest region, 120 Sports will play its first game July 16 against the No. 9 Bradley alumni team. If it advances, the team could run into alumni teams from some of college basketball’s best programs, Kentucky and Michigan State.

Along with some of the most prestigious college alumni bases in the country, 120 Sports’ region also features a team fielding former NBA star point guards Jason Williams and Mike Bibby.

“We all watched Jason Williams growing up, he was a hero,” Gibbs said. “That would be pretty cool. I haven’t taken a huge look, but there’s a bunch of storylines. I think that’s one of the big things with this tournament, just the storylines.”

Williams and Bibby are known for their flashy passing, and after putting up big numbers in France, Thompson, NU’s all-time leader in assists, is hoping for a potential matchup against them.

“I know in our region we have Michigan State and Kansas State — I know those are some pretty good teams,” Thompson said. “But I see Jason Williams and Mike Bibby, and I would love to compete against them. Obviously they are older and they’ve been out of the NBA for a while but they have that experience, so I would just like to compete against them.”

The Cats will have a chance to shed their negative tournament reputation in TBT this year, and Doyle and Moore said the team has a legitimate chance of winning it all.

The team is optimistic going forward, and open to including younger NU players like Alex Olah and Tre Demps. But before the team considers expanding its core of Cats players, Moore said he’s focusing on capitalizing with the team he has now.

“I wouldn’t waste three weekends of my life if I didn’t think we had a real shot of winning $2 million.” Moore said. “I’m going in thinking win it or bust. It’s all or nothing for me.”