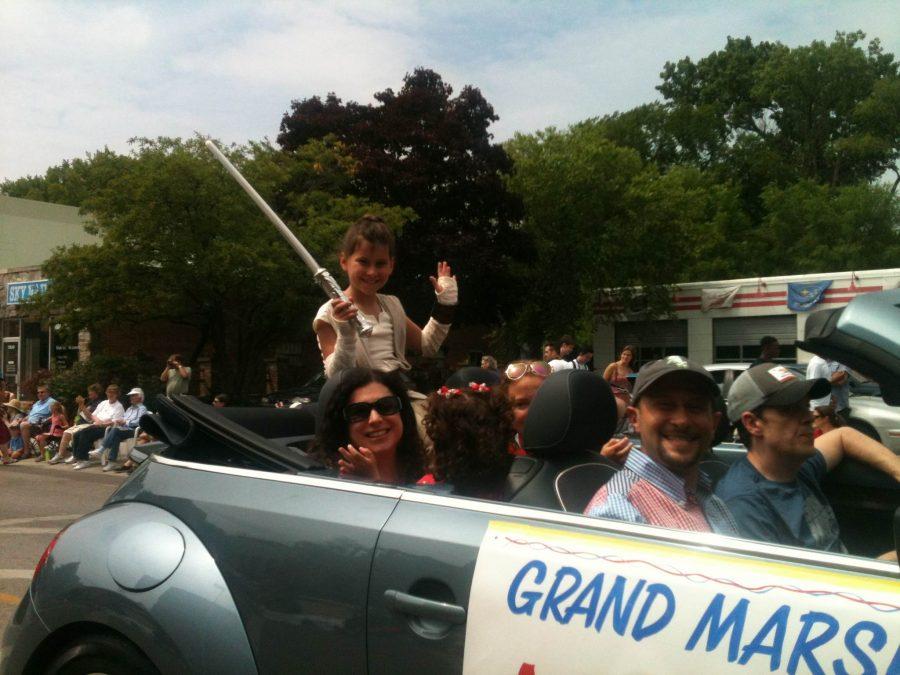 Annie Rose Goldman leads the Evanston Fourth of July Parade as the Grand Marshal. The 9-year-old was given the honor after writing a letter to Hasbro asking the company to add Rey, the female protagonist of "Star Wars: The Force Awakens," to its Star Wars Monopoly set.

As the Evanston Fourth of July parade traveled down Central Street, all eyes were trained on 9-year-old Annie Rose Goldman.

In January, Goldman pressed Hasbro to add a game piece based on Rey, the female protagonist of “Star Wars: The Force Awakens,” to its Star Wars Monopoly set. Her letter to the company sparked the successful #WheresRey campaign. Evanston honored Goldman by decreeing her Grand Marshal of this year’s parade, themed The Fourth Awakens.

“Me and my sister were always huge Star Wars fans,” Annie Rose Goldman said. “We were really excited about the new Star Wars movie. When I found out that they hadn’t included Rey in the Star Wars Monopoly, I thought that wasn’t fair, seeing as Rey was the movie’s hero.”

Determined to catch Hasbro’s attention, Goldman said she wrote a letter to the company and asked her mother, Huffington Post blogger Carrie Goldman, to publicize the message through social media. Afterward, the picture of the freckled girl holding a sign demanding gender equality went viral.

The family, who usually travels on July Fourth, decided to stay in its hometown of Evanston this year after Annie Rose Goldman said she received a call to participate in the city’s annual parade.

“As marshal, my duties are just to smile and wave and be cool,” she said.

For the parade, she wore a white robe with her hair tied up in three buns trailing down her back, replicating Rey’s hairstyle. She sat on the hood of a dark grey Volkswagen waving to the crowd, who chanted “We love Annie.”

Katie Goldman, her older sister, sat in front of her and played with a blue lightsaber.

“I was bullied in third grade because I was a girl who liked Star Wars,” Katie Goldman said. “This was B.S. and so my mom wrote an article about it.”

After Carrie Goldman’s piece on her older daughter’s experience was published in 2010, Katie Goldman said LucasFilm, the company that created the Star Wars franchise, reached out, flew the Goldman family to London to visit the production site for the Star Wars movies and honored Katie Goldman with a replica of an outfit from the original film.

As young girls lined the street to watch Annie Rose Goldman ride by, Andrew Goldman said his daughter “understands the power of speaking up for the things you believe in.”

“Being honored in this parade and seeing the impact she has on girls reinforced her idea that if you speak up, people will listen and you can effect change,” he said.