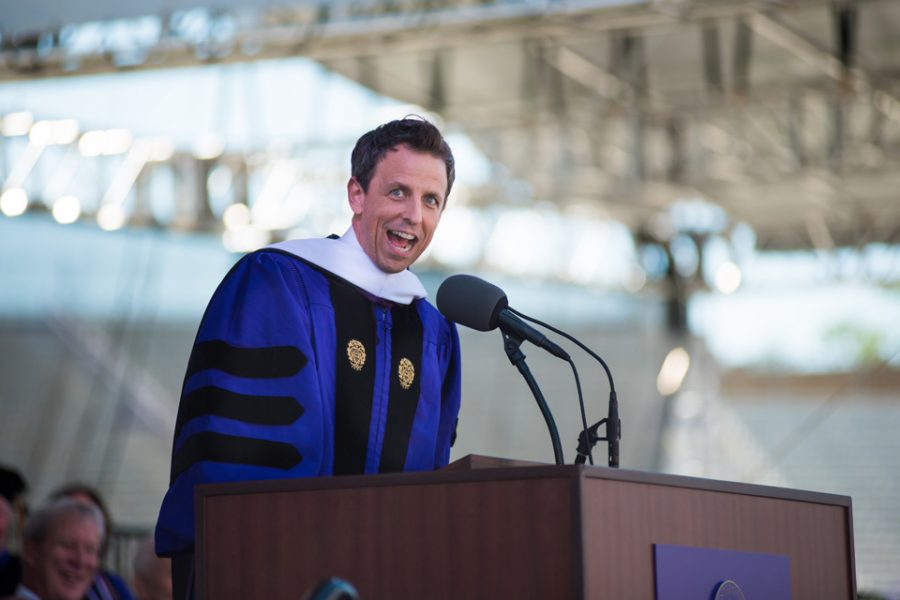 Seth Meyers (Communication '96) addresses the class of 2016 during this year's commencement ceremony. In his speech, Meyers, host of NBC's "Late Night with Seth Meyers," poked fun at his own Northwestern experience and urged students to vote in this year's presidential election.

Seth Meyers (Communication ’96), host of NBC’s “Late Night with Seth Meyers,” told members of the class of 2016 on Friday to cherish the friendships they made at Northwestern as they embark on the next chapter of their lives.

Meyers, who began his career as a comedian in NU’s Mee-Ow comedy group, shared stories of his time at NU and of his own commencement ceremony with graduates at the 158th annual commencement at Ryan Field.

During an address marked by jokes and commentary that drew plenty of laughter from the crowd of about 15,000, Meyers said he was hesitant at first about being this year’s commencement speaker. He only agreed after realizing he couldn’t remember anything said by his year’s speaker, Robert Redford.

“My words won’t be what stays with you from today,” he said. “Today is the culmination of your journey and your achievements. So, while I’m speaking, I invite you to drift off and remember your favorite parts of the last four years. Remember what you accomplished and what you overcame and the fun you had and the people you met because that’s what will stay with you.”

Meyers said not a day goes by that he doesn’t think about his time at NU. The friends he made here, he said, are still very dear to him. He encouraged students to identify close friends and, jokingly, also told them to cut ties with the “friend that is kind of a dud.”

He also advised graduates to not let older generations blame them for the world’s problems, saying they’re too young to be at fault.

The worst things that happen in the U.S., Meyers said, “don’t happen because of hate or rage or fear, they happen because of apathy.” He encouraged graduates to “be people of action” and vote in this year’s presidential election.

Meyers, who was awarded an honorary Doctor of Arts degree at the ceremony, emphasized the important role NU has played in his professional and personal lives. He said he wouldn’t “physically be anywhere” if it weren’t for the poetry class his parents met in during their time at NU.

“My mother still remembers the first thing my father ever said to her: ‘Let’s make a baby who will one day speak at commencement,’” Meyers said. “And she said to him: ‘Will they remember his speech?’”

Instead of coming up with his own inspirational quotes, Meyers poked fun at NU’s late commencement date and said he decided to pull quotes from speeches already made across the country.

“He said to graduates of Trump University: ‘If you want your money back, you’re going to have to sue me, you losers,’” Meyers said.

Meyers ended his speech by joking about what University President Morton Schapiro might say next.

“I saw that the next thing President Schapiro is scripted to say is, ‘Thank you, Seth, for those inspiring words,’” he said. “I want to see if he still says them.”

“Whether it is in medicine, law, engineering, consulting, whatever career path we may chose to follow, I hope we can use our Northwestern experience and find the same hard-earned success that Seth has found,” he said.

“When you ask us tonight where we’re going or what we’re doing next with our lives, thank you for letting us confidently admit that we may not know just yet,” he said. “But whether or not we can make a difference in the world right now, we can make a place for ourselves in the hearts of those we meet.”