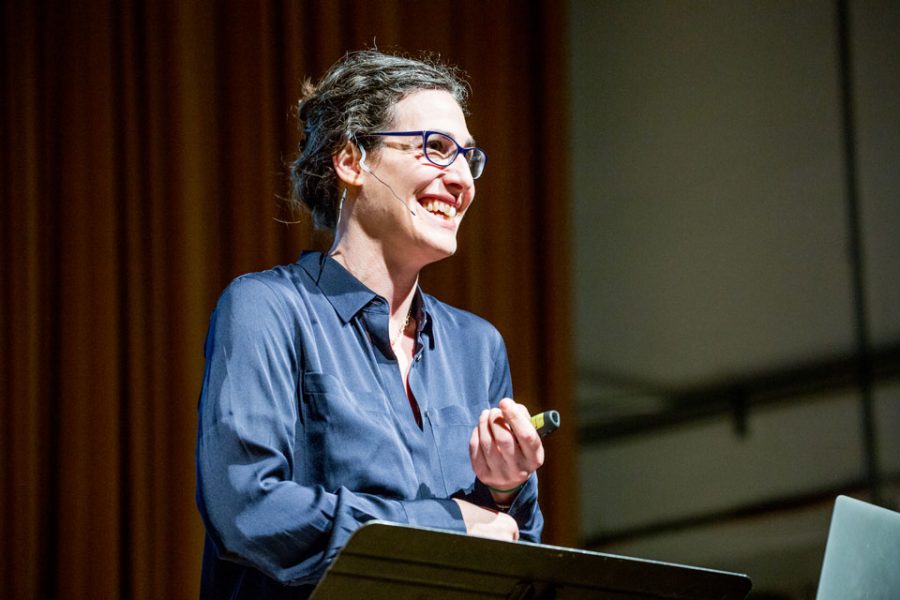 Sarah Koenig speaks in Ryan Family Auditorium. The creator of "Serial" discussed the popularity of the podcast, which has been downloaded more than 217 million times.

Sarah Koenig, creator and host of “Serial,” never thought the show would become the world’s most popular podcast.

“Nobody listens to podcasts,” she said. “We thought if we could get 300,000 listeners, that would be great, that would be a tremendous number for a new podcast.”

During a visit to campus on Thursday, in a talk hosted by the Contemporary Thought Speaker Series, Koenig said the podcast has now been downloaded more than 217 million times.

“We have been downloaded in every country in the world except for North Korea and Eritrea,” she said. “North Korea I kinda get, but I’m like, what the hell is up with Eritrea?”

About 250 audience members attended the talk at Ryan Family Auditorium, where Koenig also spoke about the podcast’s origins. She said she and her executive producer, Julie Snyder, originally pitched an idea for a podcast that would talk about weekly news. This was not very well received by their colleagues and their boss, Ira Glass, but it led them in a different direction toward the concept for “Serial.”

Koenig, who began working as a producer for the podcast “This American Life” under Glass in 2004, credited a lot of the show’s success to Snyder, emphasizing the collaborative nature of their relationship. Koenig said Snyder was just as involved with the project as she was, handling the managerial production while she focused on the investigative reporting.

The podcast’s first season focuses on the 1999 case of Adnan Syed, a Maryland teenager who was convicted of first degree murder after being found guilty of strangling his ex-girlfriend, Hae Min Lee. And although Koenig was unable to find out the full truth behind the case by the end of the podcast, it received extensive news coverage — from articles and reviews to conspiracy theories on blog sites such as Reddit that questioned whether or not he actually committed the crime.

Koenig said there was a point in which she and the crew became concerned about listeners posting personal information about some of her sources online.

“It was the first time for me — and I think for everybody working on ‘Serial’ — where we thought we were losing control of our story,” she said. “Which, when you’re working on something this sensitive, is a terrible feeling.”

Online speculation also surrounded her relationship with Syed, which she said wasn’t a friendship but also wasn’t exclusively professional. She collected roughly 42 hours of taped calls with Syed, many of which are made up of conversations that didn’t have much to do with the case, she said.

Koenig said Syed, who was sentenced to life in prison, told her he was telling her parts of the story he had never told anyone else.

“In these calls, I do not know whether Adnan is guilty,” she said. “I think it is really possible that he’s innocent, but I don’t know.”

In an interview with The Daily before the event, Koenig said she realize that she had become a character in “Serial,” and that wasn’t a conscious decision. She said this is common in audio journalism because tape is captured in the moment and, unlike print, it can’t be edited to take the reporter’s reaction or response out.

Season two of “Serial” focuses on the case of Pfc. Bowe Berghdal, a Taliban prisoner for nearly five years who, after being rescued, was charged by the U.S. military for deserting his post.

Koenig’s visit followed a talk Snyder gave last month at the McCormick Foundation Center Forum, where she also spoke about the podcast and Koenig’s role in it. Sami Rose, a Communication junior and a member of CTSS, said the group decided to invite Koenig because there is a significant “Serial” fan base at Northwestern.

Erin Manning, a Communication junior and “Serial” listener, said she was excited to hear the storytelling process behind the famed podcast.

“I enjoyed her going through the process and sharing some of the documents they had and the behinds the scene stuff,” she said. “So much more goes into it than just the 45 minutes that we hear from week to week.”