The Daily Northwestern • May 31, 2016 • https://dailynorthwestern.com/2016/05/31/top-stories/karl-eikenberry-responds-to-criticisms-of-military-background-during-northwestern-visit/ 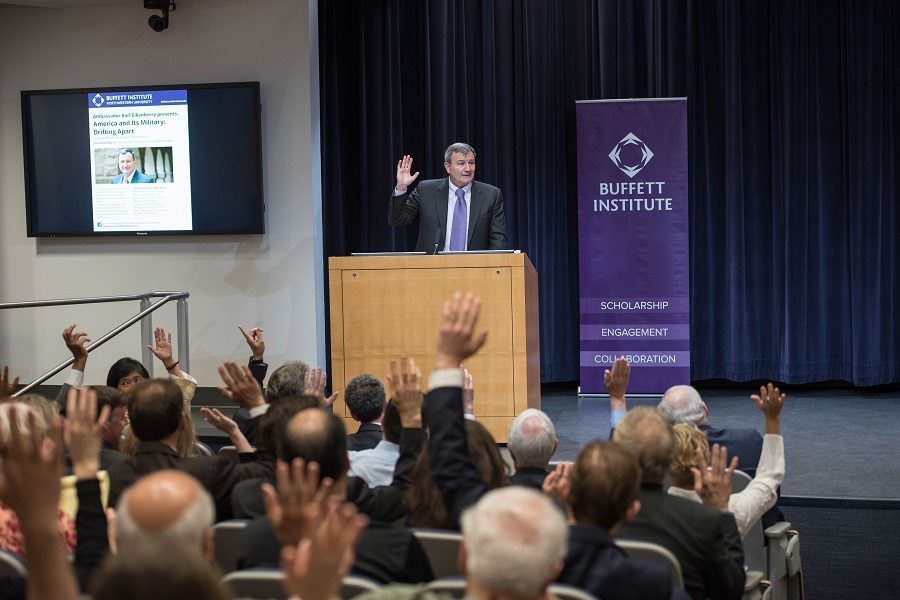 Former ambassador Karl Eikenberry asks the audience to raise their hands if they or a family member have served in the military. Eikenberry spoke about the growing divide between the United States military and the country's citizens during a talk held Tuesday.

Former ambassador Karl Eikenberry said he “regretted” not being able to become executive director of the Buffett Institute of Global Studies during a visit Tuesday to Northwestern more than a month after he pulled out of the position.

Eikenberry refuted the idea that his military background disqualified him from leading a humanities-focused organization, saying he would have had the expertise to connect students to global issues. Eikenberry was selected to serve as executive director of the Buffett Institute in November, before debate mounted at the beginning of the year over whether he had the credentials to lead the research institute.

“Some of the criticisms that became public, they represented … to my mind, the very worst stereotyping of the United States military that one could possibly engage in,” Eikenberry said in response to a question from McCormick junior Nicholas McCombe about reactions to his nomination.

“That’s a short answer,” Eikenberry told McCombe. “We could go on longer over a beer sometime.”

During the event at the McCormick Foundation Center Forum, the former ambassador lamented the growing divide between the United States military and the country’s citizens — millennials in particular. Considering only 3 percent of the generation are veterans, Eikenberry said millennials have less respect for hierarchy, a value inherent in the military.

“Our armed forces are struggling with the recognition of the personalities of your generation, of the millennial generation, and trying to make necessary adjustments to it,” he said.

Eikenberry recalled his first army assignment in Korea in 1973 — the same year the military draft was lifted — during which he said he observed a collapse of discipline within the ranks. In the decades since, Eikenberry said U.S. citizens have become more and more detached from the military, while appreciation for the troops has been whittled down to “corporate-inspired patriotism.”

“Many of the post-draft generation, when expressing gratitude to uniformed members of the armed forces as they pass by in airports, would be more accurate and sincere if they said, ‘Thank you for making it possible for me not to serve,’” Eikenberry said.

The former ambassador, who spent 35 years in the U.S. Army, retired from his role of lieutenant general in 2009. He then served from 2009 until 2011 as the U.S. ambassador to Afghanistan. Eikenberry is now a faculty member of the Shorenstein Asia-Pacific Research Center at Stanford University.

Robert Banas, a Communication graduate student and Army veteran, said millennials may be less inclined to enlist because of the unpopularity of the wars during their lifetimes. Banas, who spent a decade in the army, said the difficulty of transitioning from military life may also prevent some young people from enlisting.

“If our veterans are having this much trouble getting out, that’s going to deter people from volunteering to join in the future,” said Banas, who is president of the Northwestern University Veteran’s Association.

Eikenberry said the U.S.’ all-volunteer force has resulted in a Congress comprised of representatives who have fewer military credentials and are less inclined to challenge management practices within the armed forces. The former U.S. commander in Afghanistan also said the lacking connection between Americans and the military led to reduced domestic grassroots activism in opposition to the conflicts in Iraq and Afghanistan.

McCombe, who brought up Eikenberry’s nomination after over an hour of the event, said he was surprised that the question hadn’t already been asked. Roughly 200 people — few of them students — attended Eikenberry’s talk.

Provost Dan Linzer told The Daily in April that he believed if Eikenberry visited campus and began engaging with faculty and students, “they would all see that these worries were not real worries.”

SESP junior Matt Herndon, one of the authors of an Associated Student Government resolution asking the University to rescind Eikenberry’s appointment, said criticism of Eikenberry was not rooted in the fact that he merely served in the military but that he reflected its ideologies. Herndon also said it was frustrating to listen to people talk about millennials in a room where the generation itself was underrepresented.

He said part of the reason fewer millennials are enlisting is that many don’t agree with the military’s politics and history.