The Daily Northwestern • May 27, 2016 • https://dailynorthwestern.com/2016/05/27/sports/the-sideline-for-abby-steketee-northwestern-is-home/

The Sideline: For Abby Steketee, Northwestern is home 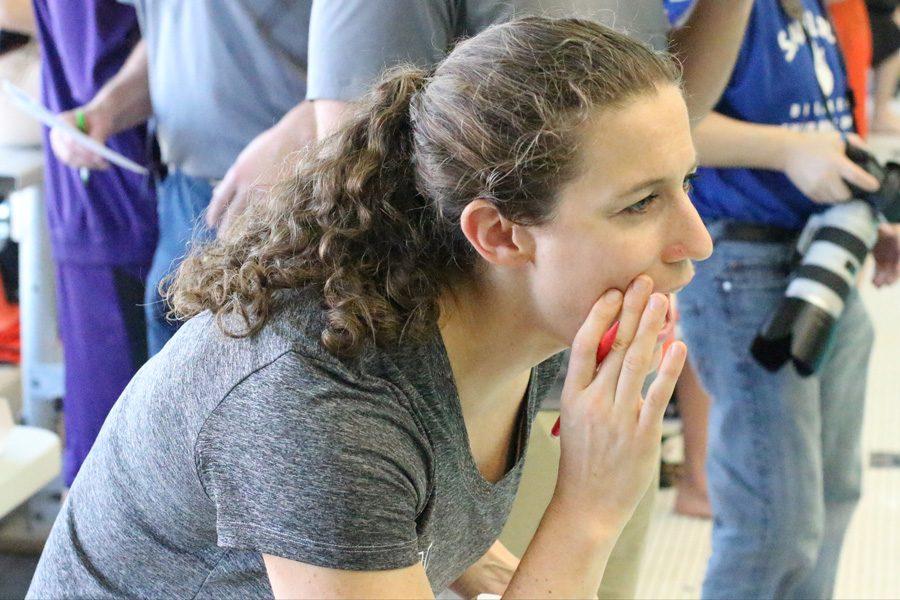 When Abby Meadema first visited Northwestern as a prospective student in the late 1990s, she was struck by Steve Steketee’s name on several school swimming records. The poolside record board may have lauded Steketee’s athletic feats, with multiple school records and a Big Ten championship in the 200 yard freestyle — but for her, his “unfortunate” last name was more memorable.

“She still thinks it’s a bad last name,” Steketee said of his wife, who is now the head coach of NU’s women’s swim team.

Interjecting, Abby Steketee — who took her husband’s name despite her distaste for it — countered by asking him to “try to spell it over the phone some time.”

“I took classes in every single school (at NU) except engineering,” she said. “Eventually I switched to SESP when I realized I wanted to do interesting things with interesting people. It’s broad and all about personal connections.”

During her sophomore year, Abby Steketee approached Jarod Schroeder, then the head of NU’s youth swimming club, Northwestern Aquatic Swimming Association, about the possibility of coaching one of the age groups.

In addition to her job with the NASA team, Steketee was an accomplished member of NU’s club crew team. In 2002, her four-person boat beat out Indiana by 0.7 seconds for third place in a regatta with “more than 100 schools.” She was a team captain, and during her senior year she helped coach the novice rowers, driving to the boat house in a parking lot on Chicago’s South Side twice a day to train younger, less experienced teammates.

On the NASA team, Schroeder put Steketee in charge of the youngest kids who were just learning to swim. She coached about three hours a night to earn spending money.

“You’re basically fishing them out of the pool (at that age),” she said.

Among the kids she coached were Stephen Shull and Andy Jovanovic, now juniors on NU’s men’s team. Shull only vaguely remembers the specifics of being coached by Steketee as an 8-year-old kid who was brand new to the sport but said her impact on him has been clear.

“She was really fun and exciting on deck and didn’t let us take it too seriously,” he said. “She fostered a love of the sport that’s kept me going through the past 13 years.”

When asked how they met, Steve and Abby Steketee both turned and pointed to the corner of the pool furthest from their shared office. They said that they’ve only ever known each other as coaches.

“Right over there, coaching, under that record board,” Abby Steketee said. “He was coaching NASA too, and he was coaching the age group above my group so we were both on the pool deck at the same time.”

Now, about 15 years later, coaching together is still the basis of their relationship, as Steve Steketee is currently a volunteer assistant coach for the team. As husband and wife, their relationship extends beyond that of typical coworkers, which they said gives them a huge advantage over other teams. People often ask how they can work together, surprised that they don’t drive each other crazy.

After so much time spent together on the deck, they are able to communicate in a short hand of common experiences, problems and solutions — a privilege few other coaches have. Despite their shared memories, the Steketees said they are polar opposites when it comes to their coaching styles.

“We’re really complementary in that we’re different,” Abby Steketee said. “I’m really focused and tend to be task-oriented, while Steve is really good at being a pressure valve and balancing the other side. It makes us really efficient as a work unit … (Coaching together) is very rewarding, I don’t think many people get to work with their best friend.”

In 2003, Abby Steketee graduated in the top 13 percent of her class in SESP. After graduation she planned to attend the MFA program in creative writing at the University of Virginia, but that didn’t quite pan out.

Sergio Lopez, NU’s associate head coach at the time, had been hired to be the head coach of West Virginia’s men’s and women’s swimming programs, and Steve Steketee planned to follow him to Morgantown as an assistant coach.

“It was an easy choice (for me) to keep coaching — I liked being here at the pool, and people had always told me when I was a swimmer that I should be a coach,” he said. “I always said ‘No, no, I’d never do that.’ Famous last words.”

At West Virginia, she focused her studies on adolescent behavior and how to help teenagers make decisions about their health. At the time, the state had no laws regulating indoor tanning salons. There were no restrictions on radiation levels, bed sanitation or youth use of tanning facilities.

“That became my final project, I decided I wanted to get a tanning law passed,” she said. “Now West Virginia has a tanning law.”

During her final year at West Virginia, she helped lay the groundwork for a new tanning law. In 2013, six years after she completed her degree, her tanning salon bill was signed into law.

After completing her master’s degree, she again followed Steve Steketee –– who had been hired away from West Virginia the year before –– to the University of South Carolina where they both worked as assistant coaches with the swim teams.

“Coaching is addicting. There’s nothing quite like it in terms of the connection you make with someone,” Abby Steketee said. “I was a lot more fulfilled on the pool deck than I was going to a legislator and talking about indoor tanning.”

In 2011, the head coaching job for Nevada’s women’s team opened up. Steve Steketee suggested that she should apply — and she got it. Four years later, NU’s coaching job became available when longtime coach Jimmy Tierney left the team. She said she knew immediately that she wanted to come back to NU.

In applying for the job, Steketee said she gave everything she had. She said she got an interview, and later the same day, received a phone call from athletic director Jim Phillips asking if she’d “like to come home.”

Abby and Steve Steketee, who joined the program at the same time as his wife as a volunteer assistant coach, have brought new life to NU’s women’s swimming program. After finishing 10th with only 138 points at the Big Ten championships in 2015, the team finished 2016, their first year under the duo, by scoring 467 points to take eighth place at the championship meet.

“Abby is awesome, she’s the most organized person I’ve ever met,” junior Lacey Locke said. “She not only cares about our swimming, she cares that we grow as people.”

The Steketees both said they follow the philosophy that coaching is about much more than just physical training. They emphasize a set of values — people, character, integrity, passion and hard work — in their coaching to drive their swimmers to improve both in the pool and in academics. One of the most important parts of coaching, Abby Steketee said, is pushing people out of their comfort zones.

“We talk a lot about mental training with our team. This is a really cerebral group, if you give them the rationality behind motivation, that can motivate them too,” she said. “If you can give them the tangible science behind (a workout), they’ll go for it.”

At the end of the day, coaching for Abby Steketee is not about making the fastest swimmers. She says she tries to coach people, and placing higher in the Big Ten is just the icing on the cake.

“It’s not about where (the team) eventually ends up but about how we go about getting there, making sure everyone who comes to this program has a meaningful degree, is glad they did it,” she said. “It’s one of the reasons we wanted to come to Northwestern, we’re not just part of an athletics community, we’re part of a broader educational community of people committed to personal development.”