The Daily Northwestern • May 27, 2016 • https://dailynorthwestern.com/2016/05/27/campus/young-chicago-area-poets-explore-violence-inequality-at-ncdc-event/ 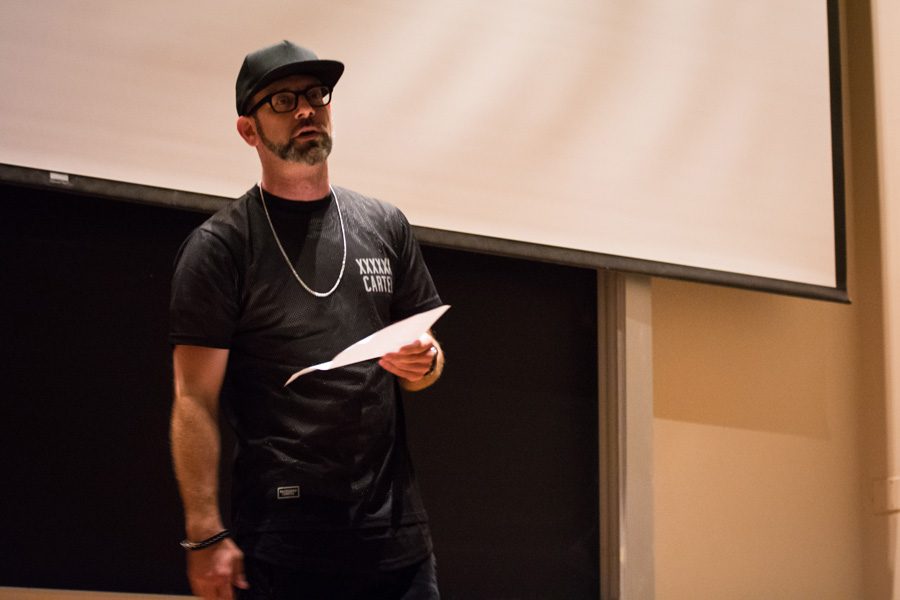 Kevin Coval, a co-founder of Louder Than a Bomb, speaks at Fisk Hall on Thursday. Coval spoke at an event hosted by Northwestern Community Development Corps that showcased young Chicago-area poets.

Michelle Solayman, a junior at Maine East High School in Park Ridge, said poetry has given her a voice and allowed her to write about the injustices in her community.

At an event at Fisk Hall on Thursday, Solayman stood alongside three other Maine East students as the four switched off in reciting a poem and listing the names of black people killed by police, such as Tamir Rice, who was shot and killed by a Cleveland police officer in November 2014.

“Building walls, dropping bombs,” they read, “all while packing black and Latino men into buses that follow the route of mass incarceration.”

The group was one of many from the Chicago area to perform at the event, hosted by Northwestern Community Development Corps. More than 150 students attended the performance, in which the teenaged poets used hip hop and poetry to discuss violence and inequality in Chicago.

Solayman and her peers were semi-finalists in Louder Than a Bomb, a poetry festival for young poets in the Chicago area.

“Writing poetry has changed my life,” Solayman said. “I am a happier person because I am able to verbalize how I feel and what goes on every day.”

Along with violence in Chicago, many of the poets spoke about police brutality and tensions with local officials, such as the city’s mayor, Rahm Emanuel (Communication ‘85).

“It is really crazy on the West Side right now,” artist Stark of HUEY said before he performed a poem. “Bodies falling left and right — there are kids from my high school that are dying right before my eyes. Sometimes it is hard to cope with, but the scary part is you kind of get numb to it.”

Kevin Coval, who founded Louder Than a Bomb, said he created the poetry festival to give teenage artists a platform to gather and discuss local issues.

Coval, also the artistic director of Young Chicago Authors, said before the organization was created, neighborhood divisions in Chicago made it difficult for young artists to work together. Coval added that he wanted to ensure the group was all-inclusive, particularly to female voices.

“Part of the space we are trying to create at YCA and Louder Than a Bomb is one that actively contests those dominant tropes of patriarchy and narratives that we think are problematic,” Coval told The Daily. “We try to create a space for anybody and everybody to be themselves fully, freely and unapologetically. We have seen young woman be themselves and emerge as great artists and great people.”

Weinberg sophomore Olivia Paulhac, campus outreach chair for NCDC, said she hopes the event sparks conversation on campus about inequality in Chicago. She referenced Chicago rapper Noname, who performed at the event, as an example of a minority voice in the city’s poetry scene who offered a new perspective.

Paulhac noted a lack of women among the performers at Dillo Day and said Thursday’s event allowed students to see a more diverse group of performers.

“(Noname) is a black woman in the rap scene which isn’t usual,” Paulhac told The Daily. “Her music addresses black feminism and the struggles of being a black woman. It’s great timing having just had Dillo, because it’s cool to have different kinds of artists and conversations about music.”

Weinberg sophomore Aaron Clarke said Noname, being a black woman in hip hop, will help inspire other young women interested in rap, where more and more female artists are emerging.

“Specifically women of color, she is a force in those communities,” Clarke said. “It is very material and very relational in terms of inspiring women to write.”