The Daily Northwestern • May 26, 2016 • https://dailynorthwestern.com/2016/05/26/ae/high-school-musical-increases-involvement-of-freshman-non-theater-majors/ 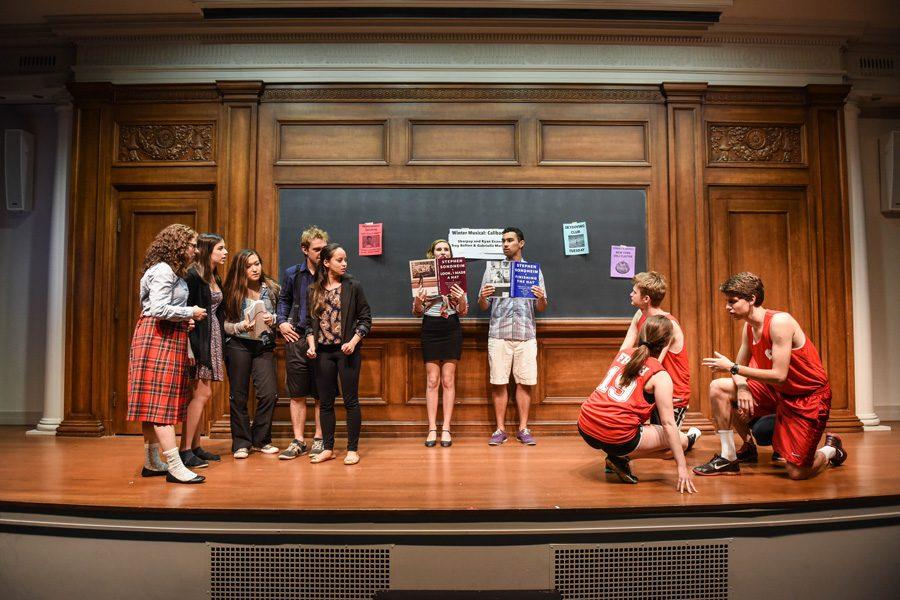 Students rehearse for the upcoming production of “High School Musical,” produced by and cast with a team of entirely freshmen students. The show will open May 27 in Harris Hall.

The cast and crew of this year’s Freshman Musical decided to demonstrate their enthusiasm for being new on campus by presenting a show that dates back to their childhoods: “High School Musical.”

“As freshmen, it is a really natural inclination to show the campus who we are and what we can do as artists,” director Noah Watkins said. “So, why not do a show that cannot possibly take itself too seriously?”

Entirely produced by and cast with freshmen, this year’s musical tells the story of Troy and Gabriella, two high school sophomores from different cliques, who audition for the lead roles of their school’s theater production. “High School Musical” is a Disney Channel original movie that was later adapted for the stage. The show opens Friday in Harris Hall.

Watkins, a Communication freshman, said the show is meant to act as a learning experience for all students. He added rehearsals for the musical offered a judgment-free space for actors to make mistakes and experiment.

“We have given people the opportunity to (take) risks (with the production) and to improvise around different things,” he said. “Some of our favorite scenes in the show even come from those moments.”

The cast and crew are working on a more “low-tech level” than many other student theater productions at NU due to their limited resources, co-producer Lucy Farnsworth said. She added the creative team was really excited to get a positive response from students outside the University’s theater department, who usually tend to hesitate to break into the scene.

Going into the interviews for crew members and casting calls for actors, Farnsworth said the creative team aimed to feature a wide array of experience levels in the rehearsal room. She added these included students majoring in areas other than theater.

“It wasn’t the plan (to have many non-theater majors), but it was definitely the hope for this process,” the Communication freshman said. “We were very happy when we started hearing from people who weren’t majors but were still excited to be part of our team.”

Out of the 46 members in the cast and crew of “High School Musical,” 21 are not enrolled in NU’s theater department, Farnsworth said.

In addition to trying to include cast and crew members of all backgrounds, theater-related or not, co-publicity director Meredith Mackey said the marketing team tried to use “big and funny” advertising to reach out to new theatergoers on campus.

“In marketing the show, we have been trying to make sure that we reach a very broad audience of people, that we’re not having the same audience that comes to every student theater show,” the SESP freshman said.

Mackey, who also serves as the incoming community representative for the Student Theatre Coalition — a group of 10 theater and two dance boards on campus — said acting as the voice for students who are not theater-board members or theatre majors is especially important in the theater community because those people represent a large part of it.

Mackey added that the first-year experience in theater needs to be positive, which is why part of her mission for next year is to emphasize the significance of having freshmen working on productions.

“It is an incredible opportunity to kind of expand theater’s horizons, and really set a precedent from the get-go that you do not have to be a theater major to get involved,” she said.