The Daily Northwestern • May 25, 2016 • https://dailynorthwestern.com/2016/05/25/sports/womens-tennis-lipp-chatt-prepare-to-represent-northwestern-in-ncaa-individual-tournaments/ 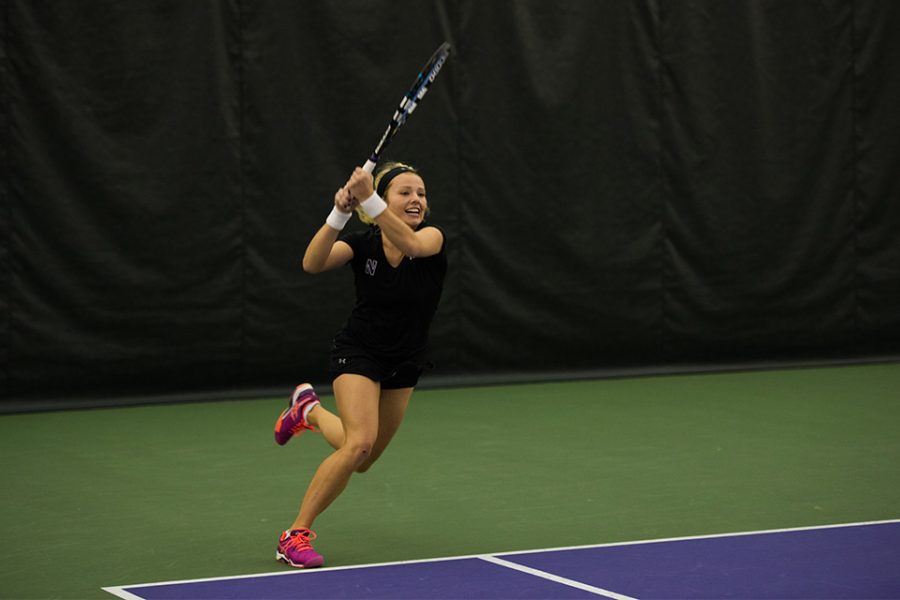 Alex Chatt hits a backhand. The sophomore, alongside doubles partner Maddie Lipp, will represent NU in the NCAA individual tournaments.

After Northwestern was eliminated from the NCAA tournament just 11 days ago, sophomores Alex Chatt and Maddie Lipp are eager to show the nation the Cats can hang with the top players in the country.

“We have to go in with the mindset that we have nothing to lose,” Chatt said. “We’re just as good as everyone out there.”

Though the team tournament is over for the Cats,  No. 52 Lipp will represent NU in the NCAA singles championship, while the No. 28 pair of Chatt and Lipp will compete in the doubles championship.

Despite the fact that sophomore Erin Larner played first singles for the majority of the year, Lipp has demonstrated the ability to dominate some of the top players in the country. Lipp’s biggest singles win was at No. 2 against Michigan, where she defeated No. 18 Brienne Minor 7-6, 2-6, 6-4 to clinch a 4-3 win against the Wolverines.

Lipp comes into the tournament hot, on the heels of a strong 6-3, 5-7, 6-4 win over North Carolina’s Whitney Kay, ranked No. 41 in the country. In addition, Lipp hasn’t lost a singles match since she fell to Ohio State’s Gabriella De Santis on April 17.

However, the sophomore will certainly have her hands full when she takes on No. 11 Belinda Woolcock in the first round. Woolcock played No. 2 singles for No. 2 Florida this year and has already competed in the Australian Open’s Main Doubles Draw.

In doubles, Chatt and Lipp showed they’re a pair to be reckoned with, logging wins over top-25 doubles pairs from Oklahoma State, Vanderbilt, Ohio State and Ole Miss this season. The duo most recently fell 6-3 at No. 1 doubles to North Carolina’s Hayley Carter and Whitney Kay, the No. 1 seed in the NCAA doubles championship.

If Chatt and Lipp can get past Harrison and Vozniak, they’ll have a tough potential matchup against the No. 2 seed, Kentucky’s Mami Adachi and Aldila Sutjiadi. Last year, the pair advanced to the Round of 16 in the doubles championship, and they’ve gone 9-4 against top-25 doubles pairs this season. The road for Chatt and Lipp won’t be easy, but the experience will be beneficial, coach Claire Pollard said.

“There’s no good draw at the NCAA’s,” Pollard said. “But it’s going to be great for them to have the opportunity.”