The Daily Northwestern • May 25, 2016 • https://dailynorthwestern.com/2016/05/25/sports/mens-tennis-wildcats-big-three-prepare-for-ncaa-singles-tournament/ 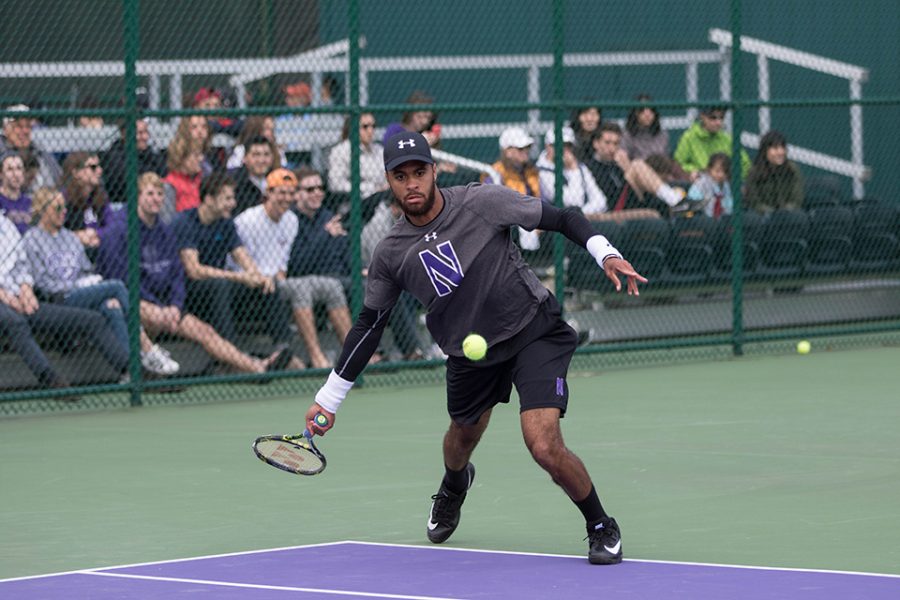 Sam Shropshire hits a forehand. The junior will be one of three Wildcats participating in the NCAA singles tournament in Tulsa, Oklahoma.

Northwestern’s season as a team may be over, but three Wildcats still have something to prove.

At the NCAA singles tournament beginning Wednesday, juniors Konrad Zieba, Sam Shropshire and Strong Kirchheimer will represent NU in Tulsa, Oklahoma. After his team suffered a difficult loss to Stanford in the NCAA tournament’s round of 32, coach Arvid Swan said the team’s singles players will be prepared to finish strong in the last tournament of the season.

“(We are) gonna work really hard and do what we do to get ready,” Swan said. “We got three guys who can be All-Americans, so we’ll be ready in singles that’s for sure.”

Having three players qualify for the 64-person tournament is a big step up for the Cats who only had Shropshire qualify in 2015, when he lost in the first round.

After the trio of juniors led NU to its best record in school history, it has its sights set on further successes this year.

In having three players qualify for the tournament, the Cats have proven themselves among the nation’s elite. Only three other teams had three or more singles players qualify.

The trio, along with fellow junior Alp Horoz, was part of the No. 8 recruiting class in the country in 2013.

The most striking development in the so-called “Big Three” this past year has been Zieba’s improvement. After playing No. 3 singles for most of last year, Zieba had a breakout fall campaign and continued his stellar play at No. 1 singles in the spring en route to a No. 20 singles ranking. Zieba has credited some of his improvement to extra time spent with Swan in the summer and fall.

“He’s put in a lot of extra time with all the guys,” Zieba said. “Over the summer and in the fall, whatever we needed to work on, he made time for us and really worked with us.”

Zieba’s rise led to Shropshire, who played No. 1 singles last season, moving down to No. 2, where he has compiled a 15-5 record in dual matches and currently sits at No. 40 in the singles rankings.

However, it is Kirchheimer’s move down to No. 3 singles from No. 2 that has been most striking. The junior is 30-3 in the season, good for the second-highest winning percentage in team history. Kirchheimer has only lost once at No. 3 on the year, a three-set loss to Illinois’s Aron Hiltzik, who he later avenged in the Big Ten Tournament. His dominance over weaker opponents at No. 3 singles earned him a No. 57 ranking.

In the bracket, Zieba has drawn No. 48 Or Ram-Harel of Tulsa, who he beat 6-4, 6-2 earlier in the year. Shropshire and Kirchheimer will be playing new opponents, No. 115 Alec Adamson of UC Davis and No. 35 Quentin Monaghan of Notre Dame, respectively.

Successful results from the players in the tournament would end the best season in team history on a positive note after the team’s recent NCAA tournament loss.