The Daily Northwestern • May 25, 2016 • https://dailynorthwestern.com/2016/05/25/campus/fox-business-host-john-stossel-discusses-his-libertarian-evolution-as-college-republicans-spring-speaker/ 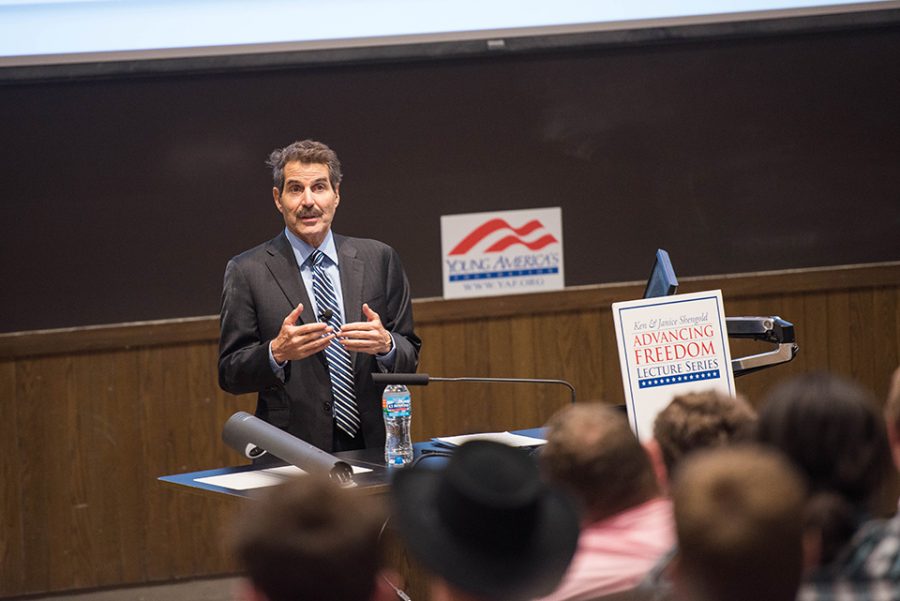 John Stossel speaks in Leverone Hall. Stossel, a host on the Fox Business Network, discussed his personal journey to becoming a libertarian.

Although he was speaking at an event hosted by College Republicans, John Stossel stressed he does not identify as a conservative.

“I’m not a conservative, I’m a libertarian,” he said. “People should be able to take whatever drugs they want once they’re an adult. … I think most of the stuff that goes on on Dillo Day is OK.”

The popular journalist and political commenter addressed a crowd of about 100 students and local residents Tuesday evening in Leverone Hall, sharing his story about how a career covering business led him to mistrust government.

Stossel reflected on his first journalism job as a consumer reporter for a local television station in Oregon. He said he frequently exposed the misdeeds of businesses but said that years on the beat showed him that government intervention rarely solved the problems he had unearthed.

“It is intuitive to think life works best if there’s some guy who went to Harvard who will tell people how to change the lightbulb,” Stossel said. “But I was an enemy of freedom without realizing it.”

Gradually, he said he overcame the “liberal university culture” he learned as an undergraduate at Princeton and embraced the philosophy of Adam Smith and other free market economists. The market, not government, became his preferred remedy to societal issues.

“(Regulations) are like barnacles,” Stossel said. “They never go away. They just grow new ones on top of the old rules.”

Drawing on stories from his life, Stossel also shared some of the political commentary he’s best known for as a host on the Fox Business Network. He criticized in particular the proceedings of the 2016 presidential campaign, denouncing both presumptive Democratic nominee Hillary Clinton and presumptive Republican nominee Donald Trump.

Stossel also offered a host of free market solutions to problems he said some see as being the responsibility of government. Many things that the government steps in to fix will improve on their own if market forces are allowed to work, he said.

“Even the most greedy factory owner starts to care about safety because he realizes it costs a lot of money to replace workers he kills,” Stossel said, drawing laughter. “The free market will do it better than the state will.”

He stuck by his libertarian convictions during a Q&A period with the audience, positing that even complex challenges such as global warming could be overcome by the right free market forces.

“I thought it was a great learning experience,” Weinberg freshman Kyle Berke

said. “He touched on a lot of very important issues, especially as they relate to free markets and generally the problems we face as a country.”

College Republicans president Jack Stucky said the mixed audience of students and community members was by design.The Weinberg sophomore said he reached out to local Republican and Libertarian groups to invite them to the talk because he knew Stossel would be popular among an older age demographic.

Stucky added that Stossel’s rhetoric has a way of reaching Republican college students.

“Republicans on a college campus tend to be more libertarian than conservative,” Stucky said. “(Stossel) said a lot of things that really clicked with a lot of students.”