The Daily Northwestern • May 24, 2016 • https://dailynorthwestern.com/2016/05/24/campus/black-house-improvement-recommendations-submitted-await-approval-by-student-affairs/ 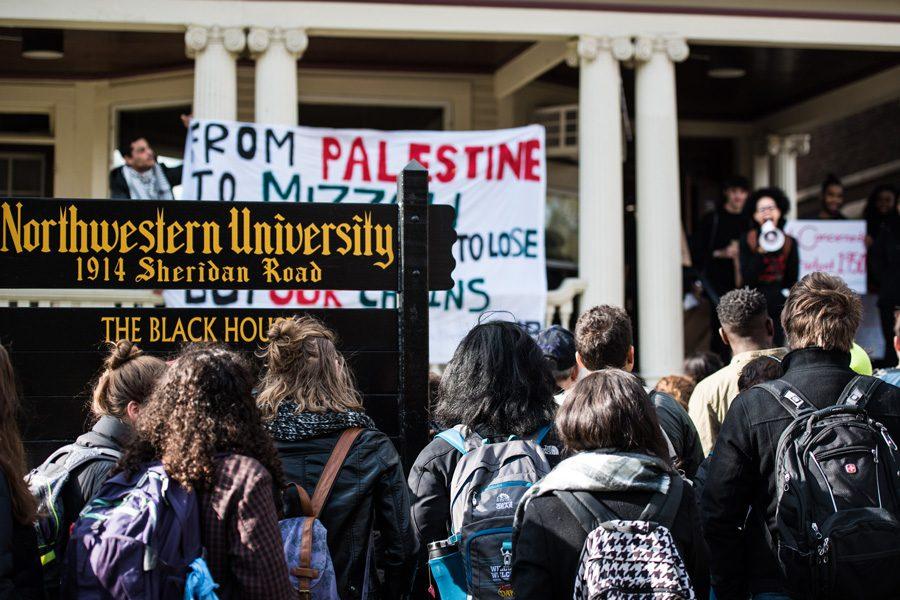 Students gather outside the Black House last November to protest institutional racism and proposed changes to the facility. By the end of Fall Quarter, the proposed changes were dropped and Patricia Telles-Irvin, vice president for student affairs, appointed two committees to evaluate the black student experience at Northwestern.

The Black House Facility Review Committee submitted its final report to the Office of Student Affairs, recommending the University upgrade the building and restructure the facility’s programming and leadership.

The committee’s final report, which became public Sunday, will be reviewed by Patricia Telles-Irvin, the vice president for student affairs, who will make a final decision on the recommendations this summer.

The report, which is the result of the committee’s months-long examination of the Black House’s facilities and role on campus, details different ways Student Affairs can work to enhance the Black House and black students’ experiences on campus.

Recommendations include reinstituting the associate dean-level position for African American Student Affairs, a role which disappeared after Student Affairs was restructured, as well as adding a soundproof practice room, an elevator and a free printing station to the Black House. The committee announced the news Sunday through the Northwestern University Black Alumni Association’s website and the Campus Inclusion and Community website.

Medill Prof. Charles Whitaker, chair of the Facility Review Committee, said the committee did not consider any of the more than 30 recommendations more important than the other.

“They’re all equally important,” said Whitaker, a former board member of Student Publishing Co., The Daily’s parent company. “The University should move to attempt to enact as many of them simultaneously as possible.”

Plans to move CIC offices into the Black House and the Multicultural Center resulted in outrage from some students, faculty and alumni. In response to the protests, administrators organized a series of listening sessions. The pushback also led Telles-Irvin to create the Black House Facility Review Committee to evaluate the house’s role on campus. In the end, administrators dropped the proposed changes.

The report divides its recommendations into four different categories: programming, facility and structural improvements, technology and the NUBAA archives. The committee also reported an architect will visit the Black House this summer to review the space and study the possibility of transforming the basement into an artistic practice space.

Weinberg junior Cheron Mims, the newly elected coordinator of For Members Only, NU’s black student alliance, said she liked the way the committee phrased its report, saying it describes the Black House not as a facility but as a place “where culture happens.”

“They look at it as like a landmark of sorts, as a really profound piece of history,” she said.

Whitaker said by submitting the recommendations, the committee’s work is complete. The measures must now be approved by Telles-Irvin, who is also collaborating with another task force to evaluate the black student experience at NU.

In an interview with The Daily last week, Telles-Irvin said this task force, the Black Student Experience Committee, is chaired by CIC executive director Lesley-Ann Brown-Henderson and will file a report this summer.

“They’re looking at data, they’re doing focus groups, they’re doing surveys,” Telles-Irvin said. “They’re really trying to get to the bottom of what the dissatisfaction is so that we can then create strategies and programs that will help our students feel good about being here at Northwestern.”

Telles-Irvin said she will meet with that task force in August, at the same time its recommendations come in.