Dial Up prepares to play at Dillo Day, looks to amplify presence on campus 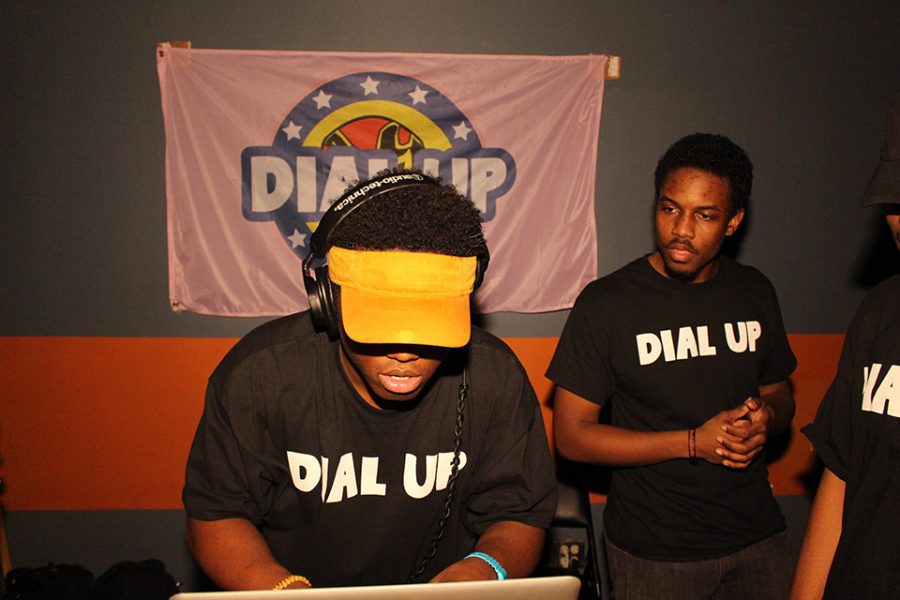 Dial Up members perform at an event. The DJ group won Mayfest Battle of the DJs and has earned a spot to perform on the Dillo Day main stage Saturday.

Members of the musical group Dial Up dished out a unique combination at last month’s Battle of the DJs: music and waffles.

In the middle of Dial Up’s performance, members of the group started passing out waffles and syrup to a crowd of people dancing in the venue for the past hour. All artistic significance aside, David Nkemere, who goes by the stage name DAVE PRIME, said he “just wanted to eat breakfast with everyone who came through.”

But Nkemere said seeing everyone responding positively to both the music and the waffles was very rewarding, as it kept his mind off of the competition for a moment.

Mayfest spokesman Ben Bass said the DJ group has a huge fan base which never fails to accompany them to events where they play music throughout the year. He said at the Battle of the DJs, which was hosted in Tommy Nevin’s Pub, 1454 Sherman Ave., on April 27, there was a crowd cheering for the group and feeding off of its energy.

“They played really energetic and fun music and the whole room was just bouncing and dancing up and down, and having a really great time,” the Communication junior said.

The group’s origins go back to Fall Quarter 2014, when the “Dial Up” radio show was christened by McCormick juniors Michael Martínez and Bomani McClendon, the group’s co-founders, on WNUR. Nkemere, then a freshman, said he had met Martínez during Wildcat Days and became interested in the group’s work.

Soon enough, the duo taught Nkemere how to DJ and later invited him to host the show with them on a regular basis, Martínez said.

“David came on as our apprentice,” said Martínez, whose stage name is Stamina Jones. “He basically just broadened our horizon of the music that we were playing and of the feel and personality of our show.”

In its DJ gigs on and off campus, Dial Up mixes different types of rap music and plays original pieces, Nkemere said.

With the addition of several new members over the past two years, Nkemere said the radio show has since branched out to two new exploits: a quarterly magazine and a biweekly podcast, with a pilot episode uploaded about three weeks ago.

Nkemere said the radio show acts as a basis for Dial Up to employ its sense of humor in discussing the group’s interests and debut its original “radio mixing.” He said the podcast gives the DJ group the opportunity to have more creative control over what it shares with its audience.

“We realized very quickly that, although we all liked DJing, it was nowhere near close to our main passions and interests in life,” Nkemere said. “We figured if we got together our other interests, why don’t we pursue them and put them under the Dial Up name?”

The magazine complements this effort, because it combines the group members’ various talents into one project, Martínez said. What was originally a collection of ideas about the group’s general interests scattered across Google Drive and various Facebook and text conversations ended up being the magazine’s first issue, which was published this past summer, he said.

Despite its recent formation, Nkemere said Dial Up has built a large presence on campus. He said although he doesn’t know how the group will have developed two years from now, he wants to enjoy this moment.

“Realistically, I have no idea what’s going to happen,” Nkemere said. “At the end of the day, I’m just here with my homies playing music — so there’s nothing really to worry about. I’m pretty stoked for it.”