The Daily Northwestern • May 18, 2016 • https://dailynorthwestern.com/2016/05/18/sports/mens-golf-wildcats-close-season-just-short-of-ncaa-championship/ 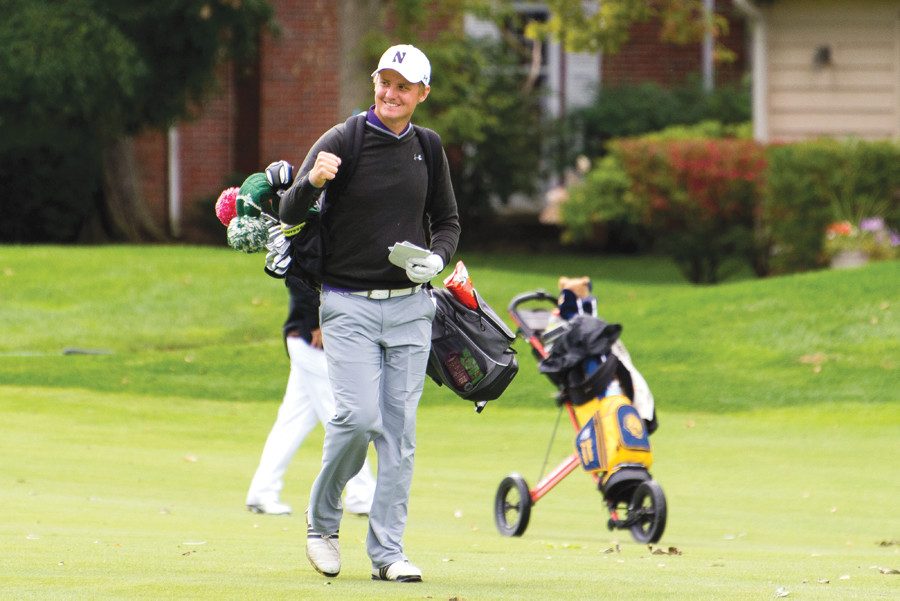 Josh Jamieson pumps his fist. The senior finished 32-over par at the Stillwater Regional.

Northwestern’s season came to a close Wednesday, as the Wildcats finished seventh in the NCAA Stillwater Regional, finishing 12 strokes behind Purdue, the last team to qualify.

NU finished the tournament at 58-over par, while Purdue finished 46-over and champions and hosts Oklahoma State finished 7-over.

The Cats were led once again by sophomore Dylan Wu, who opened the tournament with a blistering 2-under 70 on Monday, but finished 6-over par on a rough Tuesday. He eventually landed tied for sixth at 5-over for the tournament, five strokes behind champion Kristoffer Ventura of Oklahoma State.

Wu tied for the tournament lead in birdies with 11, and shot 5-under on par-5s over the three days, tying for the lowest score on such holes.

“My drive was definitely the best part of my game this week,” Wu said. “I put the ball in play a lot and hit a lot of fairways. I think I drove the ball perfectly.”

The 2016 season represented a return to the NCAA Regionals after NU failed to qualify in 2015. This year’s seventh place finish was a significant improvement on the Cats’ previous regional performance, when they finished in last place in San Antonio in 2014.

Freshman Ryan Lumsden was NU’s second-highest finisher, shooting 12-over to tie for 22nd overall. Sophomore Sam Triplett finished 18-over, while seniors Andrew Whalen and Josh Jamieson finished 26 and 32-over, respectively.

“I hit some really good iron shots,” Lumsden said. “I was also able to fight through some adversity quite well. I didn’t let bad holes bother me, and I also bounced back and made a few good birdies.”

NU opened the tournament with an impressive 12-over round Monday, good enough to tie for third headed into Tuesday’s round.

The wheels came off Tuesday, however, as the Cats shot the worst round of any team that day, shooting 31-over to drop to eighth place.

“The second round was just so disappointing,” Inglis said. “We weren’t able to grind out a decent score. We couldn’t do things that we’ve really worked hard at and practiced for, being ready to compete when we had some adversity. We weren’t tough enough on Tuesday.”

NU closed the tournament with a solid 15-over performance Wednesday, moving up to seventh.

Scores throughout the week were high on the Karsten Creek course, as the difficult greens and overall length of the course challenged the golfers from all over the country.

“The golf course was just incredibly tough,” Inglis said. “It was really demanding, not only off the tee, but the greens were fast. It was definitely the toughest test we’ve seen all year.”

The seventh-place finish for the Cats was the best end to a season in the career of both Jamieson and Whalen, whose previous best finish came their freshman year when NU finished eighth in their regional.

Inglis, despite the team’s less-than spectacular finish, said he feels confident about the program moving forward.

“For sure it’s a step forward in the right direction after not making regionals,” Inglis said. “In pieces we had it. We had the essence and core of a good team. We just never put all of it together and played a great tournament.”