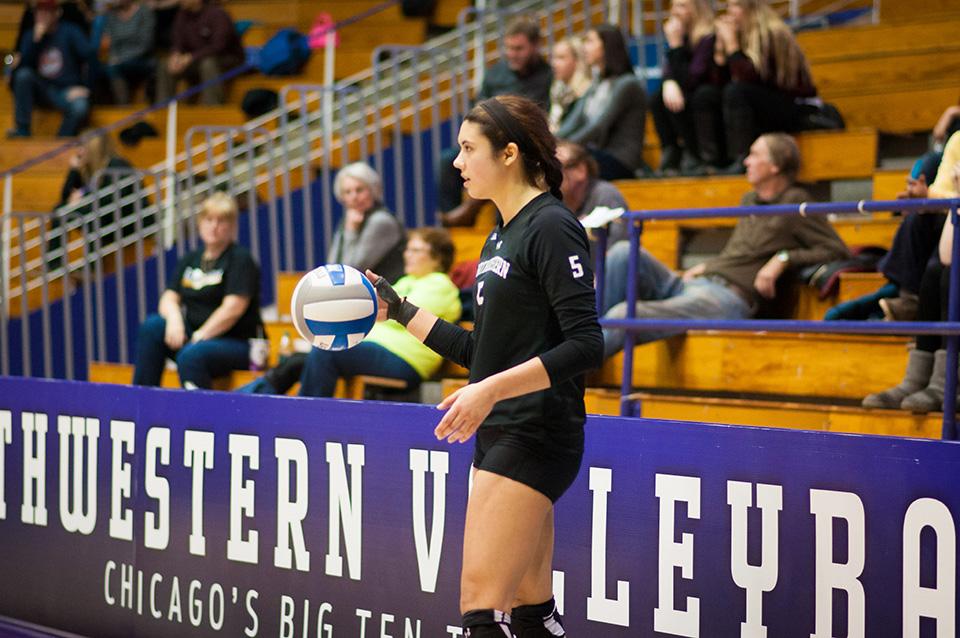 Niedospial, who got her nickname from being unable to pronounce “Caroline” as a toddler, began her volleyball career at age seven after going with her older sister to practices and tournaments. Sarah Niedospial’s love for the game, in addition to Caroline Niedospial’s admiration of her older sister, got the younger Niedospial hooked.

“I was very obsessed with it,” Caroline Niedospial said of her early volleyball days. “I missed some of (Sarah’s) games sometimes because I’d be practicing on another court. Eventually, I started playing club and I loved that and the rest is history.”

Niedospial said her entire family’s involvement in the sport, including her cousins, aunt and mother, helped her improve. They would play together at family events and her aunt coached a club team consisting of Niedospial and her cousins.

The Niedospial sisters’ mutual love of volleyball strengthened their relationship. After the older Niedospial graduated college, she returned to Chicago’s Marist High School, where she — and her sister — played. Sarah Niedospial was the head coach while her sister was on the team, and said she pushed her younger sister harder than everyone else.

“I knew her potential was really great; we kind of butted heads when I coached her, but it made our relationship a lot stronger because she really started believing in herself,” Sarah Niedospial said. “Everyone would always talk about my little sister because everyone was always so impressed.”

At Marist, Caroline Niedospial started as an outside hitter but eagerly made the switch to libero when she realized she wouldn’t be tall enough to play on the front line in college at only 5-foot-7.

In addition to gaining playing experience at Marist, she met Katie Krasowski, her teammate and eventual best friend, who went on to play for Eastern Michigan University. Krasowski said it was Niedospial’s hunger for winning that lit the team’s fire.

“She was always a huge driving force between our motivation to win, and you could always count on Carks for a huge dig or a huge point,” Krasowski said. “She’s always there and always motivating us.”

Her dedication to volleyball first blossomed from following in her sister’s footsteps, but it ultimately grew to have greater purpose: playing in the Big Ten, the most competitive collegiate conference in the country.

“Since I was like 12 years old, I always had the dream of playing in the Big Ten, so that’s always what motivated me,” Niedospial said. “When I got to high school, I always had that goal for myself.”

Niedospial spent her four years of eligibility playing as Northwestern’s libero and defensive specialist. When she steps on the court, Niedospial turns into a completely different person, from the silly, self-deprecating woman her family and friends see into someone who “lives and dies on every play,” her sister said.

Despite volleyball being her passion and outlet, the game has not always proved an easy road. After her freshman year at NU, Niedospial had an auxiliary bone removed from her foot, which doctors said would help alleviate her persistent foot pain.

Unfortunately, the opposite occurred, as she was forced to redshirt and said her feet still give her trouble almost four years later. Even though she missed a year on the court, she said the redshirt was surprisingly beneficial.

“During that (redshirt year), I got to watch the game more and that really helped,” Niedospial said. “I kept learning and finally feeling more confident and comfortable.”

She didn’t let the pain derail her when she returned. Niedospial returned as a junior and, as she had three years left of playing eligibility, ultimately decided to stay on for a fifth academic year. She will obtain a Master’s degree in June, and said the extra year helped her contribute more to the team and learn more than she could have in four years.

“My fifth year I felt really, really experienced, and I’m really happy I got to be there for so long,” Niedospial said. “I got to teach all the younger kids and got to share all the lessons I took with them. I knew that I was going to be here in the fall (of 2015), so I might as well get a grad degree.”

At the end of her collegiate career, Niedospial finished second in Wildcats history in digs with 1,788 and in 2015 ranked second in the Big Ten in digs per set at 4.66.

Looking back on her career at NU, Niedospial said she wished she could have told her freshman self to just relax and be in the moment more, a lesson she said she learned during her last year on the team. She said she also learned to not be too hard on herself for making mistakes because sometimes, they are inevitable.

“I remember I used to get so mad at myself after making a mistake, and I would beat myself up for it for hours after the game,” Niedospial said. “You just gotta get right back up and make a play at the next ball.”

What started as a desire to be like her older sister turned into a lifelong passion and driving force for Niedospial. After completing her senior season, Niedospial said she doesn’t want to leave volleyball behind and she plans to pursue a professional volleyball career in the fall.

Her toughest critic and inspiration, the older Niedospial, said her biggest regret in her career is never getting to play alongside her younger sister. Sarah Niedospial said her sister’s strength and drive has defined her volleyball career and stood out through her accomplishments on the court, off the court and everywhere in between.

“It kind of came full circle,” said Sarah Niedospial. “She always grew up idolizing me, and now I idolize her.”