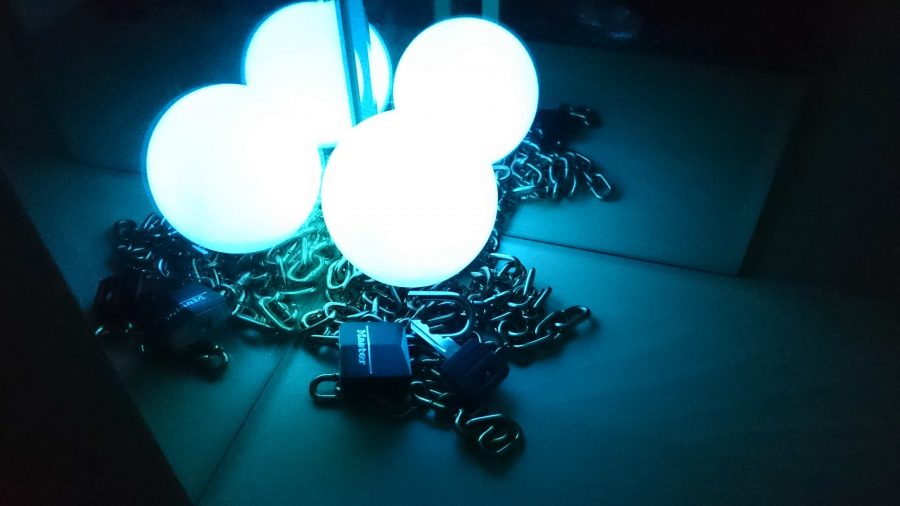 “Sunburn” is one of two escape rooms currently offered at Lock Chicago, 1601 Sherman Ave. The business has partnered with Mayfest to bring the first-ever mobile escape room to the Lakefill for Dillo Day.

In a new escape room that will appear on the Lakefill for Dillo Day this Saturday, the main attraction will be none other than a virtual caged armadillo.

A partnership between Mayfest and Lock Chicago, an interactive escape room venue that opened earlier this year at 1601 Sherman Ave., resulted in the Dillo Day-themed space. In the room, participants will compete against time to solve a series of puzzles — based on knowledge they have about the largest student-run music festival in the country — to free the armadillo, said Bane Srdjevic, co-designer of the room.

Escape rooms, which are inspired by the immersive qualities of video games, typically challenge teams of two to eight players to find clues and escape from the space within a 60-minute time limit. In this particular room, each team will only be allotted 20 minutes to solve fewer but “equally complex” puzzles, said Srdjevic, who co-owns Lock Chicago.

“It will be fun for people in a shorter amount of time, but it will give them the same amount of rush an hour-long escape room does,” he said.

Srdjevic said the design of the room veers away from the standard murder mystery plot and will instead be more “fun and lighthearted” in that it will relate to Dillo Day’s theme and history.

Mayfest spokesman Ben Bass said the space will be an “exciting” addition to the Lakefill, because it is a novel opportunity for students who have not yet had the chance to experience an escape room.

“People are going to have a lot of fun with it,” the Communication junior said. “This year our programming team has done a great job of finding some really awesome stuff to do on the Lakefill in addition to watching the musical acts.”

The Mayfest partnership with Lock Chicago also gave rise to a “Championship Week,” which took place May 1 to May 8 in the downtown Evanston venue. During that week, NU community members received a 30 percent price discount to compete in the two existing escape rooms, “Sunburn” and “Malfunction.”

Lock Chicago co-owner Brian Lee said they decided to host the event in addition to creating the mobile escape room because they want to increase the business’ exposure at NU. Currently, about 6 percent of the Lock Chicago participants stem from the NU student community, he said.

“Obviously we were college kids, too, so we know the price point is always going to be a big obstacle,” Lee said. “We wanted to make sure we could provide something that gives them the chance to go in and ties in with the festival.”

More than 125 students and faculty competed in the rooms during “Championship Week,” motivating the Lock Chicago owners to plan to host similar events twice a year, Lee said. Moreover, Lee said they hope to expand to a new space in Evanston toward the end of the year to fit more rooms, which they are currently designing.

The mobile escape room tent will stand opposite the food truck line May 21, near the WNUR stage.