The Daily Northwestern • May 16, 2016 • https://dailynorthwestern.com/2016/05/16/sports/baseball-wildcats-silenced-by-cal-tie-single-season-record-for-losses/ 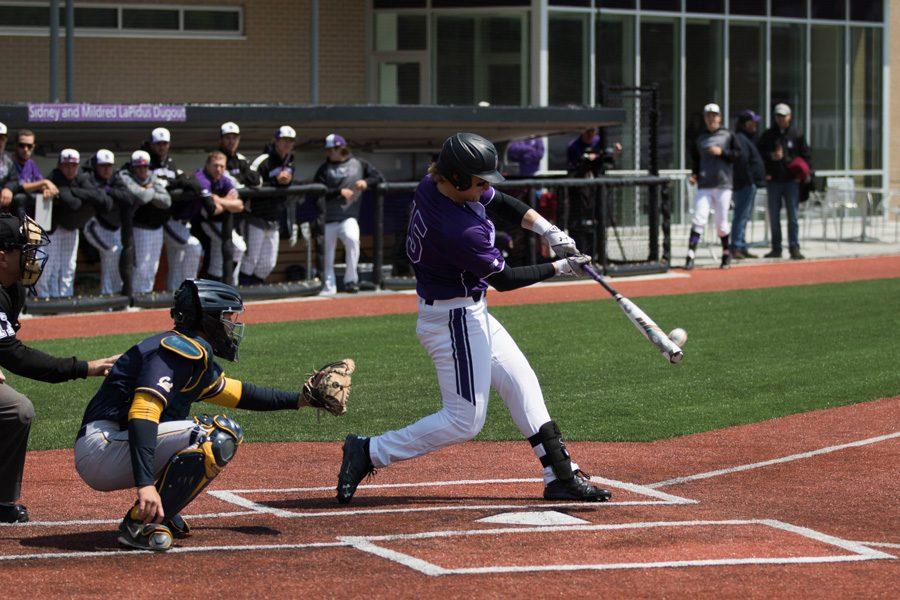 Connor Lind hits the baseball. The junior third baseman has been a rock for the Wildcats, starting all 51 games.

“It doesn’t matter if we had four or five more wins, the bottom line is we’ve got to get a lot better,” coach Spencer Allen said. “We’re not where we want to be and … I wouldn’t feel better if we had 20 wins and we didn’t tie the record.”

Monday also concluded the Cats’ home schedule, which they finished 5-14. The only opponents NU defeated in the newly-renovated Miller Park’s first season were Bradley, Chicago State and Purdue, the latter two of whom sit at or near the bottom of their respective conferences.

Allen said despite ending the home slate on a sour note, he is excited for the future of the program with the new facilities.

“(We had) some highs and lows, (Cal’s) a great team and that’s where we aspire to be, to be able to play at that level, and we’re not close right now,” he said. “I think it’s good motivation. We look at it and we could sit here and feel sorry for ourselves, or you can sit and go, ‘We’ve got some work to do.’”

The weekend began on a brief positive note, as the team’s six seniors were honored Saturday for their time as student-athletes. However, things quickly went downhill when Cal shut out the Cats 16-0, scoring at least 1 run in every inning.

First baseman Zach Jones, one of the seniors honored Saturday, recently collected his 200th career hit but went just 1-for-12 during the first three games of the series. Following a 2-for-4 performance in Monday’s finale, the Glenview, Illinois, native said he’s enjoyed his four years in Evanston but is ready for whatever’s next.

“It’s a little sad looking back that I won’t be playing any more baseball games as a Wildcat,” Jones said. “It is what it is. … It hasn’t really hit me yet but I’ll always have a lot of lifelong friends and memories, so it was a great experience for me.”

NU will travel to New Jersey as it wraps up the 2016 season against Rutgers. Even if the Cats sweep the Scarlet Knights and finish the year 16-38, the .296 winning percentage will be the program’s worst since 1970.

Pitcher Jake Stolley, who was also honored at Senior Day festivities, said he was disappointed at the outcome of the final home series of his career. However, he said that won’t stop him from competing in the upcoming season finale.

“Just try to end the season on a high note,” Stolley said. “I know Rutgers’ coach said they’re battling for a potential (Big Ten) Tournament spot … so they’ll come out to fight and we just have to match the intensity.”