The Daily Northwestern • May 16, 2016 • https://dailynorthwestern.com/2016/05/16/campus/bridge-club-hopes-a-national-championship-win-is-in-the-cards/

Bridge Club hopes a national championship win is in the cards 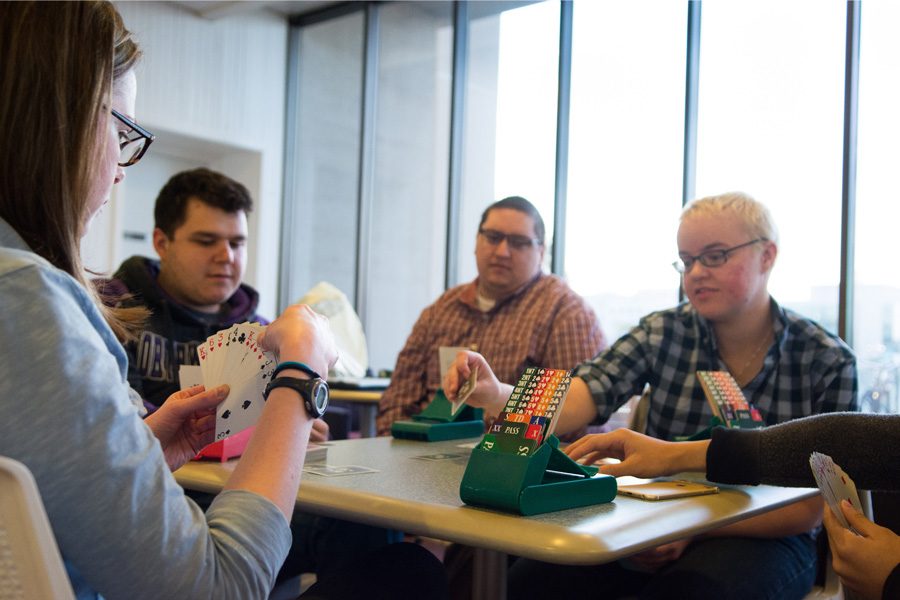 Members of Northwestern's Bridge Club play a game. The team is preparing for the 2016 Collegiate Bridge Team Championships, to be held in July.

Members of Northwestern’s Bridge Club aren’t strangers to the stereotype.

Every Sunday evening, these students meet at Norris University Center to face off in what’s colloquially known as “that card game for old people,” joked Weinberg freshman Kyle Rockoff, one of the club’s members.

For Rockoff, however, each practice provides a chance for him and the rest of the team to hone their skills in preparation for the 2016 Collegiate Bridge Team Championships. The two-day tournament is hosted by the American Contract Bridge League and will be held in July in Washington, D.C. The winning team will receive $20,000 in scholarship money, to be divided up evenly amongst the four members. This is the first time NU’s club has put together a competitive team since its founding in the 1980s.

Last month, the team qualified for the championships by ranking in the top four out of 17 universities and colleges nationwide. Ranking was decided based on accumulated points from preliminary online matches. Ahead of NU are University of Illinois at Urbana-Champaign, University of Chicago and University of California, Berkeley.

“I’m really excited,” Rockoff said. “I think it’s going to be fun, especially to play other teams live. It’ll be a fun dynamic to see other people our age playing and play the real duplicate style.”

Duplicate bridge is the competitive tournament style of the game. Partners sit across from each other at tables, and hands — the set of cards played — are passed from table to table. The same hands are played by different pairs who are seated in the same position at other tables. The methods of play are compared between competing pairs to evaluate who played better.

The club currently has about 10 members, with usually six to eight showing up for practices, said McCormick graduate student Kate Rutila, who has been in the club since her freshman year as an undergraduate at NU.

Rutila said low membership is one of the club’s greatest struggles. Despite having recently received club sponsorship from NU’s Student Organizations and Activities getting enough young people interested in the game is difficult, Rockoff said. Bridge was played in homes and on college campuses, but the older generation of players who grew up with the game and want to teach youths are challenged by modern forms of entertainment, he added.

This is something that seasoned players such as the club’s informal mentor, David Joyce, are trying to change. Joyce, a 74-year-old Kenilworth resident, has achieved a Life Master ranking in the realm of competitive bridge, which requires the accumulation of 300 master points –– points won in sanctioned tournaments.

Joyce has played competitively since he was in high school and said he is interested in encouraging younger people to play tournament bridge.

“The tournament bridge world would absolutely welcome them because we don’t have as many young people that we used to,” he said.

The challenge of drawing and maintaining interest is rooted in the complexity of the game, which requires players to understand the language of bidding and strategy, Joyce said. Bridge players have to be “bit by the (bridge) bug” and motivated to invest time into playing and studying the game, he added.

Having a collegiate club is one way of increasing youth participation, Rutila said.

“Bridge club is nothing like any student group I’ve ever been involved in,” Rutila said. “We’re just a bunch of people who want to have fun, spend time with friends and play a game that’s not just fun, but mentally challenging. There’s a lot of good to be had from playing bridge.”