The Daily Northwestern • May 15, 2016 • https://dailynorthwestern.com/2016/05/15/sports/mens-golf-wildcats-face-uphill-battle-at-ncaa-regionals/ 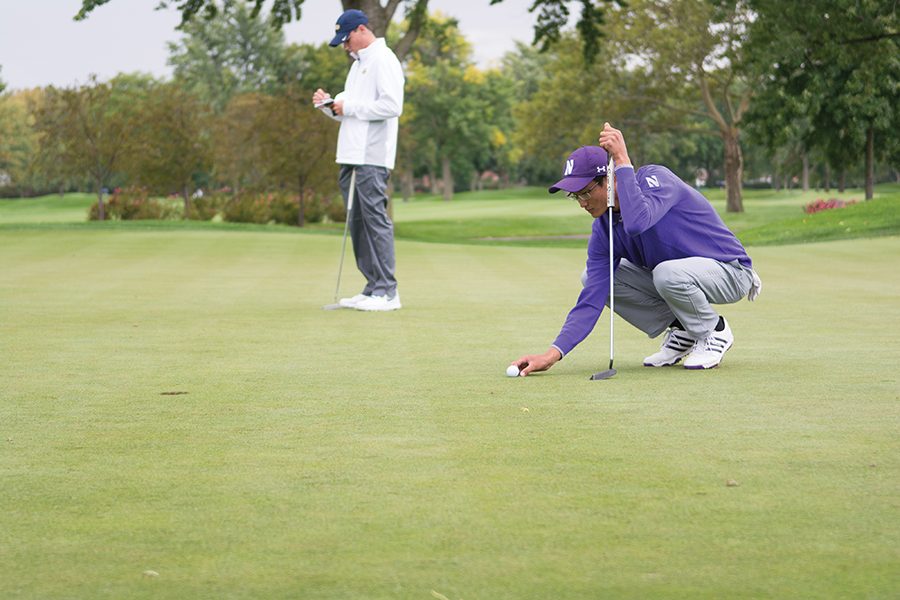 A Wildcat golfer prepares to putt on the green. Northwestern will face off against the No. 5 and No. 7 teams in the country in its regional bracket.

NU is the No. 9 seed out of 14 teams at the regional and will deal with the likes of No. 1 seed Oklahoma State and No. 2 seed Clemson, the Nos. 5 and 7 ranked teams in the nation, respectively.

“The nice thing about the NCAA Championship is that everybody starts on a level playing field,” coach David Inglis said. “It doesn’t matter what your ranking is going in here, nobody has an advantage, it’s whoever plays the best over the next three days gets to go. We’re just trying to play our way out.”

The Cats have been on a three-week break since their sixth-place finish at the Big Ten Championships, which earned them a spot in the regionals. They failed to clinch a spot last year following a seventh-place finish at Big Tens.

If NU finishes in the top five this week, the team will qualify for the NCAA Championships in Eugene, Oregon, making its first appearance in the final since 2011.

“Our team’s finally playing some good golf, we’ve got some momentum from Big Tens,” sophomore Dylan Wu said. “We just need to play three solid rounds. Having the NCAA Championships in Oregon, my home state, and playing a golf course I’ve played before quite often, it would be amazing.”

In addition to Wu, the lineup for NU will feature seniors Josh Jamieson and Andrew Whalen, sophomore Sam Triplett and freshman Ryan Lumsden.

Together, the group has played the Stillwater course zero times in their collegiate careers, only seeing the course for the first time in a practice round the day before the tournament.

“The greens were maybe as fast as I’ve played since I’ve been in college,” Jamieson said. “They’re pretty severe, pretty undulated, also they’re all very fast. You’ve just got to hit it onto the right part of the greens. You’ve got to be smart.”

With the three-week break, NU has had plenty of time to improve its game and the Cats have been putting in work in the meantime.

Jamieson in particular has worked to ensure his game is ready for the challenges he’ll face in Oklahoma.

“It’s just a long golf course,” Jamieson said. “The biggest thing for me was just trying to get my irons in sync, trying to hit better iron shots. The rest of my game felt pretty solid, so I wanted to keep it up, wanted to keep doing what I’m doing with my short game, which has been pretty solid.”

For Inglis, this is the first time he’s taking the team to a regional tournament. However, his predecessor, Pat Goss, currently director of golf and player development, has been with the team through 16 regionals and eight finals in the past two decades.

Despite the challenges that come with the course and competition in Oklahoma, Inglis said he does not expect the team to be fazed.

“It’s just set up for a true championship golf course,” Inglis said. “If you play well, you’re going to get rewarded, which is nice. You just have to have a lot of patience, and you have to have some toughness and grit because you’re going to face some really difficult shots.”