The Daily Northwestern • May 15, 2016 • https://dailynorthwestern.com/2016/05/15/sports/lacrosse-wildcats-wiped-from-ncaa-tournament-following-notre-dame-trouncing/ 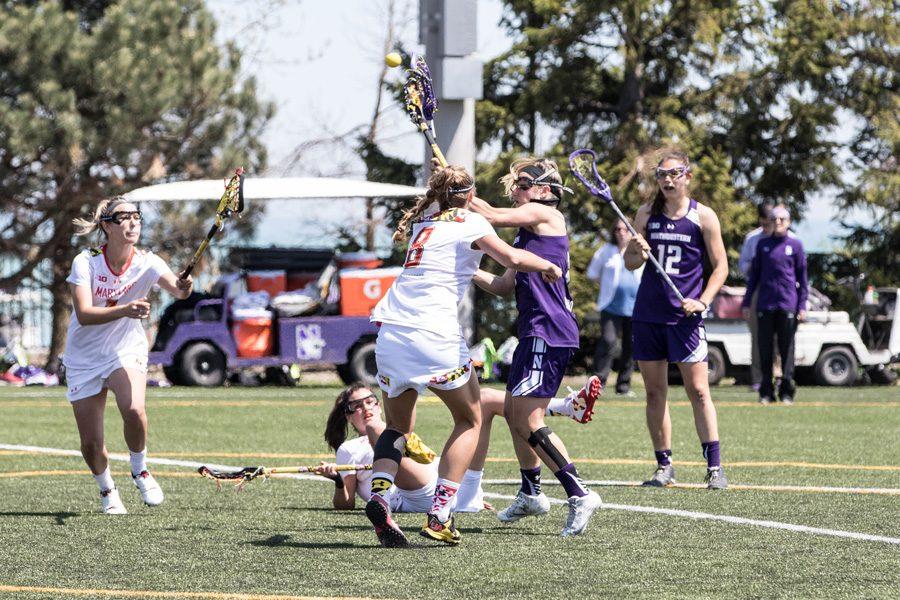 Christina Esposito tries to get around the defense. The junior attacker had trouble against Maryland, only scoring 1 goal on 3 shots.

Northwestern couldn’t overcome the luck of the Irish on Sunday, as Notre Dame ended the Wildcats’ season.

The Fighting Irish got out to an early 4-0 lead and never looked back. A combination of Notre Dame’s relentless pressure on NU’s clears and the Cats’ frequent turnovers prevented NU from clawing its way back into the game. The Cats finished the first half with 13 turnovers and only 3 goals.

It took NU nearly 12 minutes to open the team’s scoring, when junior attacker Christina Esposito capitalized on a free-position shot. Senior attacker Kaleigh Craig then took just 24 seconds to give NU its second goal of the game, but turnovers again kept the Cats from taking advantage of their momentum.

NU conceded another 2 goals before sophomore midfielder Selena Lasota scored for the Cats, and the team went into halftime trailing 7-3.

During the first half, NU only recorded 5 shots — including two one-on-one free-position opportunities that Craig could not capitalize on. Meanwhile, the Fighting Irish took 21 shots and put 13 on cage. Notre Dame kept exploiting the Cats’ turnover woes, forcing NU to foul in transition and allowing the team to set up its offense.

Despite freshman goalkeeper Mallory Weisse recording 6 first-half saves, the Fighting Irish’s barrage of free-position opportunities proved to be too much to handle.

Coming out of halftime, it was the same story.

The Cats continued to have difficulty holding onto the ball and had to resort to fouling. NU’s attackers couldn’t break the suffocating Notre Dame press and the hosts couldn’t miss. The Fighting Irish went on an 8-0 run in the second half while holding the Cats scoreless for a period of 35 minutes that extended into the end of the first half.

The team’s loss snaps a streak of 11-straight NCAA Tournament quarterfinals appearances. Last season, the Cats took down Notre Dame 16-11 to advance to the quarterfinals.

This season was an anomaly for the Cats’ seniors, who faced their toughest schedule during their collegiate careers. NU had to fight to earn an at-large bid in the tournament, and after downing Louisville in the first round, the Cats had a short bus ride back to Evanston.