The Daily Northwestern • May 12, 2016 • https://dailynorthwestern.com/2016/05/12/sports/womens-tennis-roundtable-writers-discuss-wildcats-ncaa-chances/ 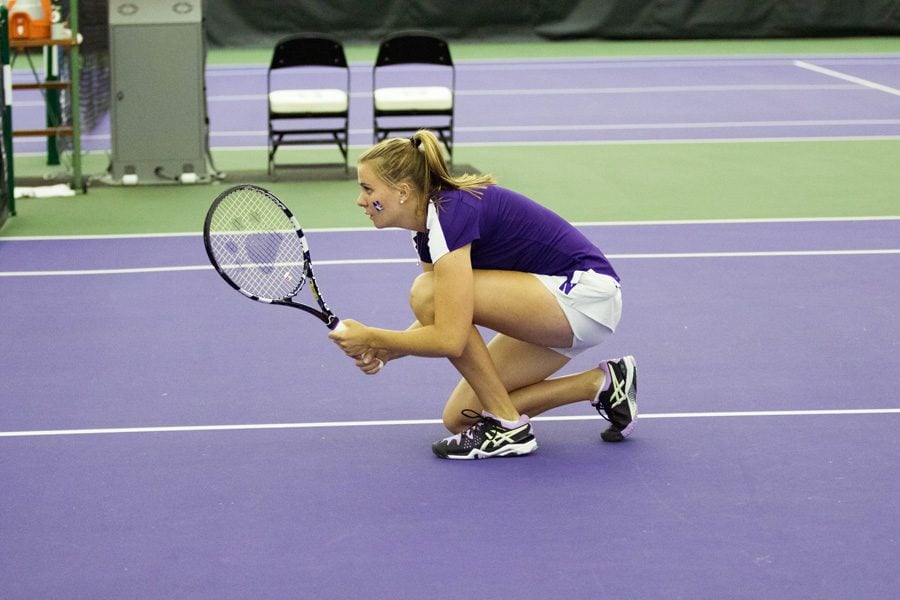 Erin Larner kneels before a doubles point. The sophomore is part of the Wildcats’ three-headed sophomore monster with a 9-6 record at the No. 1 singles spot.

The Wildcats started off slowly in 2016 thanks to a difficult schedule, but rebounded in Big Ten play. Northwestern received an at-large bid to the NCAA Regionals and will face Ole Miss in their first matchup Friday. Our writers discuss the Cats’ chances going forward.

1. NU only lost one game in Big Ten play and finished with a 13-10 overall record. Has this season been better or worse than the 2015 season when the Wildcats went 16-8 with a 9-2 conference record?

Robbie Markus: I would argue that this season has been worse than the 2015 season, simply because of how long it took NU to get some momentum this year. With a team possessing three sophomores in the top four singles spots, the Cats were one of the more inexperienced teams in the Big Ten. They really struggled against an incredibly tough non-conference schedule to kick off the season, going 0-6 against top 25 non-conference opponents. That being said, I think NU has shown a lot of growth over the course of the season, as is evident when looking at its conference record. The Cats are a completely different team going into the NCAA Tournament than they were when the season started.

Mike Marut: This season was markedly worse on paper, but in reality, a much better season than last year. In 2015, the team dealt with numerous injuries, including that of sophomore Maddie Lipp, who missed the whole season. Numerous times, coach Claire Pollard and the players mentioned how much more difficult the non-conference matches were but that they wanted the challenge. They didn’t want to succeed against pushover teams. They wanted to push themselves and earn respect. Nobody can knock the Cats this year for not having heart or trying. I think a season like this, coupled with many young players, will make NU a scary team next year. I would say with 95 percent certainty that they win the Big Ten title either in the regular season or the Big Ten Tournament next year.

2. Do the Cats have momentum going into the NCAA Regionals despite falling in the Big Ten Tournament?

Marut: NU does indeed have momentum going into the NCAA Tournament. Since the 2012-13 season, the Cats have not made it past the regional matchups. This year, they must focus on one match at a time in order to advance. NU and Ole Miss haven’t faced each other since the turn of the century, but in order to succeed in the postseason, the Cats will have to play near-perfect games to have a shot at returning to the Round of 16 like in 2012-13. Sophomore Alex Chatt mentioned that while the Big Ten title was one of the team’s goals, the NCAA title was a much bigger goal to reach — one they will not get to unless they play flawlessly.

Markus: I would agree with Mike that the Cats have momentum. NU’s biggest win of the season came at a crucial time when they defeated then-No. 10 Michigan on Senior Day. That win was a culminating moment for the Cats, as they finally showed that they can compete with the best schools in the country. Despite the fact that they fell to the Wolverines in the Big Ten Tournament, Pollard has taught her squad to rebound from tough losses all season, and the NCAA Regionals won’t be any different. Expect NU to come out firing on all cylinders as senior Alicia Barnett looks to make a statement in her final matches for the Cats.

3. How will NU fare in the NCAA Tournament?

Markus: In the first round, NU should come out on top in a close match against Ole Miss. The teams have a lot of similar qualities, as they’ve both shown the potential to compete against some of the best teams in the nation, but their strengths of schedule have diminished their overall record. The Cats are fully capable of competing with top-tier programs when they’re at their best, and with the winningest coach in Big Ten history by percentage on their side in Pollard, NU should edge out the Rebels. If the Cats get past Ole Miss, NU will struggle against No. 3 North Carolina, a team currently riding a 19-match winning streak. NU will need to play at its peak potential, but if everything goes right, the Cats have a slim chance of getting the win. If the Cats get past the Tar Heels, they should set their sights on a championship, but it’s doubtful that the Cats can take them out.

Marut: As I mentioned in the previous answer, first NU will have to take down Ole Miss. Again, the teams have not faced each other since 2000 so the onus is on the Cats to prepare themselves internally for (basically) a brand new opponent. Both teams have long streaks of making it to the NCAA Tournament, so neither can argue the opponent lacks experience in the postseason. NU has generally fared well against teams ranked lower than it, with some exceptions, so this contest should be no different. Beyond Ole Miss though, the Cats have not beaten a top-five team like North Carolina since beating the then-No. 2 University of Florida in the 2013-14 season. That long of a drought can prove costly, especially in a season where the only top-10 win was at home against a conference rival.

4. How will next year be different without senior Alicia Barnett?

Marut: Barnett played a major role for the Cats — being a friend to all and the lone senior on the team. With such a young team to back her up, NU’s squad will not change drastically. I see the Cats improving next year — as I mentioned above, the youth of this team will transition into veteran presence as three of the four top athletes are sophomores. Next year, if junior Manon Peri stays healthy, the team will undoubtedly be great. Pollard also plays a huge role in recruiting the best one or two players she can find. I would guess next year’s lineup would be sophomore Erin Larner at No. 1, Lipp at No. 2, Chatt or Peri at No. 3, the other of Chatt or Peri at No. 4, then a rotation of junior Jillian Rooney, junior Brooke Rischbieth and sophomore Rheeya Doshi at Nos. 5 and 6. I would also wager that freshman Lee Or will see the court at No. 6, but she will be splitting time with one of the older players regardless. Overall, NU will improve and find their way to a Big Ten title and beyond the regional round for the NCAA Championships.

Markus: First, it’s important to recognize that Barnett is the heart and soul of the team. She epitomizes its gritty, rough-and-tumble character, and the team’s vibe will certainly be different next year. That being said, NU will take a step up next year. The Cats only lose one player, so the team chemistry will remain entirely in place. Larner, Lipp, and Chatt — NU’s top 3 players — will all be juniors who have already competed against some of the top players in the country, ready to prove that they can perform like a top-tier program. On top of that, Peri, Rischbieth and Rooney will all provide veteran leadership at the back of the lineup, giving NU a solid team that should be in strong contention for the Big Ten Championship.