The Daily Northwestern • May 12, 2016 • https://dailynorthwestern.com/2016/05/12/campus/senate-confirms-seventh-cilento-supporter-to-cabinet-as-students-raise-concerns-about-political-ties/ 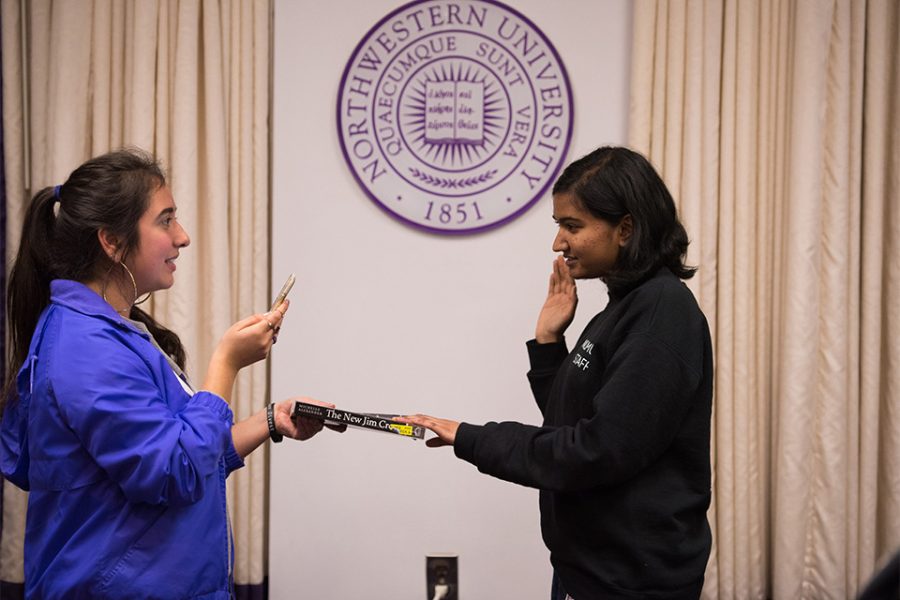 By comparison, the cabinet confirmed last spring comprised four students who endorsed former ASG president Noah Star’s ticket, four who supported his opponent and two who did not publicly endorse a ticket.

Cilento said public endorsements were not considered in the selection process.

“I don’t think about it necessarily in terms of who voted for us in the election,” Cilento told The Daily. “The selection committee talked extensively about the dimensions of every single candidate. … This wasn’t just us doing political wheeling and dealing. It was weighing the pros and cons of each candidate.”

Weinberg junior Lauren Thomas applied to be the vice president for academics, but the selection committee nominated Weinberg junior Ashley Wood, who was later confirmed.

Thomas, who served as election commissioner, issued a violation against the Cilento ticket for obtaining information about leaked voting margins. Thomas said she thinks the violation she issued, along with her conservative political beliefs, may have contributed to her not being nominated, despite her involvement with the academics committee since her freshman year.

“The presidential and vice presidential candidates and the selection commission have the right to choose whichever exec they think will be best,” Thomas told The Daily. “I don’t know why my vision wasn’t good enough for them. … (Christina and Macs) have a certain vision, so their supporters are the ones who fit that vision.”

Wood said although she hadn’t been involved in the academics committee in the past, her previous leadership positions outside ASG, such as on North by Northwestern and Northwestern Model United Nations, gave a “fresh perspective” to the committee.

Masoom’s nomination was initially rejected last week, but the selection committee renominated her. Last week, some senators expressed concern with Masoom’s support for Northwestern Divest. But Masoom said Wednesday that advocating divestment would not be a priority in her capacity as co-vice president for student life because she didn’t see it as the responsibility of the position. Instead, she said she would focus on destigmatizing mental health and sexual assault.

“Yes, I am fully aware that my nomination was failed last week,” Masoom said when addressing senators before the vote. “However, even after answering your questions last week, having my true motivations for holding this position questioned …  I am still committed to working to improve student life here at Northwestern and the process to get there is still worth it to me.”

Speaker of the Senate Nehaarika Mulukutla had to go through the voting process three times as more votes were received than voting senators in attendance during the first two times. Masoom’s nomination was confirmed with a vote of 28-8-1. Last week, her nomination fell one vote short of the two-thirds needed for confirmation.

Later in the meeting, Cilento and executive vice president Macs Vinson, a McCormick junior, presented ASG’s internal budget for the 2016-2017 fiscal year. More than $73,000 will fund ASG projects, including $10,000 for the student engagement stipend program, which failed to be disbursed this academic year.